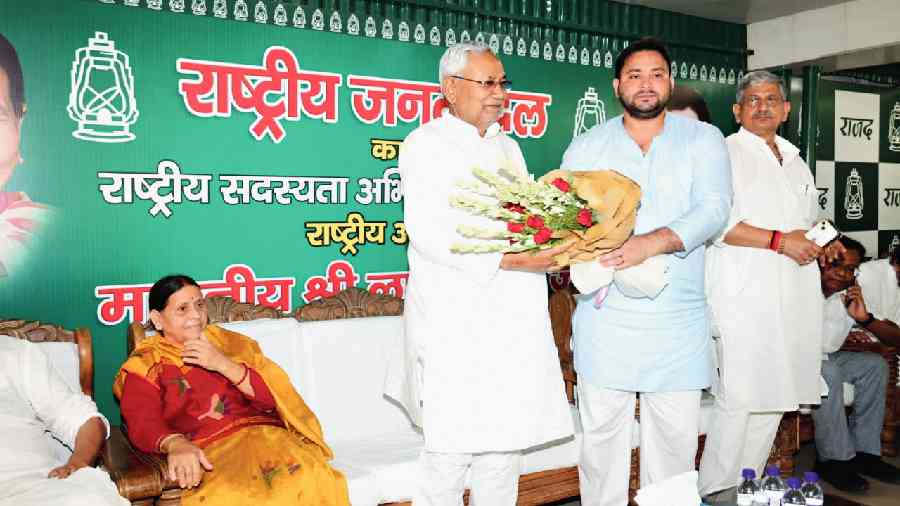 The BJP leadership appeared to be in shock on Tuesday, hit by ally Nitish Kumar’s exit in Bihar that will force the party to rework its strategy for the 2024 Lok Sabha polls amid fears of consolidation in Opposition ranks.

The leadership chose silence as Nitish, the last significant member of the National Democratic Alliance, walked out.

Nitish’s exit reinforces the perception that the BJP is squeezing out allies to gain complete dominance. Barring the AIADMK, which has no MP in the Lok Sabha, a faction of the Shiv Sena and the Bihar-based Lok Janshakti Party, the BJP is now left with no partner of any political worth.

The Bihar storm has hit the BJP hard when it was basking in the glory of capturing power in Maharashtra and reinforcing its might in the presidential and vice-presidential elections. The events in Bihar are likely to boost the Opposition’s morale in the run-up to the 2024 general election.

“The leadership was aware of Nitish’s uneasiness but was under the impression that he had no option but to stay with the BJP,” a BJP general secretary said, acknowledging that the JDU boss’s desertion had shocked the leadership.

Party insiders said home minister Amit Shah had tried to reach out to Nitish on Monday night to persuade him to change his mind. Reports in sections of the media briefly said that Shah had spoken to Nitish and everything had been sorted out. However, phone calls from Shah’s office quickly denied those reports.

As the leadership remained silent, the job of hitting out at Nitish and painting him as an “opportunist” was left to the Bihar leaders. Party MP Ravi Shankar Prasad, who was unceremoniously dropped as a minister in the Narendra Modi government, tried to deny the charge that the BJP was trying to split the JDU.

Internally, party leaders said the most disturbing aspect of Nitish’s swift desertion was that the BJP had now been left with virtually no partner in Bihar, a key state with 40 Lok Sabha seats. All the big and small parties, representing different backward and Dalit caste combinations, have now joined ranks against the BJP. The only party that remains with the BJP is the LJP, which itself stands torn in an internal tussle. Chirag Paswan, son of LJP founder Ram Vilas Paswan, is locked in a fight with his uncle Pashupati Paras. Paras is a minister in the Modi government.

“The social combination in Bihar will pose a big challenge for us. We are, however, hopeful that Narendra Modi’s popularity will override everything and we can once again win a majority of the Lok Sabha seats in Bihar,” a BJP leader said.

BJP managers recalled how the Modi factor had demolished the strong social combination challenge posed by the SP-BSP alliance in Uttar Pradesh.

“The same will be repeated in Bihar in 2024,” the BJP leader said while acknowledging that the real challenge would come in the Assembly polls next year.

The BJP’s fear was based on experience. The party had swept the 2014 Lok Sabha polls in Bihar without Nitish’s support but was defeated badly in the 2015 Assembly polls when Nitish, Lalu Prasad and the Congress joined hands.

Going ahead, corruption would be their biggest weapon to take on the coming together of the Mandal forces in the heartland state, BJP leaders said. They indicated that the central probe agencies would be activated in Bihar to dig out the alleged corruption of Lalu and his family members.