The book 'Nehru: The Debates that Defined India' is written by Tripurdaman Singh and Adeel Hussain 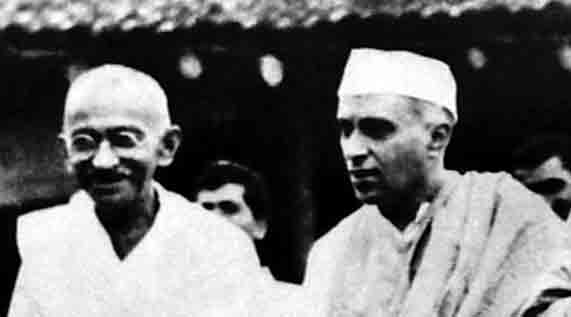 Jawaharlal Nehru while engaging with political opponents and colleagues, often fought for his corner, clarifying and structuring his own ideas in the process and in this intellectual combat, he did not even spare Mahatma Gandhi, says a new book.

Sharing the stage with political and intellectual figures who considered themselves his equals and peers, if not competitors, Nehru had to pit himself vigorously against them in the public realm, say Tripurdaman Singh and Adeel Hussain in their book Nehru: The Debates that Defined India.

"And in this marketplace of ideas, he had to fend off not only political opponents like Mohammad Ali Jinnah of the All-India Muslim League and Syama Prasad Mookerjee of the Hindu Mahasabha, but also colleagues like the Congress leader Sardar Patel, with whom he often disagreed," they argue.

"This was a challenge that Nehru took up with gusto. Engaging with them, arguing with them, debating with them and attempting to manipulate them, Nehru fought for his corner, clarifying and structuring his own ideas in the process," the book says.

"In this intellectual combat, he did not even spare Mahatma Gandhi, although he shied away from open confrontation with his mentor," it says.

Gandhi once described to Viceroy Lord Linlithgow after a debate with Nehru over the Quit India Movement that he (Nehru) had the capacity to argue for days together.

"Some of the most profound questions in South Asian history were debated this way, many of which continue to remain unresolved, bedevilling the contemporary world as intensely as they did Nehru's - for example, questions about Muslim representation, about the role of religion in public life, the sanctity and inviolability of Fundamental Rights, or India's relations with Pakistan and China," the book says.

According to the authors, through such sparring - often conducted directly and openly via speeches, correspondence and articles - ideological disagreements were voiced, political allegiances were forged and public opinion was moulded; and these hugely consequential debates decisively influenced political events, generating enduring repercussions.

The book, published by HarperCollins India, shines a spotlight on four consequential debates that Nehru engaged in: with the poet-philosopher Muhammad Iqbal, Jinnah, Patel and Mookerjee.

With Jinnah, Nehru exchanged rancorous letters on Hindu-Muslim relations and the demands of the Muslim League. With Iqbal, he contested the meaning of Muslim solidarity, and the role of religion and religious orthodoxy in public life, the authors say.

Patel and Nehru crossed swords over India's policy towards China and Tibet. And with Mookerjee, Nehru clashed in Parliament over civil liberties and the First Amendment to the Constitution, they add.

All four debates represent critical junctures in South Asian history, moments that decided which way the pendulum of events would swing, the book says.

"Each debate is thus a crucial part of the events that followed: unbeknownst to them, for example, Nehru and Jinnah's arguments were the opening act of Partition, in the same way as Patel's confrontation with Nehru contained the seeds of 1962," it says.

The authors are of the opinion that Nehru's personality, complex and contradictory in equal measure, heavily influenced his politics.

Combining hard work, charm, idealism and ruthlessness with vanity, petulance and frequent (and famous) outbursts of temper, Nehru's predilections and prejudices, his likes and dislikes, had a great bearing on his relationships with his contemporaries, and his engagement with their ideas, they say.

Nehru's political career was rooted not only in his vision, but also in the exigencies of practical politics and the personal relationships he shared - an aspect of his politics that admirers tend to play down as much as detractors like to play up, they add.