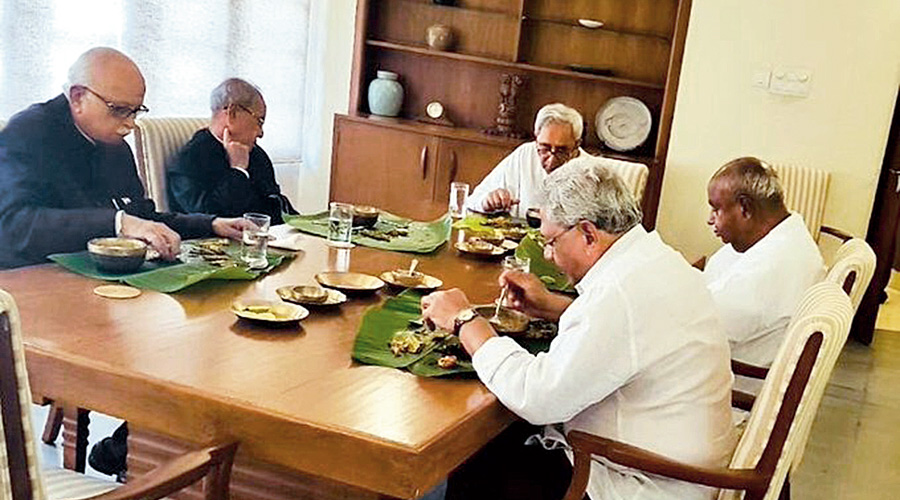 Odisha on Saturday observed Pakhal Divas with most people in the state eating the dish called pakhal (water rice) to beat the summer heat.

Even chief minister Naveen Patnaik admitted that pakhal was his favourite food and shared a picture of him having the delicacy along with former President late Pranab Mukherjee, former Prime Minister H.D. Deve Gowda, veteran BJP leader L.K. Advani and CPM general secretary Sitaram Yechury in 2018. The picture was taken when these leaders had visited Bhubaneswar for the release of The Tall Man Biju Patnaik, a book on Naveen’s father, and had lunch with him at Naveen Nivas.

Sharing the picture on his Twitter handle, Naveen tweeted: “It is always a pleasure to relish Odia cuisine, especially my favourite pakhal, which I have a special liking for. Remember fondly the appreciation of guests from outside the state and country whenever we served them pakhal. Wishing you all a happy Pakhal Divas.”

Traditionally pakhal is prepared by keeping leftover rice in an earthen pot with some water and a small amount of curd or lemon added to it. The rice gets fermented after seven to eight hours and turns into pakhal. It is relished most during the months of March, April, May, June and mid-July when the mercury soars.

To beat the scorching summer, the rice after being cooked is cooled in a bowl of water.

“No one can think of life without pakhal during summer. It has been a tradition since generations. But the dish got a national and international identity only a few years ago,” said Uma Patnaik, a roadside vendor.

“One can get a sumptuous lunch comprising pakhal and other items at Rs 100. The water in the fermented rice is known as torani and keeps the body cool and prevents sunstroke. People who toil in the sun have pakhal as it replenishes the salt and water lost by the body. Even at the Shree Jagannath temple in Puri, pakhal is served to the Lord,” said Raja Prasad Mohanty, a small businessman.

While people mostly eat pakhal with various kinds of fried items, including fish, the poor have it just with onion and it tastes just as good. “It’s a poor man’s delight,” said Madhusmita Pradhan, a foodie.