Advertisement
Home / India / Natasha Narwal, Devangana Kalita walk out of Tihar prison
'They won't be able to threaten us with jail' 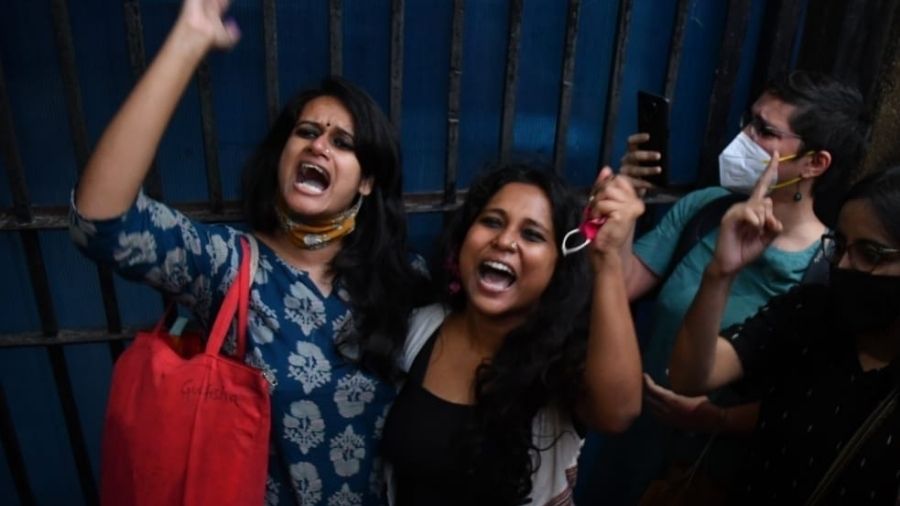 Student activists Natasha Narwal and Devangana Kalita walked out of Tihar prison on Thursday, hours after a court here ordered their immediate release in the north-east Delhi riots "conspiracy" case.

The order came two days after the Delhi High Court granted bail to Narwal, Kalita and Asif Iqbal Tanha, who were arrested in May last year under the stringent Unlawful Activities (Prevention) Act (UAPA).

A senior jail official said Kalita and Narwal have been released from the Tihar prison as per court orders received.

Asif Iqbal Tanha was released around 7.30 pm after the completion of formalities.

"It shows the desperation of the government... We are women who are not scared of them," Kalita told reporters after coming out of the jail gates, amid a sea of supporters shouting slogans, as per a report by ndtv.com. "We survived because we received tremendous support from friends, from well-wishers. I thank them all," she said.

Narwal said she doesn't want to comment on the case as it's still in court. "However, we would like to thank the Delhi High Court for upholding what we believe in. Any such protest that we have done is not terrorism. It was a democratic protest, led by women," Narwal said.

"They won't be able to threaten us with jail. If they threaten to incarcerate us, that will only strengthen our resolve to carry on our fight," Narwal said. Her father, Mahavir Narwal, died of Covid in May while she was in jail. Her brother, who came to receive her, said they miss their father, who if alive would have come to greet her on walking out of jail.

"We should ask ourselves, how did we reach such a point where the line between terrorism and dissent has been blurred?" Narwal told NDTV. "People are jailed with frivolous charges. When people protest, it is not terrorism," she said.

The three student activists were not released from the prison on time over delays in verifying their addresses and sureties.

In its order for the immediate release of the trio, the Delhi court said the delay in the verification process by the police could not be a plausible reason for the accused to be kept imprisoned.

After securing bail from the high court, the activists had moved the trial court, seeking immediate release from prison.

When the trial court deferred the order on their plea for Thursday, they moved the Delhi High Court, which ordered the lower court to proceed with the issue with "promptitude and expedition".

The students, who have already spent over a year in jail, surviving two Covid-19 waves, were obliged to spend more time in jail. A sessions court judge held off Wednesday on ordering the immediate release of the students on bail after Delhi police demanded three days to verify the addresses of the accused and the sureties posted by them.

The three student activists were arrested in May 2020 and are accused of being the "masterminds" of the February 2020 violence, which left 53 people dead and more than 200 injured.

The high court, while granting them bail on June 15, had observed that "in an anxiety to suppress dissent, the state has blurred the line between right to protest and terrorist activity" and if such a mindset gains traction, it would be a "sad day for democracy".

The High Court said “... that in its anxiety to suppress dissent and in the morbid fear that matters may get out of hand, the state has blurred the line between the constitutionally guaranteed ‘right to protest” and “terrorist activity.” The two-man bench went on to add that: “If such blurring gains traction, democracy would be in peril.”

Delhi police on Wednesday petitioned the Supreme Court to cancel Tuesday’s bail to three student anti-CAA protesters, and appeared to be relying on certain technicalities in the trial court to try and delay their release from prison.

Delhi police, who are under the control of the Centre, have in the plea to the apex court argued that the accused, charged under the anti-terror law UAPA, could tamper with evidence and intimidate witnesses unless their bail was quashed.

The apex court is expected to hear on Friday the police’s challenge to Delhi High Court’s bail order, with solicitor-general Tushar Mehta likely to appear for the government.