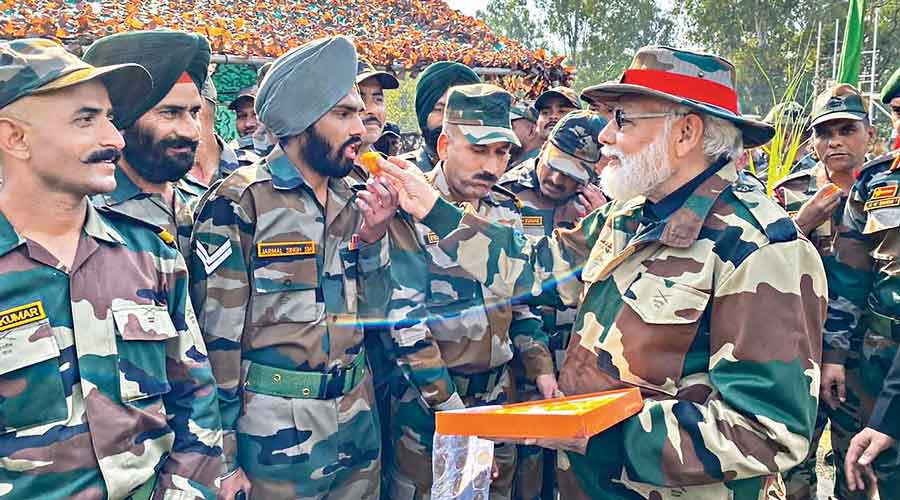 Prime Minister Narendra Modi celebrated Diwali with soldiers in Pir Panchal where he recalled the 2016 surgical strike in adjoining Pakistan-occupied Kashmir but made no mention of the recent three-week-long operation against militants in this Jammu region that has claimed the lives of nine soldiers.

Security forces are yet to neutralise any of the militants in the Pir Panjal region despite putting thousands of boots on the ground and searching a vast area. The forces are investigating reports that the militants might have fled to Kashmir’s Shopian district.

The Prime Minister marked Diwali with soldiers in the Nowshera area of Rajouri, a two-hour ride from Surankote and Mendhar in Poonch where the encounter started on October 11 and soon spread to Thana Mandi in Rajouri. Poonch and Rajouri are together called Pir Panchal and both districts are on the Pakistan border.

“The role played by this brigade in the surgical strike fills the hearts of every citizen with pride. I will always remember that day,” Modi told the soldiers, recalling how dearly he wanted all the troops involved in the cross-border operation to return before dawn.

“I was constantly on the phone at the time of the surgical strike. I wanted to ensure that each soldier who was part of the strike should return safely. All the soldiers who carried out the strike made me feel proud by returning to their unit safely,” the Prime Minister added.

A fidayeen attack in 2016 in the Valley’s Uri that killed 19 soldiers was the trigger behind the surgical strike during which the Indian Army crossed the border and claimed to have destroyed several militant “launch pads”.

Modi said on Thursday that the attempts to disturb peace “continue to happen today”, adding that “terrorism” had received a “befitting reply” every time.

October 2021 has been the bloodiest month in Jammu and Kashmir since the August 2019 scrapping of the state’s special status. The violence has taken place despite the Modi government’s repeated claims that the 2019 decisions will help restore peace. In all, 13 civilians, 12 soldiers and 20 militants have died this October.

The dead include several members of minority communities in Jammu and Kashmir and the nine soldiers who lost their lives in the Poonch-Rajouri operation. The operation is believed to have ended but the army is yet to call it off formally. On October 31, the forces threw the national highway leading to Poonch open after 20 days.

Modi, during his speech, chose to reflect on the past glories of the army, recollecting how Nowshera’s history celebrates the bravery of India and its present is the embodiment of the courage and determination of the soldiers.

The Prime Minister told the soldiers that spending Diwali with the armed forces was for him like celebrating the festival with family.

“Every Indian will light a diya to convey his or her wishes for the brave soldiers of the country,” he said.

Modi said connectivity in border areas had improved — be it from Ladakh, Arunachal Pradesh, Jaisalmer or the Andaman and Nicobar Islands.

“Borders and coastal areas lacking normal connectivity now have roads and optical fibres, and this boosts deployment capabilities as well as facilities for soldiers,” he said.