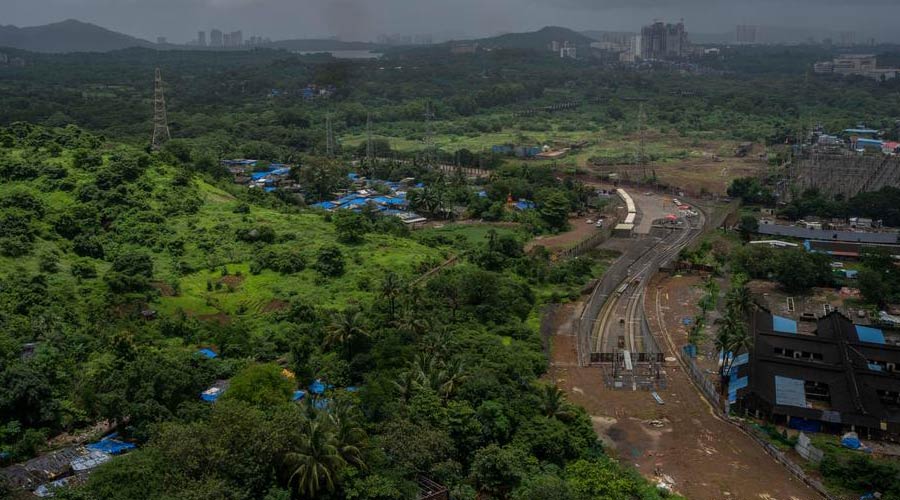 The construction of a metro project would cause irreversible damage to the area's ecological diversity, say activists.
Deutsche Welle
Deutsche Welle   |   Published 13.08.22, 05:15 PM

Locals and activists in Mumbai fear thousands of trees will be knocked down to make way for a new transportation project, resulting in ecological destruction and endangering wildlife in the area.

"Anyone destroying the forest is destroying our gods," said Vanita Rajesh Thakre, who belongs to one of the tribal communities living in the Aarey Forest, located in the heart of Mumbai city, India's financial capital.

"We have a deep relation with the forest. We get our food, medicines and livelihood from the forest. Our gods live in this forest."

Tribal communities, like Thakre's, and environmental activists have been protesting against the state government's plans to push ahead with the construction of a multilevel parking unit for the city's metro rail in a part of the forest.

They fear thousands of trees will be knocked down, resulting in ecological destruction and endangering wildlife in the area.

Aarey Forest — known locally as the Aarey "milk colony" — is an ecologically sensitive zone in the center of Mumbai. It is part of the same forest as Sanjay Gandhi National Park, a protected area in the city.

But in 2016, the state government at the time allocated 33 hectares (around 81 acres) of the 1,300 hectare forest for the metro rail parking unit, triggering intense public opposition.

The top court then ordered authorities to stop the cutting down of trees in the area, although it did not halt the construction of the metro unit.

'It is a constitutional crisis'

During a court hearing last week, the Maharashtra government contended that no new trees had been cut in Aarey since 2019.

But activists say that isn't true. They allege that felling and removal of trees has continued unabated despite the top court's ruling.

"This is not an environmental crisis anymore. It is a constitutional crisis that an elected government is refusing to acknowledge the order of the Supreme Court and doing as it pleases," said environmental activist Sanjiv Valsan.

Stalin Dayanand, director of the NGO Vanashakti, said trees were not being "cut" but were being knocked down using bulldozers, circumventing the court order. "There are tree maps and photographs that show how much damage is being done to Aarey," he said.

Another concern is that the construction would cause irreversible damage to the diversity found in the area.

Aarey is home to rich flora and fauna, including mammals such as leopards, reptiles such as cobras and Russell vipers, birds and species of insects and wildflowers.

In 2019, a new species of jumping spider, Jerzego sunillimaye, was discovered in Aarey.

The area also contains species listed on the International Union for Conservation of Nature's red list of threatened species. The leopards in Aarey are classified under the near-threatened category.

"These animals do not treat the SGNP and Aarey differently," said Nikit Surve, a researcher with the Wildlife Conservation Society in India, referring to the Sanjay Gandhi National Park. "Camera traps show that they use these areas as part of their territory, but it also does not mean that they live there exclusively."

How crucial are urban forests?

Valsan said the government is ignoring major ecological concerns by pushing ahead with the construction.

"Aarey, being a flood plain of the Mithi River, by the concretization of the earmarked area will pose a flood risk for neighboring areas and could result in the flooding of the area occupying the Mumbai international airport, as well as Marol and Saki Naka areas during heavy rains," he said.

According to a 2017 report, the per capita tree density of Mumbai was just 0.28, compared to an ideal tree-human ratio of seven trees for every person. It highlighted the pressing need to protect Mumbai's endangered tree density.

"Urban forests are crucial for several reasons, both socially and ecologically," said Kanchi Kohli, senior researcher at the Centre for Policy Research in New Delhi. "Ecologically, urban forests and other green spaces can help cities mitigate pollution, congestion and maintain other environmental functions like water recharge."

It's this way of life that locals and environmental activists say their "Save Aarey" campaign is trying to protect.