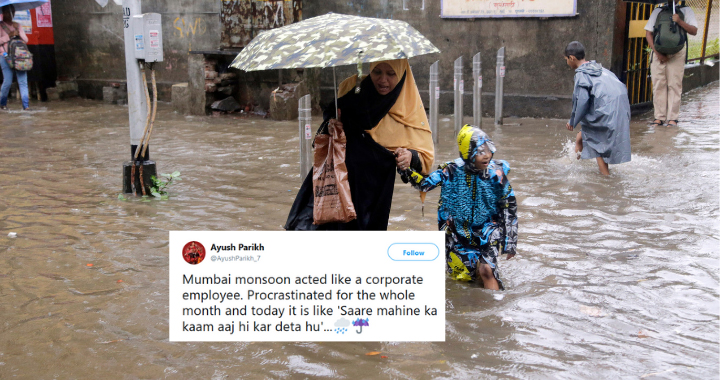 The Indian Meteorological Department said rains were likely to continue throughout the day
AP photo
The Telegraph   |     |   Published 28.06.19, 12:59 PM

Mumbai is under water, again.

Heavy rainfall led to flooding in many parts of the megacity and caused inconvenience for commuters. Traffic congestion was reported in some areas, including Dharavi and the Western Express Highway. However, local train services were unaffected, giving some relief to city residents.

The Indian Meteorological Department said rains were likely to continue throughout the day. It would remain cloudy and parts of Mumbai would receive very heavy rainfall, according to the department.

Wednesday. The first showers came a day after the arrival of the monsoon in Maharashtra was announced.

Hundreds of commuters were left stranded on roads because of the heavy rain.

Mumbaikars took to social media to share their angst and poke fun at their own misery. They highlighted how the city’s infrastructure was tottering on the verge of collapse on the first day of heavy rain.

Kings come and go.
But when it rains, Mumbai keeps flooding.

Some mentioned the problems city residents are facing:

Many spoke out on how app cab and autorickshaw drivers were milking the situation:

Reaching offices on time became a cause of concern:

Interviewer: What is your greatest strength?

Me: Reaching office on time during #MumbaiRains

Others just had fun:

#MumbaiRain #mumbaimonsoon
Me after waking up, finding a reason to not go to work pic.twitter.com/vEZOcw4VOX

It just takes 30 mins of #MumbaiRains for an average Mumbaikar to go from - Oh Wow! -to- What the Hell!

Standing at the door of a local train during #MumbaiRains. pic.twitter.com/kNevInO9t1