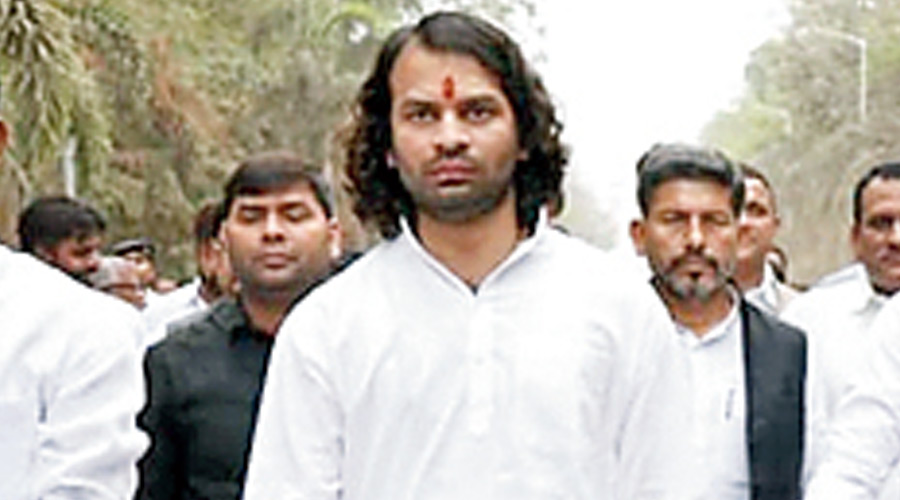 Turmoil in RJD president Lalu Prasad's family over the theatrics of his mercurial elder son Tej Pratap Yadav seems far from over.

The legislator visited the residence of mother Rabri Devi on Tuesday evening, spent the night at her place and, according to party sources, announced that he will henceforth not be living at the bungalow allotted to him by the state government.

The "reunion" has brought more anxieties than delight to the family which is yet to come to terms with Tej Pratap's cryptic tweet on Monday in which he had expressed his wish to hand over his "resignation" to his father.

The party, which is controlled by its all powerful founding chief and heir apparent Tejashwi Yadav, the younger son, is at present rattled by the controversy that has arisen out of a junior-level functionary's serious accusations against Tej Pratap.

Ramraj Yadav, who heads the city unit of RJD's youth wing, has alleged that he was stripped and beaten up by henchmen of the temperamental leader who also threatened to get him eliminated.

Alarmingly, Ramraj has alleged that the incident took place last week at Rabri Devi's residence when it was teeming with visitors invited to an Iftar party hosted by Tejashwi, who also lives with his mother.

Sources close to Tej Pratap say he might have decided to live in his mother's 10, Circular Road bungalow on the suspicion that Ramraj's allegations were a conspiracy hatched against him by detractors in the party.

While Tej Pratap has tried to come to terms, with limited success, to the greater clout that his younger brother enjoys, his feud with key leaders close to the Tejashwi, including state president Jagadanand Singh, is an open secret.

Incidentally, Jagadanand Singh has been, so far, the only RJD leader who said he had knowledge of Ramraj's charges.

"Ramraj had telephoned me and narrated his ordeal. I have taken note of his complaints. But unfortunately taking action against Tej Pratap is not in my hands. He is an MLA and not a mere state unit leader," Singh told reporters, barely concealing his sense of hopelessness.

Tej Pratap's loyalists, however, claim that the alleged assault had never taken place and Ramraj was acting at the behest of Singh, Tejashwi's key political aide Sanjay Yadav and MLC Sunil Kumar Singh. Neither Sanjay Yadav nor Sunil Kumar Singh has reacted to this latest round of controversy surrounding the pugnacious elder son of the party supremo.

Some RJD leaders, however, see a ray of hope in the possible release of Lalu Prasad by next week as he has been granted bail in fodder scam cases by the Jharkhand High Court.

Meanwhile, Tej Pratap's loyalists, dismissed as "sycophants" by the RJD rank and file in general, maintained that he is a serious politician who plans to hold janta darbar , like his father did in his hey days, from next month, besides embarking on a state-wide 'yatra' (tour).

The RJD MLA currently represents Hassanpur in Samastipur district, having shifted base from Mahua in Vaishali where he made his debut but grew massively unpopular during his tenure.