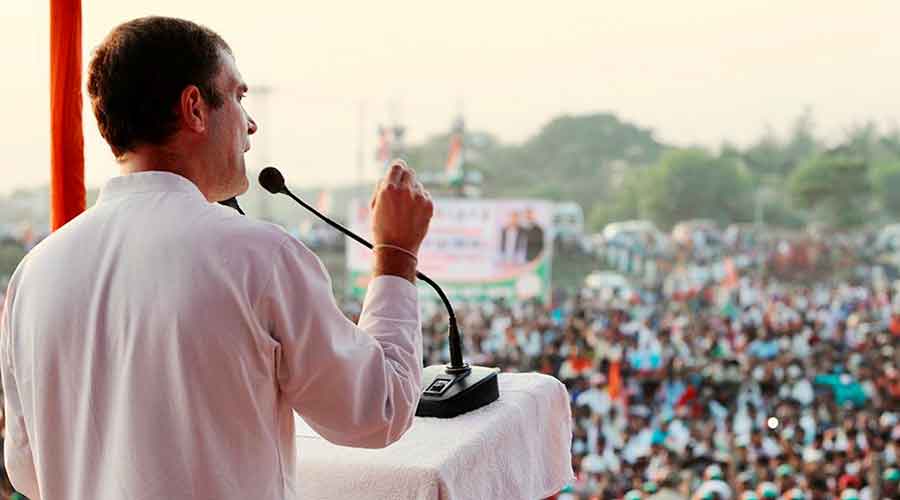 Congress leader Rahul Gandhi attacked Prime Minister Narendra Modi on Wednesday, throwing at him "chai and pakoda" jibes and accusing him of "not talking about issues confronting India” such as unemployment but speaking only about other countries.

On his second round of campaigning for the ongoing state elections, Rahul addressed two back-to-back rallies -- one at Valmiki Nagar in West Champaran and the other at Kusheswar Asthan in Darbhanga -- and also assailed Bihar chief minister Nitish Kumar over issues of unemployment, migration and poverty.

At his first rally at Valmiki Nagar, the former Congress president once again criticised the three farm laws, the government’s handling of the migrant crisis and demonetisation, and alleged Modi and Nitish "control the media".

Rahul said angry farmers in Punjab burnt effigies of Prime Minister Modi on the occasion of Dusshera which "pained" him. "If I tell you the truth, I did not like it. Because after all Narendra Modiji is our Prime Minister, the country’s  Prime Minister.

"Usually effigies of Ravana, Kumbhakarna and Meghanada are burnt on Dusshera. But it is for the first time that the effigies of Narendra Modi, Ambani and Adani were burnt," he said.

"I saw it for the first time (that a Prime Minister’s effigy was being burnt on the occasion of Dusshera). You did not get to see it may be because Nitishji and Modiji control the media," he told the crowd at the Darbhanga rally.

He said small shopkeepers, youths, farmers and labourers are today "angry" with Modi at the national level and Kumar in Bihar. He also alleged the reason the Prime Minister’s effigy was burnt was that "what Nitishji did in Bihar in 2006, Modiji is doing in Punjab, Haryana and across the country.”

He said the "pilot project" for the three farm laws -- the Farmers Produce Trade and Commerce (Promotion and Facilitation), the Farmers (Empowerment and Protection) Agreement of Price Assurance and Farm Services and the Essential Commodities (Amendment) Act was run in Bihar.

The Congress has been vehemently opposing the farm laws, alleging it will destroy the mandi system, end the MSP regime and leave farmers at the mercy of big corporates. All the charges have been rejected by the Centre.

"In 2006, it started much earlier in Bihar. Your backbone, your farming system, MSP and procurement system were abolished. Today, the youth of the nation cannot get employment," Rahul told the gathering.

As he was in the middle of his speech, talking about migration and unemployment, a person from among the crowd shouted "he (Modi) asks us to fry pakodas".

"Did you fry pakodas?” Rahul responded jovially, drawing applause and cheers from the crowd. “Next time they come, fry pakodas and offer some to Nitishji and Modiji," he mockingly said.

In January 2018, Modi had said in a TV interview that people earning Rs 200 a day by selling pakodas cannot be considered unemployed, a remark often ridiculed by the Congress.

At his rally in West Champaran, Gandhi said, "The Prime Minister had come here a few years ago. He is again coming in the next two days. He had said it’s a sugar belt, will operationalise sugar mills and have tea prepared with local sugar on my next visit. Do you remember? Did he have tea with you? No."

He said the Prime Minister and the Bihar chief minister used to raise the issue of unemployment earlier but no longer now. "Youths and farmers of Punjab and Bihar and youths of Uttar Pradesh are angry that our PM keeps making speeches with Bihar Chief Minister and talks about sugar, tea and other countries, but not about the problems confronting our country such as unemployment," he said.

"Now, the PM does not say in his speeches that he would give two crore jobs. Because the people of Bihar have realized that he had lied.

"I can guarantee that if the PM comes today and promises two crore jobs to youths, perhaps the crowd would shoo him away, telling him that he had lied," Gandhi said.

He said the people of Bihar gave 15 years to Nitish Kumar as chief minister and six years to Modi as Prime Minister yet "Bihar is the poorest state".

"I want to see the day when youth from other states come to Patna to find employment," he said.

He said India today cannot create jobs and the "neighboring countries have marched ahead of us. He said the ongoing elections in Bihar was about the states future and not about "Lalu ji's family, Nitish jis or my family."

“If the Congress comes to power it will be a government of all castes and religions,” he added. "We know how to run the country, we know how to stand with farmers, we know how to give employment to the youth. But there is definitely a shortcoming in us that we do not know to lie, we cannot compete with them in lying," he said.

He also praised RJD leader and the mahagathbandhan chief ministerial candidate Tejashwi Yadav, saying he wants to give a new perspective and talks about employment.