However, the bench did not specify whether it would take on record the audio clip. 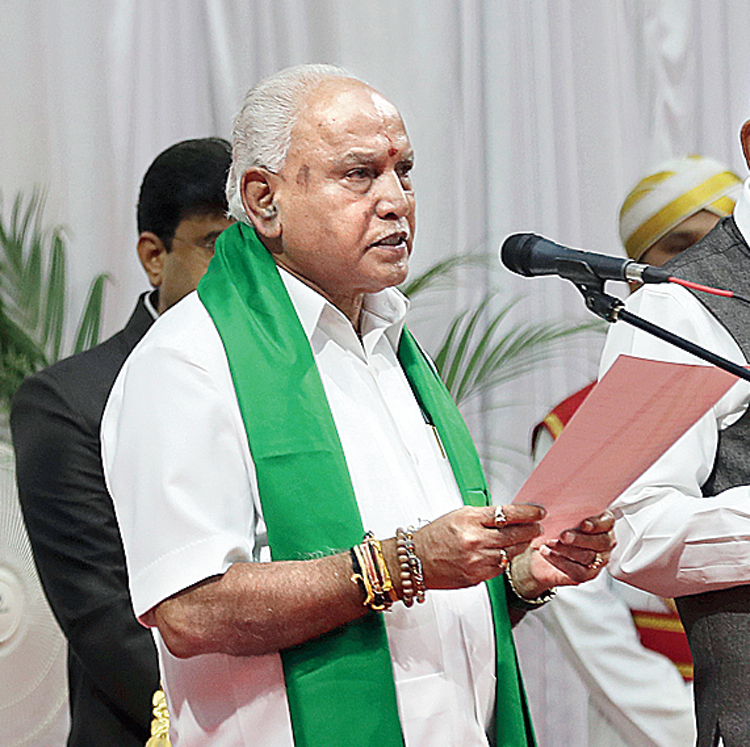 A purported audio clip of CM B. S. Yediyurappa expressing anguish against his party leaders over their opposition to giving tickets to the disqualified MLAs for the December 5 Assembly bypolls constituencies had surfaced last Friday.
(AP)
PTI   |   New Delhi   |   Published 05.11.19, 08:02 AM

The Supreme Court on Tuesday said it would consider the fresh audio clip in which Karnataka chief minister B. S. Yediyurappa is purportedly referring to 17 rebel Congress-JD(S) MLAs, who had been disqualified.

A three-judge bench headed by Justice N. V. Ramana said since the issue has been brought to its notice, the apex court would consider it. However, the bench did not specify whether it would take on record the audio clip.

The top court said the issue raised now was also brought before it during the hearing on the pleas filed by these MLAs challenging the then speaker's decision to disqualify them.

A purported audio clip of Yediyurappa expressing anguish against his party leaders at a recent party meeting in Hubballi over their opposition to giving tickets to the disqualified Congress-JD(S) MLAs for the December 5 Assembly bypolls in 15 constituencies had surfaced last Friday.

In the audio, he is purportedly saying that the rebel Congress JD(S) MLAs, who were later disqualified, were kept in Mumbai during the final days of the coalition government under BJP national president Amit Shah's watch.

Bypolls to 15 out of 17 seats represented by disqualified MLAs will be held on December 5.

Senior advocate Kapil Sibal, appearing for Karnataka Congress, told the bench that in the audio clip, Yediyurappa has said during the core committee meeting of the BJP that the whole thing was 'engineered' by BJP national president, who is also the Union home minister.

He said since the top court has reserved its verdict on the batch of petitions filed by 17 disqualified MLAs challenging the then speaker's decision to disqualify them, they want to place the audio clip on record.

'You have extensively covered everything in the arguments,' the bench, also comprising Justices Sanjiv Khanna and Krishna Murari, told Sibal.

Sibal, however, told the bench that the audio clip has come into light after arguments were over in the apex court.

'Order of the speaker has to be tested. If you want to place additional evidence on record then we will have to issue notice,' the bench said, adding, 'You have brought it to our notice, we will consider it. Allow us to deliver the judgement'.

The bench also told Sibal that during his arguments, he had already referred to the hospitality being provided to these MLAs at Mumbai, allegedly by the BJP.

The Karnataka Congress has requested the top court to take on record the audio clip in which Yediyurappa is purportedly hitting out at his party leaders for not recognising the 'sacrifice' of the disqualified Congress-JD(S) MLAs, because of whom the BJP could come to power in the state.

The speaker had disqualified 17 lawmakers as MLAs, ruling that they cease to be MLAs with immediate effect till the expiry of the 15th assembly in 2023.

The top court had on October 25 reserved verdict on the batch of petitions challenging the disqualification of the 17 Karnataka MLAs before the trust vote moved by the previous H D Kumaraswamy government.