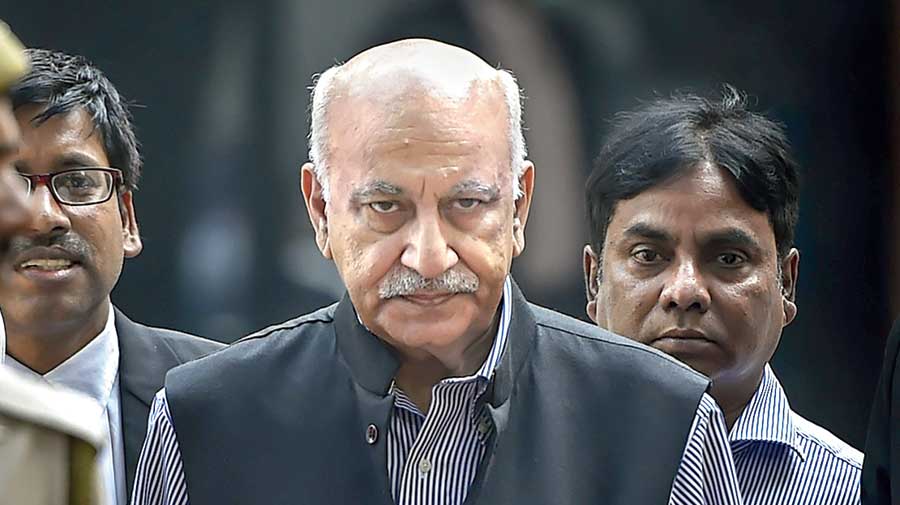 A Delhi court has dismissed a defamation case filed by former Union minister and editor M.J. Akbar against journalist Priya Ramani for levelling allegations of sexual misconduct against him, marking a milestone moment in the “Me Too” movement in India.

The court also accepted her contention that the complainant — a former deputy external affairs minister in the first government headed by Narendra Modi — “is not a man of stellar reputation”.

As the judge left the courtroom, journalist Natasha Badhwar, who was there to express solidarity with Ramani, cried out: “Thank you, Sir!”

Akbar, the founder editor of The Telegraph who headed the newspaper till 1989, resigned from the Union government in 2018 after several women journalists accused him of sexual harassment. Akbar continues to be a BJP Rajya Sabha MP.

Ramani had named Akbar as the person who had sexually harassed women colleagues and herself in 1993. Wahab, another journalist, had accused Akbar of molesting and hounding her in 1997.

Ramani said on Wednesday: “I feel vindicated on behalf of all the women who have ever spoken up against sexual harassment in the workplace. Sexual harassment at the workplace has got the attention it deserves, despite the fact that it was me, the victim, who had to stand up in court as the accused.”

She added: “I believe my victory will inspire more women to speak up about SH at the workplace. I also hope it will deter powerful men from attempting to intimidate victims by taking them to court in false cases.”

Wahab tweeted: “A day to remember that #MeToo is not a movement. It’s a consciousness about demanding and expecting safe workplaces, whether at home or outside. Women, who can, must always stand up for themselves, and for those who are unable to stand for themselves #PriyaRamani.”

Ramani’s counsel Rebecca John, who fought the case pro bono, received an ovation from those gathered outside the courtroom.

John told reporters: “Truth in public interest and for public good has been accepted as a defence for defamation…. This was probably the most important case of my career.”

The lawyer made no mention of it but the judgment has been delivered at a time defamation charges have been used as a weapon to intimidate journalists and media outlets.

The court said: “The attack on the character of sex abuser or offender by sex abuse victim is the reaction of self-defence after the mental trauma suffered by the victim regarding the shame attached with the crime committed against her.

“The woman cannot be punished for raising her voice against the sex abuse on the pretext of criminal complaint of defamation as the right of reputation cannot be protected at the cost of the right of life and dignity of woman as guaranteed in Indian Constitution under Article 21 and right of equality before law and equal protection of law as guaranteed under Article 14 of the Constitution.

“The woman has a right to put her grievance at any platform of her choice and even after decades.”

Before the court proceedings began on Wednesday, Akbar and Ramani waited at two opposite ends of the corridor outside courtroom 203 at the Rouse Avenue District Courts in the capital.

In the court, the former minister was flanked by his sister and several police personnel, and Ramani by her husband and journalist Samar Halarnkar as well as several women journalists.

Halarnkar held Ramani’s arm as the judge read the conclusion, while Akbar looked down. Ramani and Halarnkar have taken more than two dozen flights between Delhi and Bangalore where they live since the case began, leaving their children in the care of her parents who would fly down from Mumbai.

As soon as the verdict was delivered, Akbar left with his legal team. Akbar was represented by lawyer Geeta Luthra.

A source in Akbar’s legal team said they would decide on whether to appeal after reading the judgment.

A US-based former colleague had accused Akbar of raping her in 1994, a charge the former editor and his wife have denied, describing the relationship as consensual.

The case, which started in October 2018 in the Patiala House Courts, was shifted to the Rouse Avenue District Courts, which were inaugurated in April 2019. The case was transferred from the special court for MPs and MLAs by Delhi High Court in November last year at the final stage of hearing.