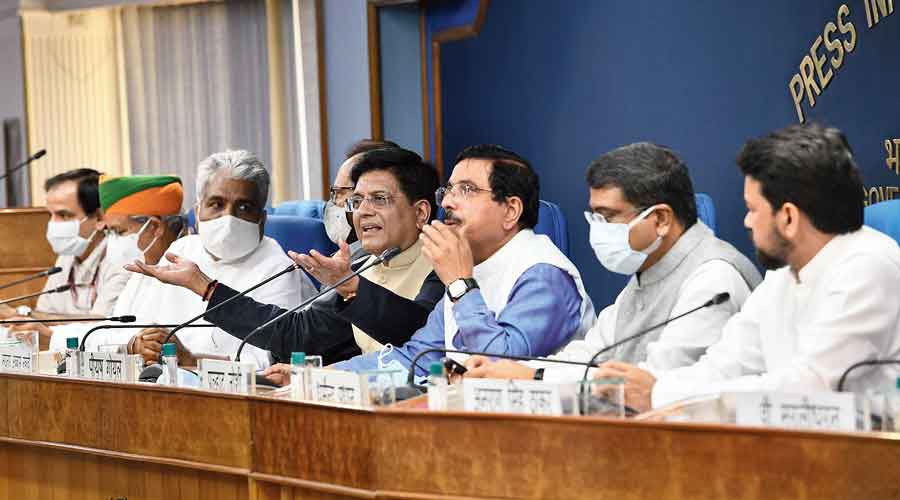 The Centre on Thursday fielded eight ministers to launch a counter-attack on the Opposition, accusing it of threatening behaviour, denigrating Parliament and seeking an apology and strongest possible action.

The eight ministers were fielded in response to the Opposition’s attack on the government over the ruckus in the Rajya Sabha on Wednesday.

The ministers took turns to attack the Opposition, claiming there was an attempt to “strangulate” the Rajya Sabha marshals and denigrate the Chair, before demanding an “apology to the country”.

Parliamentary affairs minister Pralhad Joshi claimed the Opposition had “threatened a disastrous situation” if the government tried to pass more bills after the passage of the OBC bill.

“In the morning itself (on Wednesday), we were threatened. I am using the words very carefully,” Joshi said. “We were threatened that if we try to pass the insurance and other bills after the OBC bill, there will be a more disastrous situation than what had happened yesterday,” he added, pointing out that the government decided to end the monsoon session two days before schedule because of the threat.

Joshi claimed the threatening words were “clearly and unambiguously” addressed to the government when it approached the Opposition seeking cooperation to pass the bills.

The minister said they had met Rajya Sabha Chairman Venkaiah Naidu and demanded “strong action” against the Opposition members to prevent a repetition of such misconduct. “I demand that if they have little sense of responsibility and democracy, they should apologise to the country,” Joshi said.

After Joshi, leader of the House in the Rajya Sabha, Piyush Goyal, took over and accused the Opposition of trying to divert attention by making claims on manhandling of MPs by marshals to escape action for their “shameful conduct”.

He firmly denied the Opposition charge that outsiders were deployed inside the Rajya Sabha. “A total of 30 marshals were there, 18 men and 12 women. No outsiders,” Goyal claimed.

His claim, however, didn’t match the statement issued by Naidu’s office.

The statement added: “They (RS officials) also informed that only 13 marshals were deployed to start with and was gradually scaled up to 42, based on the situation in the House.”

Asked why the government couldn’t break the stalemate as the Opposition was only demanding a discussion on the Pegasus row in both Houses, Goyal said a suo motu statement had been made by information technology minister Ashwini Vaishnaw.

“A suo motu statement (on Pegasus) was given by the minister. In the Rajya Sabha, the Opposition would have got ample opportunity to seek clarifications and ask questions,” Goyal said.

The Opposition had demanded a detailed discussion and clarification from home minister Amit Shah on the Pegasus row as it involved national security.

On the allegation that bills were passed without discussion, the ministers said the government was ready but Opposition rejected it.

“It was pre-decided by the Congress and its friendly parties that they will not allow Parliament to function,” Joshi said. He justified the passage of bills amid the din, saying it was “basic duty of Parliament to pass bills”.

The ministers said they had demanded a high-level inquiry into the ruckus inside the House on Wednesday and “strongest possible action” against the Opposition MPs.

The government’s delegation of eight ministers met Naidu after his meeting with a group of Opposition leaders.

On the Opposition’s claim that the passage and timing of the bill to privatise general insurance companies was in violation of norms, the government denied it.

The government delegation told Naidu that the passage of the bill on Wednesday was “preceded by discussions with leaders of some Opposition parties and was in pursuance of an earlier understanding that the House would sit beyond the scheduled hours, if required, to complete the business of the day”.

Asked about NCP chief Sharad Pawar’s statement that in his 55 years of parliamentary career he had never seen women MPs being attacked, Goyal said the veteran leader had been misinformed.

“Mr Pawar has been wrongly informed,” Goyal said and asked how the veteran leader could “condone” the misconduct of his Opposition colleagues.