Nearly 4,000 Pandits are working in different departments in the Valley 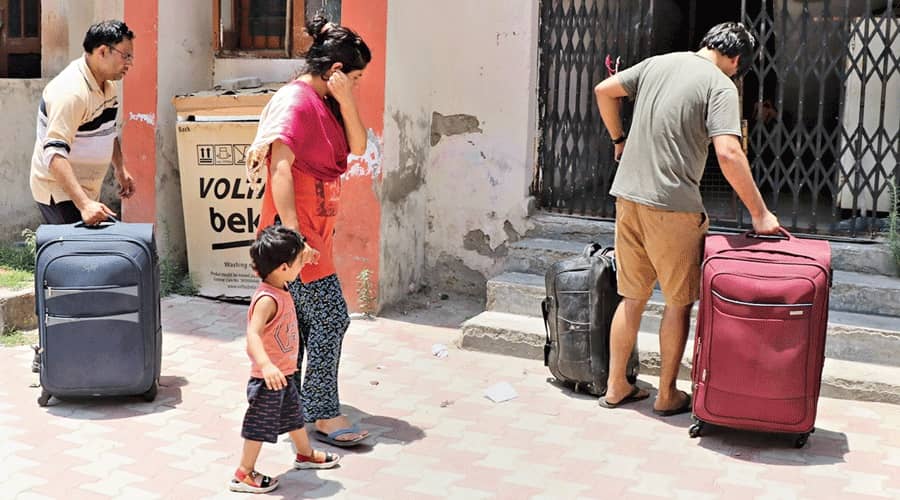 Hundreds of migrant Kashmiri pandit employees on Saturday staged another demonstration here urging Lieutenant Governor Manoj Singh-led administration to accept their demand to relocate them outside of Valley.

The protesters assembled under the banner of 'All Migrant Employees Association Kashmir' outside the Jammu Press Club and said that they reject the government's proposal to relocate pandits in safe zones within the valley.

Nearly 4,000 Kashmiri Pandits are working in different departments in the Valley after they were selected under the Prime Minister's employment package announced in 2008. However, several of them have returned to Jammu following the killing of their colleague Rahul Bhat, who was shot dead inside his office in Budgam district of Central Kashmir on May 12.

"The Kashmiri pandit employees have been on protest for the past over 40 days over their legitimate demand of relocation due to the most horrifying and life threatening conditions in Kashmir, one of the protesters, A K Bhat, told reporters.

He asked the government to accept the demand of the protesters without any further delay.

"The Pandit employees are only meant to serve in Kashmir is a wrong notion created by certain people in the administration. There are other districts in Jammu where there is also a need and they can work far better there in the interest of the society, he said.

Bhat saluted the "peaceful" way of protest and said, "We will not budge till our genuine demand of relocation is accepted."

Shushant, another pandit employee, said that there was no assurance from the government till date.

"We have a lot of expectations from this government and are optimistic that it will accept our demand sooner than later," he said.

Abhinav termed their protest successful and thanked the people from all walks of life for their "moral support".

"We have put our demand before the government and will continue our protests in both Kashmir and Jammu divisions," he said.