Malda train on ‘unused’ tracks derails in UP 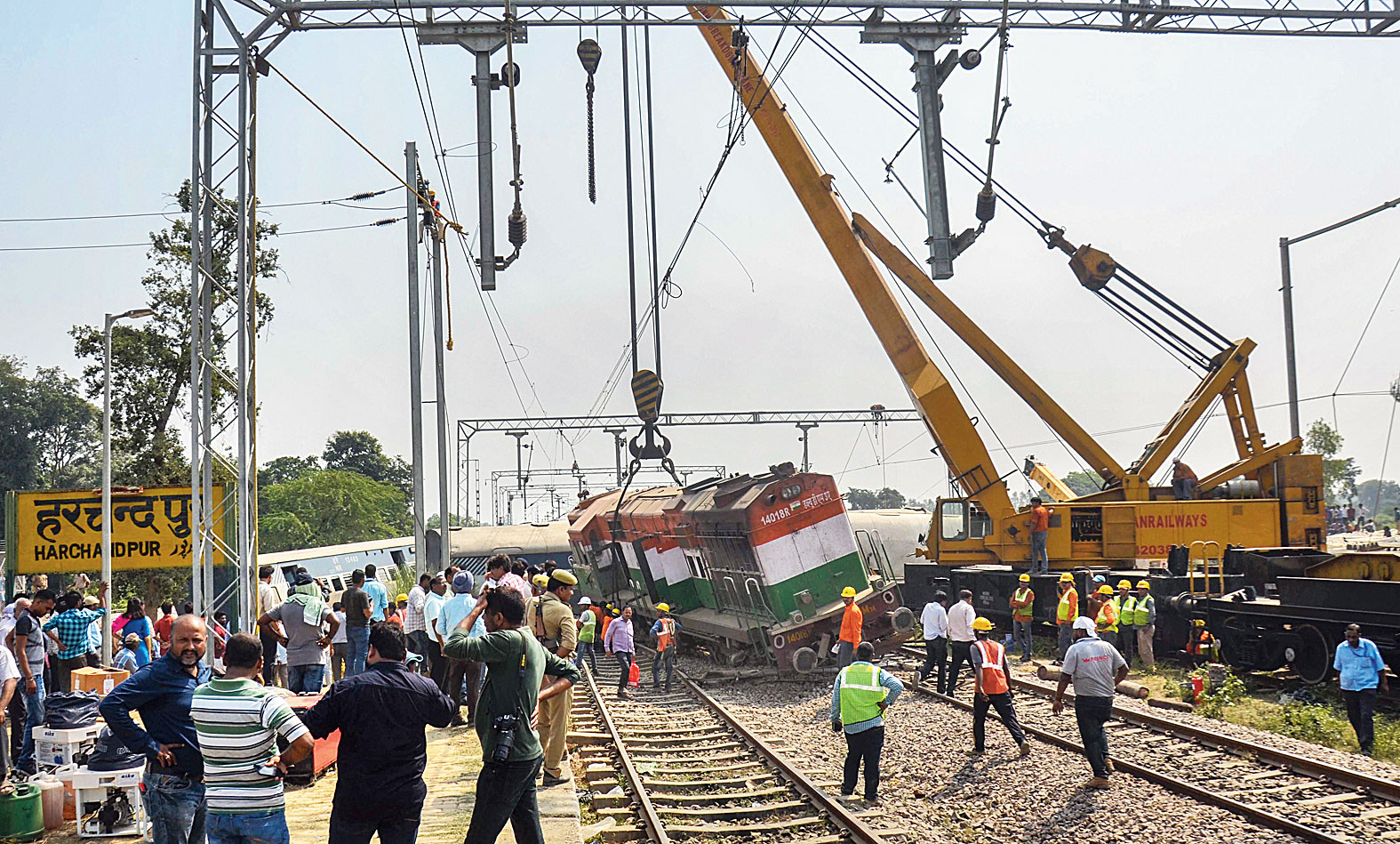 The engine and six bogies of a train from Malda derailed after leaving Rae Bareli station in Uttar Pradesh on Wednesday morning, killing seven persons and pointing the needle of suspicion at a last-minute signal to divert to tracks that had not been in use for several months.

The 6.11am tragedy involving the Malda Town-New Delhi New Farakka Express, in which two children were among the dead, occurred a day after railway minister Piyush Goyal had patted his ministry for its work to eradicate unmanned crossings.

Sources in the railways and residents pointed to signal failure as the possible reason for the track diversion, although the department has not announced an official reason for the accident.

The train had left Rae Bareli around 5.50am, more than two hours behind schedule, and was 100 metres from Harchandpur station when the engine and the bogies derailed. The train was not supposed to stop at the station.

O.P. Singh, the Uttar Pradesh director-general of police, rejected the possibility of sabotage, but said the police’s anti-terrorist squad was at the spot and probing every possible aspect.

According to Uttar Pradesh ADG (law and order) Anant Kumar, the reason for the derailment will be known after the squad finishes its probe.

Five of the deceased were from Bihar.

“The train had been diverted to a pair of tracks that has not been in use for many months,” said a resident of Harchandpur who was among the first to start rescuing passengers as the police and the local administration allegedly reached the spot after an hour.

National Disaster Response Force personnel reached the area from Lucknow, 90km away, at 8.30am.

“There was a problem with the signal. We need to find out whether it was a sudden snag or something that was ignored by those who were supposed to manage traffic. The tracks were changed for unknown reasons. The driver realised that something was wrong and applied the emergency breaks, which caused the derailment,” a railway official told this newspaper in Lucknow on condition of anonymity.

The railways have suspended Ashish Kumar, the assistant station master of Harchandpur, for dereliction of duty.

Rasik Lal Majhi of Laxmipur village in Bihar’s Munger district, whose son Dinesh, 4, died in the accident, told reporters at Rae Bareli district hospital that the general carriage in which he was travelling suddenly jumped in the air and fell a few metres from the tracks.

His relative Mohan Majhi of Kharagpur town in Munger has lost his wife Sunita, 45, son Shambhu, 20, and daughter Rita, 4. Ajay Puri, 45, from Kishanganj was also among the dead. Mohan, along with his son Ravi, 6, are admitted to the district hospital. Rasik Lal and Mohan are labourers who were travelling to Delhi, and from there to Punjab in search of work.

The identities of three others are yet to be ascertained as the deceased were travelling in the general compartment, where no reservation is required.

Around 35 people have received treatment at hospitals for minor injuries.

Four of the seriously injured are being treated at the trauma centre of Lucknow’s King George Medical University and two at the city’s Sanjay Gandhi Postgraduate Institute of Medical Sciences.

Railway officials said trains would be allowed on the route in a day as the engine, three general compartments and three sleeper bogies of the New Farakka Express were being removed.

Food arrangements were made for the train’s stranded passengers, who were taken in buses to Lucknow to facilitate their onward journey. A special train has been arranged to ferry them to New Delhi from Lucknow.

Uttar Pradesh chief minister Yogi Adityanath has announced an ex gratia payment of Rs 2 lakh to the kin of each of those killed and Rs 50,000 to each of those injured.

Railway minister Goyal tweeted from his personal handle to announce a compensation of Rs 5 lakh to the family of each of those killed, Rs 1 lakh to each of those seriously injured and Rs 50,000 to those admitted to hospitals with minor injuries.

On Tuesday the railway minister had tweeted about “record work by Indian Railways to shut crossing of death”.

“The Govt. has once again demonstrated that there can be no compromise when it comes to the safety of travellers. With this belief, the Railways have eliminated 3,005 unmanned level crossings this year, while the remaining 474 minor crossings will also be eliminated soon,” Goyal had written.

Congress leader Sonia Gandhi, the Rae Bareli MP, was in Allahabad, 150km away, on Wednesday to attend a meeting of the Kamla Nehru Memorial Trust and inaugurate a cancer ward of the hospital. She expressed grief at the accident.

The Prime Minister’s Office tweeted: “Condolences to the bereaved families and I pray that the injured recover quickly.”