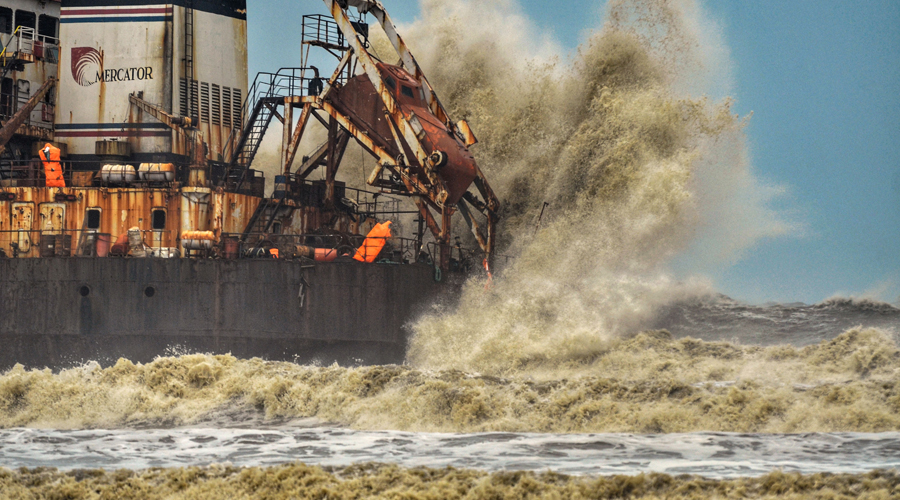 A low-pressure system in the Bay of Bengal has intensified into a cyclonic storm 'Jawad', the India Meteorological Department said on Friday.

The cyclonic storm is likely to reach the west-central Bay of Bengal off the coast of north Andhra Pradesh and Odisha by Saturday morning, the IMD said.

It will then move north-northeastward along the coast of Odisha and adjoining Andhra Pradesh and touch the coast around Puri by December 5 noon, according to the weather department.

The low-pressure area had developed over the Andaman Sea on Nov 30.

The name of the cyclone -- 'Jawad' -- has been proposed by Saudi Arabia.

The National Disaster Response Force (NDRF) has earmarked a total of 64 teams to tackle the situation arising out of the impending cyclonic storm 'Jawad' that is expected to affect the states of Odisha, Andhra Pradesh and West Bengal this weekend, a senior officer said on Friday.

NDRF Director General (DG) Atul Karwal told reporters during an official briefing here that while 46 teams have been deployed or pre-positioned in the vulnerable states, 18 teams have been kept in reserve.

According to the deployment map shared by the DG during the press conference, out of the 46 teams, 19 are based in West Bengal, 17 in Odisha, 19 in Andhra Pradesh apart from seven in Tamil Nadu and two in Andaman and Nicobar Islands.

All teams have been made available as desired by the various state governments and they will be deployed in consultation with local authorities, the NDRF DG said.

A single NDRF team has about 30 personnel who are equipped with pole cutters, electric saws to clear uprooted trees, inflatable boats and some other relief and rescue gadgets.

"We are confident of taking care of the situation in the best possible manner," Karwal said.

He said all preparations have been done by the federal contingency force to help the affected states and the citizens.

The DG said 'Jawad' has been categorised as a 'severe cyclone' where the wind speeds range between 100-110 kmph and it is expected that it would not scale up and take shape of a higher category of cyclonic strom.

He said the force was in touch with the integrated defence staff (IDS) for quick airlift of additional NDRF teams to the affected states.

The NDRF head said the national crisis management committee (NCMC) chaired by the cabinet secretary, another panel headed by Prime Minister Narendra Modi and other senior officers have already reviewed the situation and these will continue till the cyclone hits the coast on December 5 in Odisha.