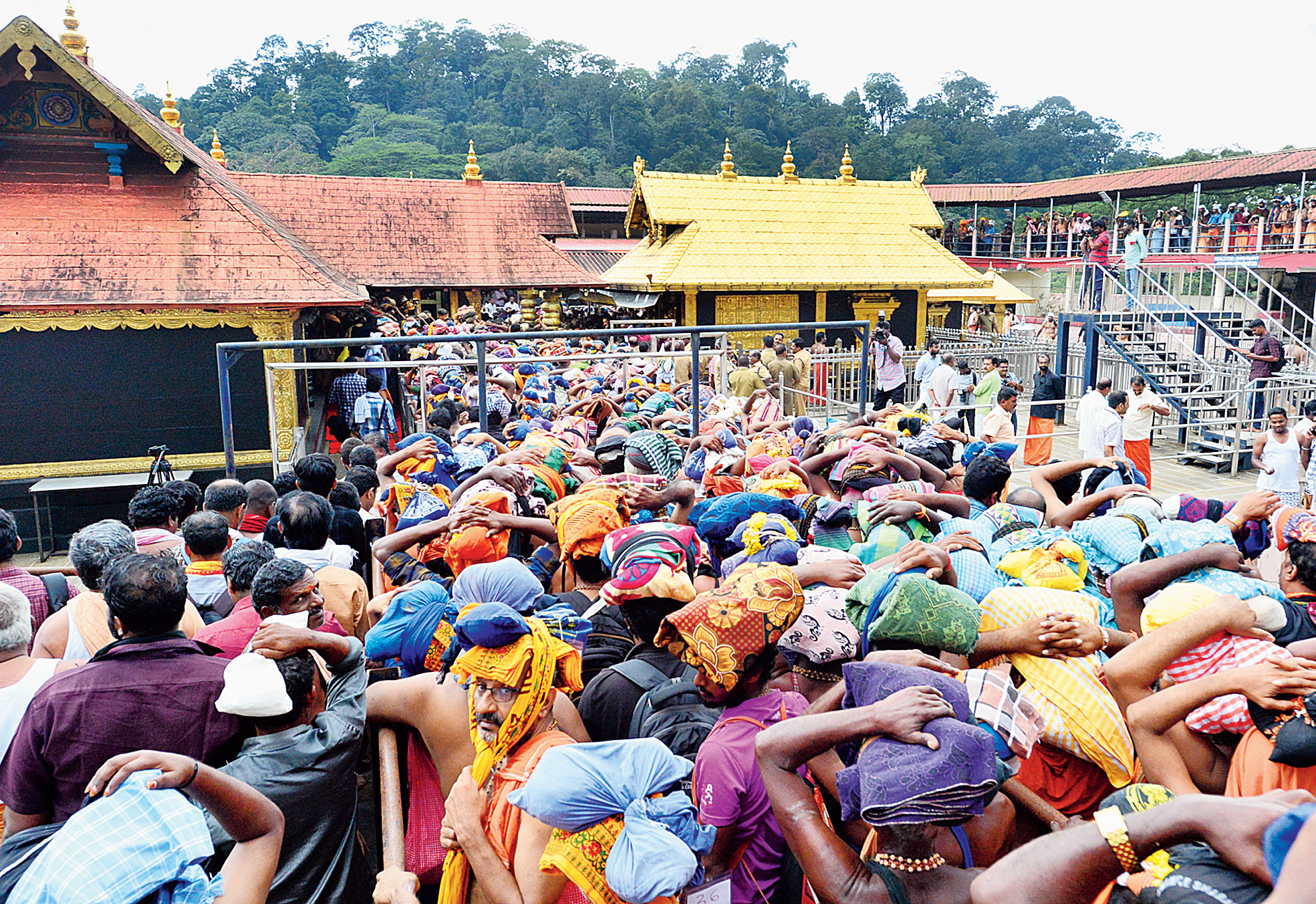 Devotees head to the sanctum sanctorum of the Sabarimala temple during a peak season
Agencies
Our Legal Correspondent   |   New Delhi   |   Published 28.09.18, 11:17 PM

The lone dissenting judge in the Sabarimala temple case has held that court interference with religious practices, unless they are social evils like Sati, could “cause serious damage to the constitutional and secular fabric of this country”.

The Supreme Court on Friday quashed by a 4:1 verdict the centuries-old ban on women in the “menstrual age” (10 to 50 years) entering the Kerala temple, terming the practice “unconstitutional” and a form of “untouchability”.

But Justice Indu Malhotra, in her dissenting judgment, underlined that no aggrieved devotee of Lord Ayyappa had approached the court against the practice. Rather, a public interest plea had been filed by people who did not claim to be devotees of Lord Ayyappa.

“In matters of religion and religious practices, Article 14 (equality) can be invoked only by persons who are similarly situated, that is, persons belonging to the same faith, creed, or sect,” Justice Malhotra said.

She added: “The right to practice one’s religion is a fundamental right guaranteed by Part III of the Constitution, without reference to whether religion or the religious practices are rational or not.”

Sabarimala devotees to tap all religions for support

Justice Malhotra argued that in a pluralist society of people with diverse faiths, beliefs and traditions, entertaining public interest petitions that challenge religious practices followed by any group could hurt the country’s constitutional and secular fabric.

“Religious customs and practices cannot be solely tested on the touchstone of Article 14 and the principles of rationality embedded therein. Article 25 specifically provides the equal entitlement of every individual to freely practice their religion,” she said.

“Equal treatment under Article 25 is conditioned by the essential beliefs and practices of any religion. Equality in matters of religion must be viewed in the context of the worshippers of the same faith.

“The right to equality claimed by the petitioners under Article 14 conflicts with the rights of the worshippers of this shrine, which is also a fundamental right guaranteed by Articles 25 and 26 of the Constitution.

“It would compel the court to undertake judicial review under Article 14 to delineate the rationality of the religious beliefs or practices, which would be outside the ken of the courts. It is not for the courts to determine which of these practices of a faith are to be struck down, except if they are pernicious, oppressive, or a social evil, like Sati.”

Justice Malhotra added: “The petitioners do not state that they are devotees of Lord Ayyappa who are aggrieved by the practices followed in the Sabarimala temple. The right to equality under Article 14 in matters of religion and religious beliefs has to be viewed differently. It has to be adjudged amongst the worshippers a particular religion or shrine, who are aggrieved by certain practices which are found to be oppressive or pernicious.

“In the present case, the worshippers of this temple believe in the manifestation of the deity as a ‘Naishtik Brahmachari’ (eternal celibate). The devotees of this temple have not challenged the practices followed by this temple, based on the essential characteristics of the deity.”

Justice Malhotra said that Hindu deities had both physical/temporal and philosophical form.

“The same deity is capable of having different physical and spiritual forms or manifestations. Worship of each of these forms is unique, and not all forms are worshipped by all persons,” she said.

“The form of the deity in any temple is of paramount importance. For instance, Lord Krishna in the temple at Nathdwara is in the form of a child.”