Cops remove many of the posters from areas such as C.V. Raman Road near Mekhri Circle, just a short drive from CM's residence 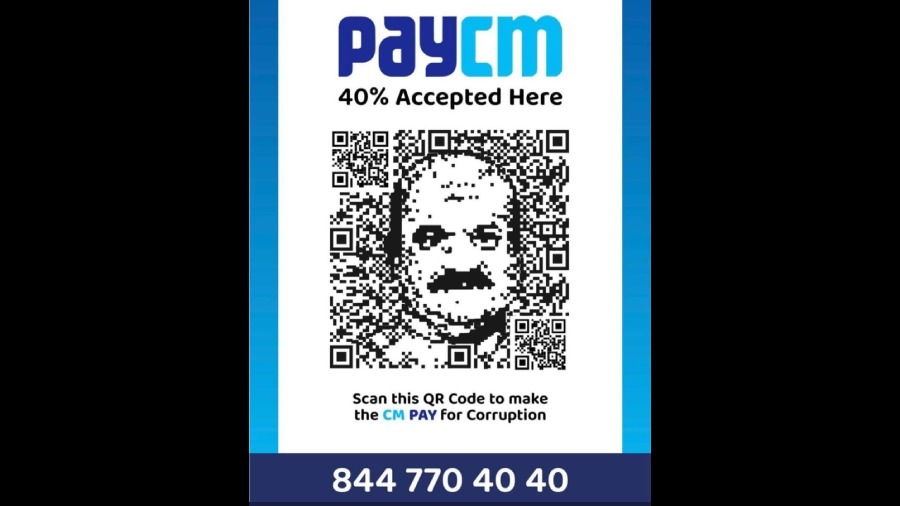 The Congress has put up “paycm” posters across Bangalore with chief minister Basavaraj Bommai’s face embedded in a QR code that would take one to the web portal the Opposition party has launched to “expose the BJP’s corruption”.

The name is a play on the digital payments app paytm and the posters have replicated the trademark blue colour and design pattern of the company. They also have the catchline “40% Accepted Here”, an allusion to allegations of kickbacks being demanded by functionaries of the BJP government to clear project bills.

Scanning the QR code on the “paycm” posters would take one to the website 40percentsarkara.com that the Congress launched last week for people to air their grievances about corruption in Karnataka. Close to 1.2 lakh “voices” have been “raised”, or complaints registered, on the website so far.

A policeman and an official remove “paycm” posters put up by the Congress in Bangalore on Wednesday. The posters have chief minister Basavaraj Bommai’s face embedded in a QR code linked to a web portal the Opposition party has launched to “expose the BJP’s corruption”
PTI

Police removed many of the posters from areas such as C.V. Raman Road near Mekhri Circle, just a short drive from the chief minister’s residence.

Congress MLA Priyank Kharge told reporters that while the government can remove the posters, it must explain the allegations. “They can tear the posters, hack our website and Twitter handles and even issue summons. But tell us when they’re going to explain to the people about this rate card,” he said, referring to widespread allegations about the government fixing bribe rates for transfers, postings and contracts.

Janata Dal Secular leader and former chief minister H.D. Kumaraswamy said farmers too were complaining about being forced to pay bribes. “Even farmers are saying how much they are forced to bribe to get what is due to them,” he alleged.

The BJP government had earned the moniker “40 per cent sarkara” after civil contractors alleged they were being asked for 40 per cent kickbacks to clear their pending bills for works undertaken. A civil contractor, Santosh Patil, ended his life in April this year after sending WhatsApp messages to his friends accusing minister K.S. Eshwarappa of demanding a 40 per cent commission to clear a Rs 4-crore bill due for road works undertaken by him.

The subsequent uproar had forced Eshwarappa to resign from the cabinet. But a police inquiry later gave him a clean chit in the case.

Chief minister Bommai said on Wednesday that an investigation had been ordered into the poster campaign. “This is an attempt to tarnish the image of Karnataka and my name. Everyone knows how to launch baseless campaigns like this one. But my issue is that this is an attempt to spoil the name of the state and suitable action will follow against that.”

New Delhi: The Election Commission of India on Wednesday asked the YSR Congress Party to publicly announce that Andhra Pradesh chief minister Y.S. Jagan Mohan Reddy was not the party president for life.

On July 9, the party had amended its constitution and re-elected Jagan as the party president for life. This goes against the EC guidelines for registration of political parties, which stipulate a limit of five years for office-bearers.

The EC said in its order that after three reminders, the party’s reply on August 23 “did not categorically admit or deny the specific allegation as forwarded in Election Commission of India’s reference of 19.07.2002 regarding Shri Jagan Mohan Reddy being made permanent President for life…”