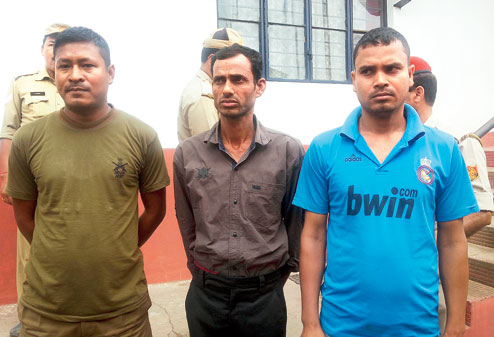 Jorhat, May 2: Eight persons, including three serving staff of Kaziranga National Park, were arrested for their alleged involvement in rhino poaching on a day the carcass of another rhino, killed by poachers last night for its horn, was recovered today.

The rhino, which had strayed out of the park, was killed by poachers at Biswanath Korotigaon Sapori in Biswanath Chariali district on the north bank of the Brahmaputra, where the park has its sixth addition. The carcass, shorn of its horn, was recovered today. This is the eighth rhino to be poached in the park this year.

In the other incident, Dispur has asked the forest department to initiate departmental action against the accused who were arrested today and has also ordered a probe to be conducted by senior forest officials into a possible nexus between Kaziranga staff and poachers.

Divisional forest officer of Kaziranga, Suvasish Das, told The Telegraph over phone from Bokakhat that three serving staff under Buraphar range - homeguards Pintu Das and Tonkeshwar Bordoloi and grasscutter Keshab Gayan, and a former casual worker, Kuddus Ali, who used to serve in the same range - have been arrested by Jakhalabandha police of Nagaon district on charges of covering up the killing of a rhino under Tunikuti forest camp of Burapahar range in November last year.

The four allegedly did not report the killing of the rhino and buried the carcass, whose horn had been taken away by the criminals.

Das said park and police personnel recovered the carcass today after digging up the site following information provided by the accused. He said the park authorities had provided some inputs about poaching to the police, based on which the latter picked some persons whose interrogation led them to the accused.

The DFO said further investigations would unveil the exact nature of the alleged involvement of the accused, who have denied the charges and claimed that they "hid" the carcass fearing "strong action" by the government which was under fire from all quarters over the matter.

Das said he was awaiting an official report of the police on the arrests and after receiving it, he would issue suspension orders for the three employees.

"Our government has been following a tough policy to curb rhino poaching and no one will be spared.I have asked additional principal chief conservator of forests J.M. Kouli to carry out an inquiry to find out possible nexus of park personnel with poachers," Munda said.

Appreciating the efforts of the 1,200 men guarding Kaziranga, which is spread over 800 square km on both banks of the Brahmaputra, Munda said the number of rhinos killed had come down to 17 last year from 27 in 2014.

He said one poacher has been killed this year and over 20 arrested while 23 poachers were killed last year and 88 arrested. A large number of arms and ammunition have also been seized.

The last incident of rhino killing took place in the park on April 13 night, just after the Duke and Duchess of Cambridge, Prince William and his wife Kate Middleton, visited Kaziranga.