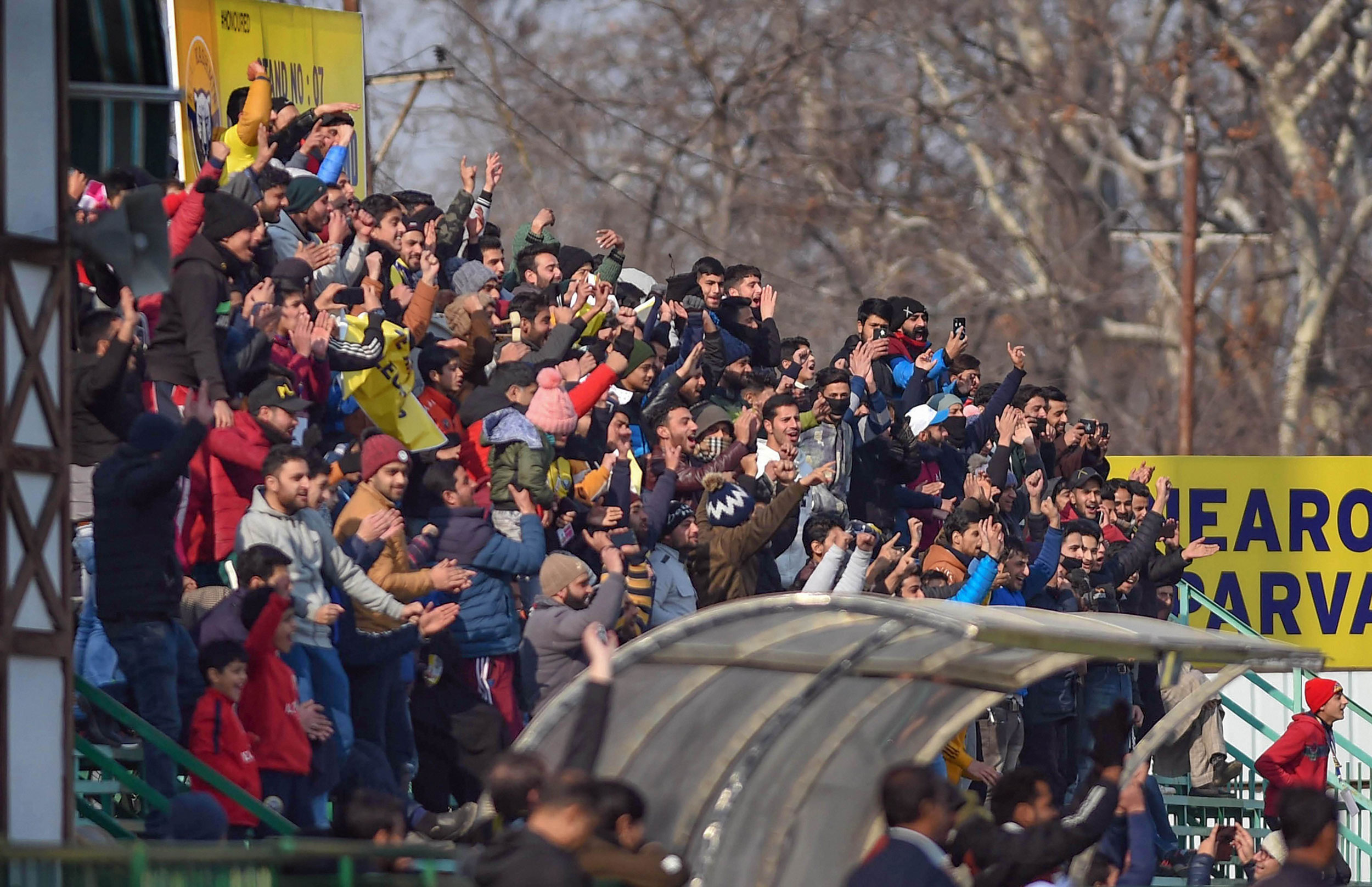 The Valley on Thursday hosted its first major sporting event since August 5 but politics too appeared to be as much at play after the central government’s repeated failures to break the ice on the ground.

Among those who turned up for the football match between local team Real Kashmir FC and Chennai City FC was a surprise visitor — BJP national general secretary Ram Madhav.

Madhav had flown all the way from Delhi to watch the I-League match.

Lieutenant-governor G.C. Murmu’s adviser Farooq Khan was present too but it was Madhav who seemed to be clearly the boss, receiving a rousing reception from the organisers and later felicitating some former football players from the Valley.

“Kashmiris love football, we support them and the Real Kashmir team. It is a very big reason for me to be here,” Madhav told reporters.

The BJP leader offered all support to the sport in the Valley.

Thursday’s game was the first sports-related programme in the Valley since August 5 when the central government moved to scrap Jammu and Kashmir’s special status under Article 370 of the Constitution and redraw its map.

The state has since been split into two Union Territories.

The Centre had been finding it hard to reach out to Kashmiris since then despite repeated attempts. In November, thousands of senior officials of government departments had visited villages as part of a drive to connect but few local people turned up to participate in the exercise.

Earlier, in August, national security adviser Ajit Doval had camped in the Valley and visited several districts across Kashmir to meet common people but only a handful came out of their homes to meet him.

Where politics failed, sport seems to have provided a face-saver.

Hundreds turned up at Srinagar’s city centre to watch the I-League match, the heavy security around Srinagar’s TRC grounds — the venue — ensuring the event passed off peacefully.

For the record, Real Kashmir won 2-1, their first victory in the ongoing I-League season. Local player Danish Farooq and Ivorian Bazie Armand scored for the hosts before Syed Suhail Pasha pulled one back for the visitors.

“There was great response. People cheered for both the sides and enjoyed the match,” he said.

A Real Kashmir fan said people were surprised to see Madhav but none objected. “Not that we approved of his presence. We wanted to enjoy the match and were delighted to see our team win,” said the boy from Srinagar’s old city.

Madhav told reporters he was delighted “to see the excellent performance of our Real Kashmir team”.

“I was witness to two goals; both were scored by the Real Kashmir team. They have a very good chance of winning the cup and I wish them success,” Madhav, who left after the interval, said.

Madhav also said all the measures now in force in Kashmir were temporary and things would change once the situation improved fully.

No political gatherings are still allowed in Kashmir while the ban on Internet services continues. Most of the top leaders in the Valley are in jail.

Real Kashmir had played two drawn matches before Thursday’s clash, both outside Jammu and Kashmir.

With this win, the team moved to seventh place with five points, with Chennai City behind them at eighth.

“It was a splendid win and we did it for Kashmir,” the team’s co-owner, Sandeep Chatoo, said. “The coach and the team ensured that every Kashmiri returned home with a smile on their face.”