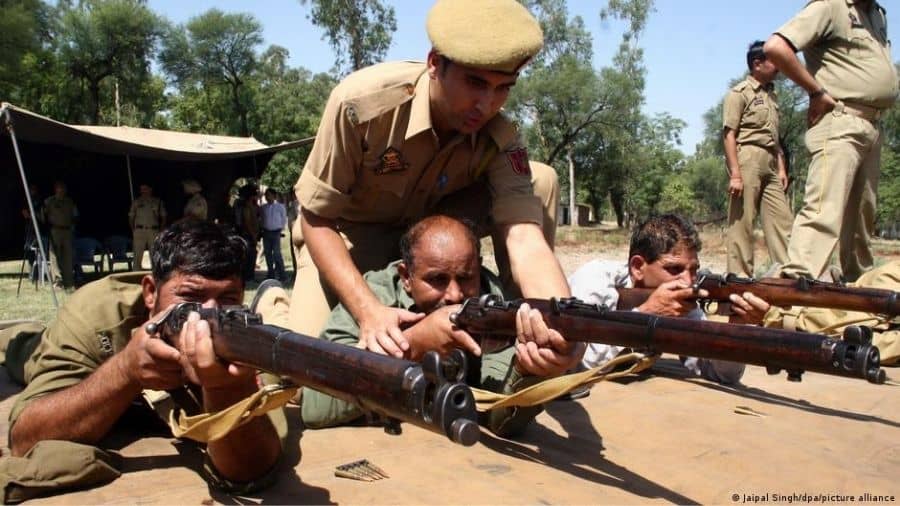 India is providing better pay and more training to armed local groups in the restive Kashmir region. However, their members are accused of carrying out unwarranted killings.

The decision has alarmed locals, some of whom say they were victims of violence at the hands of VDC members.

Salma Chowdhary is a mother of two and says her husband was killed by a VDC member in Kashmir's Rajouri district. Chowdhary and her children now live with her mother.

In 2015, Chowdhary's husband, Ishtiyaq Ahmad, went to a government-run shop to check on reports that vendors were illegally selling subsidized rations meant for poor families on the black market. Ahmad had been a youth leader of the then-opposition party National Conference.

When he approached one of the vendors accused of selling goods on the black market, the man told Ahmad to back off. The man, who was a member of the VDC, kept a rifle inside the shop. When Ahmad persisted, the man shot him dead.

In another incident a week later, a VDC member shot and killed a woman and her four-year-old son in Rajouri district.

The deaths triggered protests across India-administered Kashmir, with opposition parties demanding that the VDCs be disbanded.

Although the VDCs were not officially disbanded, the meager monthly salaries of their members were withheld, and many surrendered their weapons.

However, on March 3, India's Home Ministry said the VDC program would be restarted, with an increased monthly salary.

"I was shocked when I read that the government re-established the VDCs. They take up arms to harass and kill people," Chowdhary said.

VDCs accused of operating with impunity

In 1995, the VDCs were set up by New Delhi by arming volunteers, mostly Hindus, to fight militancy in Jammu and Kashmir. Initially, there were around 5,000 VDC members but over the years their number grew to over 27,000.

Since then, VDCs have come under sharp criticism for committing human rights violations in remote areas of Jammu and Kashmir.

However, the conviction rate in the cases against VDCs is low, with only six cases having so far led to a conviction. Seven years after her husband's murder, Chowdhary says the case is still pending.

Zahid Choudhary, a youth leader in Jammu district, told DW the VDCs "assert the right to control and punish anyone they deem to be a suspect."

He added the VDCs are increasingly found to be using their weapons to settle personal disputes.

"It seems clear that New Delhi wants to arm a particular community in the name of fighting militancy, which doesn't exist in the Jammu region. Instead of reviving this armed militia, the government should disband them," he said.

Local Bharatiya Janata Party (BJP) leader Sunil Sharma backs the revival of the VDCs, saying their members have given their lives to fight militants he claims are supported by Pakistan.

For the past few months, the Indian Army has conducted multiple training workshops with the VDCs after a drone attack on an air force station in Jammu district.

Indian Army spokesperson Lt. Col. Devender Anand told DW that the VDCs are an important component of the security setup in the region.

Every month, there will be a training workshop somewhere along the Line of Control with Pakistan, where VDCs are trained in weapons' handling and drone warfare. Coordination with regular army forces will also be improved to remove delays in the case of militant activities.

"The VDCs counter the militants at initial stages," he said.

However, activists in the region say arming a civilian force is both unnecessary and illegal.

Human rights activist Sabia Dar questioned why Jammu and Kashmir needs 27,000 VDC members, when there are already 500,000 regular Indian Army troops and other forces already stationed in the region.

"It is the privatization of human rights violations," Dar told DW.

"We serve as a security arch to defend remote and hilly villages against militant attacks in the region. There will be some black sheep in the VDCs like in other forces but that doesn't mean you have to disband them," he said.