Kanwar yatra cancelled by Kanwar Sanghs on appeal of UP government

The Uttarakhand govt earlier this week cancelled the annual ritual 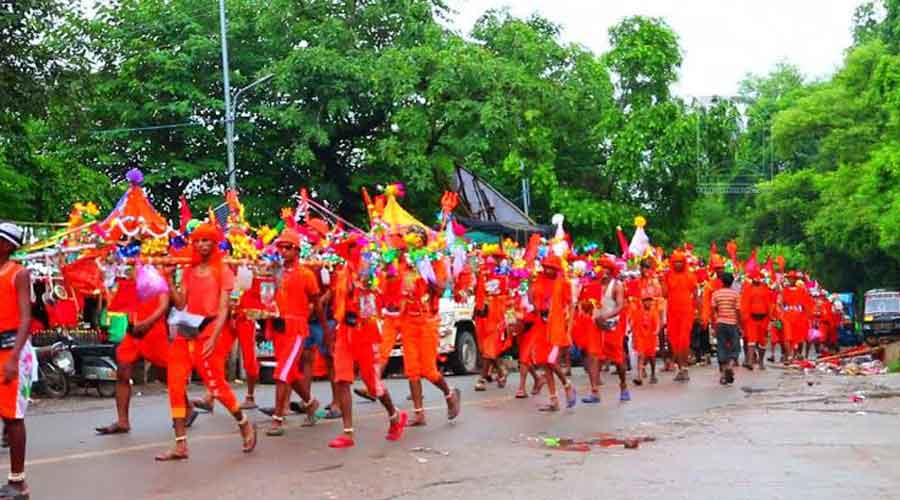 The yatra goes on till the first week of August and sees thousands of Shiva devotees called kanwariyas' travelling mostly on foot from neighbouring states, including Uttar Pradesh, Haryana and Delhi to collect water from the Ganges in Haridwar.
Twitter
Our Bureau, PTI   |   Lucknow   |   Published 17.07.21, 10:43 PM

The annual Kanwar Yatra in Uttar Pradesh has been cancelled this year, a senior government official said here on Saturday night.

The development came a day after the Supreme Court said it cannot allow the Uttar Pradesh government "to hold 100 per cent physical Kanwar Yatra in view of Covid", stressing that sentiments, including religious, are subservient to the Right to Life.

"The Kanwar Yatra has been cancelled by the Kanwar Sanghs on the appeal of the Uttar Pradesh government," Additional Chief Secretary Information Navneet Sehgal said on Sunday.

The yatra was scheduled to start on July 25.

The Uttarakhand government has already called off the Kanwar Yatra citing fears expressed by experts of a possible third wave of the pandemic and the risk posed by such gatherings.

The yatra goes on till the first week of August and sees thousands of Shiva devotees called kanwariyas' travelling mostly on foot from neighbouring states, including Uttar Pradesh, Haryana and Delhi to collect water from the Ganges in Haridwar.

The Centre had told the top court that the state governments must not permit any kind of Kanwar yatra because of the pandemic and arrangements should be made for water from the Ganges to be available through tankers at designated places.

On Friday, the Supreme Court which had taken suo motu cognisance of the matter and asked the Uttar Pradesh government to inform by July 19 whether it would reconsider its decision to hold a "symbolic" Kanwar Yatra.

Hours after a nudge from the Supreme Court on Friday, the Uttar Pradesh government had said it is talking with "kanwar sanghs" to take the right decision on the annual yatra and reminded that the organisations themselves decided to cancel it last year.

In a statement, the UP government had said that it was preparing itself for every situation for the Kanwar Yatra, scheduled to start from July 25.

"Officers have been asked to talk to 'kanwar sanghs' so that a right decision could be taken. The officers are also apprising them of the Covid situation.

"The government feels that religious sentiments should not be hurt and also there should be the safety of people. Last year, 'kanwar sanghs' after talks with the government themselves decided to cancel the yatra," it had said.

A Supreme Court bench of Justices R F Nariman and B R Gavai had said the Right to Life under Article 21 of the Constitution is paramount and asked the Uttar Pradesh government whether it was willing to reconsider its decision to hold a yatra at all.

"We are of the view that this is a matter which concerns every one of us as citizens of India and goes to the very heart of Article 21 of the Constitution of India, which has a pride of place in the fundamental rights chapter of our Constitution.

"The health of the citizenry of India and their right to life are paramount. All other sentiments, albeit religious, are subservient to this most basic fundamental right," the bench had said.