Kanhaiya Kumar was his usual puckish self at a Lucknow literary fest on Friday, shooting barbs at powerful government leaders despite an anxious 25 minutes earlier when Sangh affiliates had barged in to protest his presence. 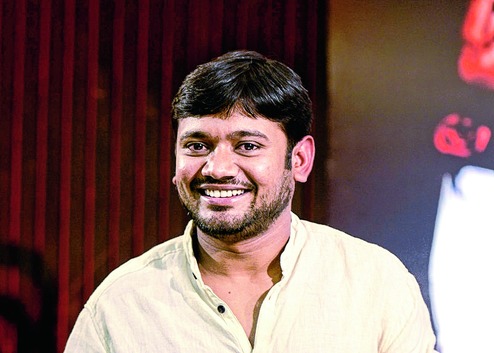 Lucknow: Kanhaiya Kumar was his usual puckish self at a Lucknow literary fest on Friday, shooting barbs at powerful government leaders despite an anxious 25 minutes earlier when Sangh affiliates had barged in to protest his presence.

Asked about his wedding plans, the former JNU students' union president and trenchant BJP critic took a jibe at Prime Minister Narendra Modi: "I will not hide my marriage from anyone like our PM if I tie the knot."

Modi had left Jashodaben, now a retired schoolteacher, soon after their marriage in 1968. He is believed to have officially acknowledged her as his wife for the first time in 2014, when he filed his affidavit before the Election Commission before the general election.

Citing how some of the protesters had been taking selfies while chanting slogans against him, Kanhaiya said: "The Prime Minister converts every programme into a selfie-taking platform. Please don't do the same thing with this literary festival."

He continued teasing the BJP, saying: "Ram had left his father's kingdom to live as an ascetic in a forest but the chief minister of Uttar Pradesh has discarded an ascetic's life to become a ruler."

Kanhaiya wasn't done with Ramayan parallels. "Some people are accusing me of lighting a fire. But this means I'm doing what Bajrangbali (Hanuman, who set Lanka on fire) did. Why is the Bajrang Dal opposing me, then?" the PhD student in African Studies said.

Kanhaiya, arrested on sedition charges last year, later read out from his book, From Bihar to Tihar. Kanhaiya belongs to Begusarai in Bihar, and has been associated with the CPI.

"I'm not anti-national; my ancestors were freedom fighters," he said during his half-hour address after the police had removed the mob.

"I'm not one to run away. You are free to shoot me, but what I expected from you was to ask me the most pinching and uncomfortable questions. I'm ready to answer them."

He added: "Instead of protesting against me, you (the protesters) should ask your own party's home minister (Rajnath Singh) why there's a delay in filing a chargesheet against me, why the government has provided me with security if I am anti-national."