It could not be resumed until this morning due to shooting of stones from the hillock, heavy rains and strong winds 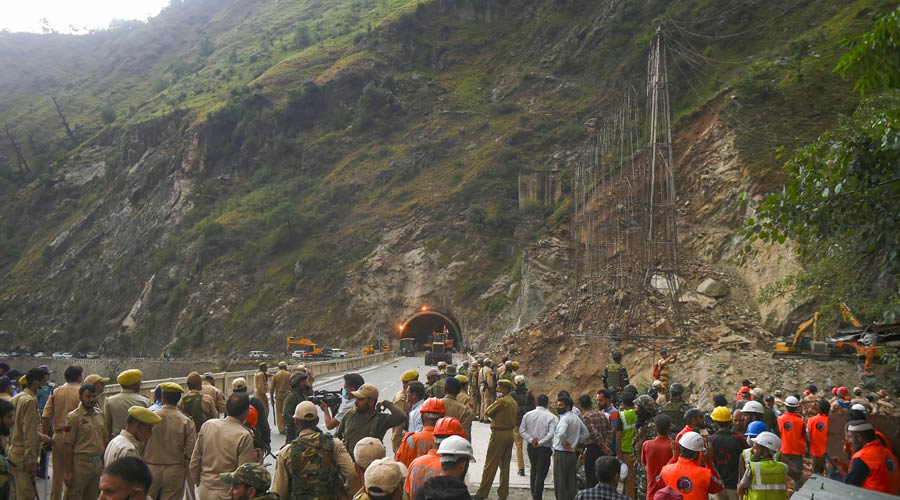 Rescue operation halted due to a landslide, after a portion of an under-construction tunnel on the Jammu-Srinagar national highway collapsed near Magarkote in Ramban district, Friday, May 20, 2022. The incident took place on Thursday night.
PTI Photo
Our Bureau, PTI   |   Banihal/Jammu   |   Published 21.05.22, 10:07 AM

The operation to rescue nine labourers feared trapped under the debris following the collapse of an under-construction tunnel on the Jammu-Srinagar national highway resumed early on Saturday after a fresh landslide forced the authorities to suspend the process last evening, officials said.

Their chances of survival are, however, bleak, they said.

A labourer was killed and three others rescued when the audit tunnel of T3 on the highway near Khooni Nallah In Jammu and Kashmir's Ramban district caved in at the start of the work around 10.15 pm on Thursday.

The officials identified the deceased labourer as Sudhir Roy (31), a native of West Bengal.

On Friday evening, over 15 rescuers, including the Station House Officer of Ramsu police station, Nayeem-Ul-Haq, had a narrow escape during the fresh landslide, prompting the authorities to suspend the rescue operation. It could not be resumed until this morning due to shooting of stones from the hillock, heavy rains and strong winds, officials said.

With the improvement in the weather condition, the rescue operation resumed with the first light of the day with authorities pressing three earth movers and rock-breakers to reach out to the trapped workers, they said.

Additional personnel along with magistrates have been deployed to speed up the rescue operation, they added.

All of them were employed by a company tasked with auditing the tunnel.

Earlier, Divisional Commissioner, Jammu, Ramesh Kumar and Additional Director General of Police (ADGP), Jammu, Mukesh Singh visited the incident site, while Lt Governor Manoj Sinha monitored the situation from a control room and was briefed about intermittent shooting stones, which have been obstructing the rescue operation.