Government job will be provided to the wife of slain employee 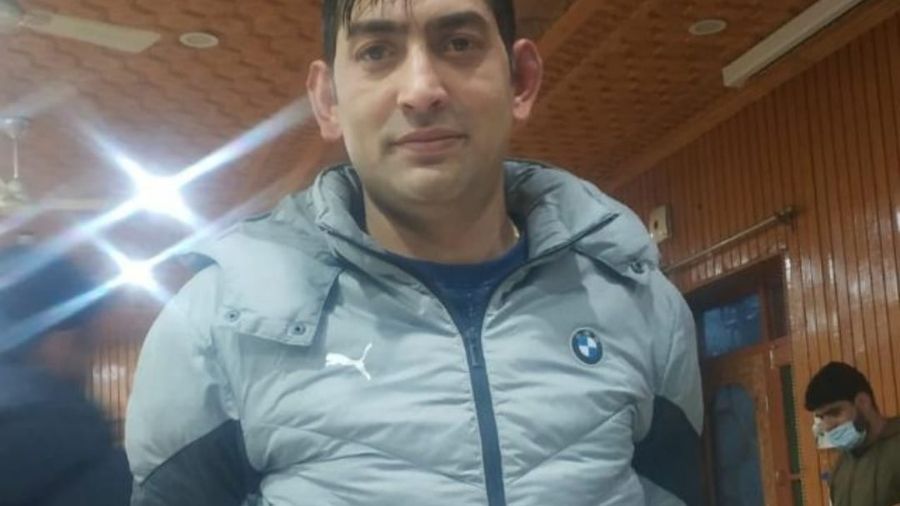 Angry Kashmiri Pandits held noisy demonstrations in several places in Jammu and Kashmir on Friday, a day after the killing of community member Rahul Bhat by Lashkar-e-Taiba terrorists in his office, and were met with force by the police which used teargas and lathi-charge to disperse them.

Raising slogans against Lt Governor Manoj Sinha and the administration, the demonstrators, mostly government employees posted in the troubled valley and their kin, demanded that they be provided adequate security or be transferred to Jammu. The employees also threatened en masse resignation from their jobs.

A rattled administration pleaded with the demonstrators to call off their protests and announced that the Lt Governor had set up an SIT to probe the killing of Bhat in the Tehsil office at Chadoora in Budgam district.

The Sheikhpora camp, located in Budgam of central Kashmir, where Bhat had been provided accommodation along with other government employees, was the epicentre of the protests with people marching towards the airport road to block it before they were intercepted by the police.

A heavy posse of police personnel stopped the protesters after appeals requesting them to disperse failed to yield any result, leading to clashes during which the security forces had to resort to lathi-charge and firing teargas shells.

There were no reports of any injury but some purported pictures of people allegedly wounded during the police action circulated on social media.

The demonstrators then staged a sit-in and raised slogans against the Jammu and Kashmir administration and demanded that Lt Governor Manoj Sinha should come and assure them about their safety. However, the Lt Governor was in Sopore attending a function at that time.

The protestors were carrying placards that read, "I need to be able to tell my children that I did not stay silent", and also displayed the wounds that they had received during the lathi charge.

They also claimed that four of their men had been detained by the police. However, there was no official confirmation for this.

Later in the evening, it was claimed by protesters that the gates of the Sheikhopora Migrant Colony were locked from the outside by police allegedly to prevent them from coming out.

The LG's office tweeted that the Lt Governor had met the relatives of Bhat and "assured justice to the family".

Bhat, 35, was shot dead by two Lashkar-e-Taiba terrorists at his Tehsil office in Chadoora of Budgam district on Thursday.

The protests were held at Baramulla, Kupwara (North Kashmir), Vessu, Mattan, Qazigund (South Kashmir), and various parts of Jammu including the Jagti camp, where Kashmiri pandit migrants have been provided concrete accommodation since 2007.

In Jammu, the funeral of Bhat witnessed unruly scenes as the BJP leaders including its J-K unit president Ravinder Raina had to face the ire of mourners. They were heckled and roughed up and police had to intervene when they visited the cremation ground in Jammu.

Hundreds of protestors blocked roads and burnt tyres at Muthi, Hazuribagh and Buntalab in Jammu. They raised slogans against Sinha and the BJP and demanded that Kashmiri Pandits be relocated from the valley.

Residents of Muthi camp led by its president Anil Bhan took out a rally and blocked a road for hours.

"The BJP is ruling this Union Territory through the LG and every failure on the part of LG is theirs. How long will we receive coffins from our homeland? Our boys and girls joined the services in Kashmir in national interest and to serve Kashmir," Bhan said.

"Home Minister Amit Shah claimed in parliament about the start of a rehabilitation plan. Since then, dozens of Hindus were killed and four temples suffered damage. Our boys and girls who are serving the people of Kashmir are in fear and terror. Is this the rehabilitation plan?" Jagti camp leader Sunil Kumar asked.

As the protests continued during the day, it was announced in the evening that the Lt Governor had set up an SIT to probe the killing of Bhat and his wife would be given a government job.

"A decision has been taken to constitute special investigative team to probe all the aspects of the despicable terror attack. The SHO of the concerned police station has also been attached," Lieutenant Governor Manoj Sinha tweeted.

He also said that the administration will bear the educational expenses of his daughter. Mainstream political parties of the union territory reacted angrily to the handling of protests with former chief minister Mehbooba Mufti appealing to the majority community to ensure that Kashmiri Pandits are safe.

She even went on to say that local religious leaders should in their Friday sermons press for the need of maintaining brotherhood in the Valley. Mufti claimed that she had been placed under house arrest to stop her from visiting Budgam to express solidarity with the protesting Kashmiri Pandits.

"Wanted to visit Budgam to express my solidarity with Kashmiri Pandits protesting against GOIs failure to protect them. Have been put under house arrest as the fact that Kashmiri Muslims and Pandits empathise with each other's pain doesn't fit into their vicious communal narrative," the PDP chief said.

Police officials, however, refused to comment on Mufti's claim. Later, in a video message, Mufti urged the majority community in the valley to stand by the minorities.

"We need to give a message to the whole country of J-K's brotherhood and its history that we are a secular state and a united people so that the government does not get a chance to defame Muslims," Mufti said. National Conference (NC) vice-president Omar Abdullah said it was shameful that legitimate and justified protests are met with a heavy-handed response.

"This is not new for the people of Kashmir because when all the administration has is a hammer every problem resembles a nail. If the LG's Govt can't protect KPs they have a right to protest," he wrote on Twitter.

"Tourism is not normalcy; it's a barometer of economic activity. Normalcy is the absence of fear, the absence of terror, the inability of militants to strike at will, the presence of democratic rule & by any yardstick you choose to use, Kashmir is far from normal today," Abdullah said.

Condemning the killing of a policeman in Pulwama on Friday, the NC leader said targeted killings were continuing unabated in the valley.

"Rahul in his office yesterday, Riyaz Ahmad Thoker, an SPO with J&K police, in his own home today. Targeted killings continue unabated. I can't condemn this killing strongly enough. May Allah grant Riyaz place in Jannat," he said.

Bhat was cremated on Friday in Jammu amid protests by members of the Kashmiri Pandit community. His wife and daughter, who were staying with him at Sheikhpora migrant colony in Budgam, accompanied the body as it arrived in Jammu from Kashmir.

His brother Sunny lit the pyre at the Buntalab cremation ground as chants of "long live Rahul Bhat" rent the air.

The community members, including Rahul Bhat's family, accused the BJP-led government at the Centre of making young Kashmiri Hindus "cannon fodder" in the name of rehabilitation of the community.

They also said the incident has shattered their dream of resettling permanently in the valley.

Security forces killed on Friday two Pakistani terrorists belonging to the Lashkar-e-Taiba who were behind the killing of a Kashmiri Pandit government employee in his office in Jammu and Kashmir a day ago.

Security forces trapped the two terrorists, who had infiltrated into Jammu and Kashmir recently and managed to escape from an anti-terror operation two days ago, in Brar in the Aragam area of Bandipora district in north Kashmir on Friday. They were killed in an encounter, a police spokesman said.

The duo came under the scanner of the security forces during tracking of a local LeT terrorist, named Lateef Rather alias Osama, who was involved in terror incidents in Srinagar and Budgam in the last two months, the police spokesman said.

A week ago, the movement of Rather was confirmed in the Salindar area of Bandipora where he had gone to receive a fresh group of LeT terrorists who had infiltrated into the union territory, the spokesman said.

The presence/movement of these terrorists was confirmed and shared with the Bandipora police. Accordingly, an operation was launched on May 11 resulting in the elimination of a local terrorist, identified as Gulzar Ahmed Ganaie of district Baramulla.

However, the two Pakistani terrorists managed to escape from the spot. A police team kept following their footprints and their presence was confirmed technically in the Chadoora area of Budgam where the Kashmiri Pandit government employee was killed on Thursday.

Thereafter, the spokesman said, their footprints were again confirmed in Brar and accordingly the operation was launched on Friday, resulting in their killing.

A hunt was underway for Rather alias Osama, the spokesman said.

Incriminating materials, arms and ammunition were recovered from the encounter site in Brar and all the recovered materials have been taken into case records for further investigation.

Earlier in the day, Inspector General of Police (IGP) of Kashmir Vijay Kumar said the two terrorists trapped in Brar were Pakistani and belonged to the LeT. They had infiltrated into Jammu and Kashmir recently. They had managed to escape during an encounter in the Salinder forest area on Wednesday, he said.

"IGP Kashmir Vijay Kumar has congratulated joint team of Police/SF for tracking down the said foreign terrorists who had recently escaped during an encounter and whose presence was technically confirmed yesterday at terror incident site at Chadoora which confirmed their involvement in killing of Rahul Bhat," the spokesman said.

Bhat (35), who was posted in the Tehsil office in Chadoora under a special employment package for Kashmiri Pandit migrants, was shot dead in his office.