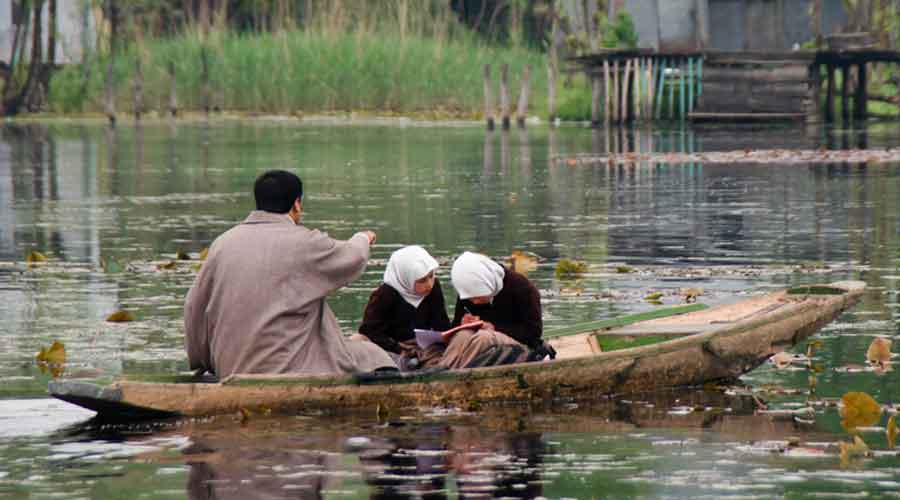 The Group of Concerned Citizens (GCC) on Friday alleged a ploy in Wednesday’s decision by the Centre to designate five official languages for Jammu and Kashmir, where Urdu had been the sole official language for 131 years
Shutterstock
Muzaffar Raina   |   Srinagar   |   Published 05.09.20, 01:24 AM

The Valley’s civil society has woken from a yearlong slumber to oppose a purported central government design to impose Hindi on Jammu and Kashmir and voice alarm at a “learning crisis” triggered by schools remaining shut for 381 of the last 390 days.

The Group of Concerned Citizens (GCC) on Friday alleged a ploy in Wednesday’s decision by the Centre to designate five official languages for Jammu and Kashmir, where Urdu had been the sole official language for 131 years.

Among the signatories to its statement are two dozen former bureaucrats, retired university vice-chancellors and other academics, retired judges, journalists and lawyers.

The development comes at a time minority ethnic groups have stepped up their campaign for official language status for the Gojri, Pahari and Punjabi languages.

This follows the Centre’s Wednesday move to include Kashmiri and Dogri — the languages of the region’s two biggest ethnic groups — along with Hindi and English in the list of official languages.

“It is feared that this move (having five official languages) may lead to divisive linguistic politics, as competing demands for inclusion of other languages such as Gojri, Pahari and Punjabi have already started cropping up. Even in the case of Kashmiri and Dogri, the question arises as to which of the many dialects of these languages will be adopted,” the GCC statement said.

The group has called for the retention of Urdu as the sole official language.

The GCC statement comes after the government clampdown on August 5 last year had succeeded in silencing Kashmir’s people, including its leading civil society groups.

The only notable resistance had been offered by women from elite backgrounds who took to Srinagar’s streets last October against the August 5 decisions. They spent a night in jail and were released after signing bonds pledging silence.

Friday’s GCC statement suggested it was now the men’s turn to speak.

Former J&K Public Service Commission chairperson Shafi Pandit, who is part of the citizens’ group, said the GCC was a non-political group and had not issued any statement in more than a year because of the prevailing situation.

“We thought we should not hesitate to speak on an aspect that impacts our culture,” Pandit told The Telegraph.

He said the Centre had blacked out Urdu from its National Education Policy, 2020, although it was a “modern Indian language listed in the 8th Schedule as per Articles 344(1) and 351 of the Constitution”.

“(GCC) deeply regrets not to find the name of Urdu language in the entire document even once…. Not finding its name anywhere raises the suspicion about the future of this great language used very widely across the country by all the communities,” the GCC said.

The NEP talks about the teaching and promotion of “Indian languages” as a group without spelling out names except for a single reference to Hindi and multiple references to Sanskrit.

The GCC has also expressed fear that the Centre might replace the Persian script with Devanagari for the Kashmiri language.

The fear stems from the use of Devanagari instead of Persian by the California-based Unicode Consortium’s Common Locale Data Repository (CLDR) for use in computer applications. Persian has for centuries been the script used for Kashmiri.

Citing “the cultural, emotional, religious sensibilities of Kashmiris associated with the Kashmiri language, and its viable and time-tested standard Persian script written in Nastaliq style”, the group has urged the government to take up with the Unicode Consortium the matter of replacing Devanagari with Persian for Kashmiri in the CLDR.

The GCC has expressed regret that the Centre has not included Arabic in the list of foreign languages taught at the secondary level in schools.

Its statement said that educational Institutions had remained open for just 9 of the past 390 days, first because of the government clampdown and then because of the pandemic.

“The closure of educational institutions… has resulted (in) a serious learning crisis. Now with the closure of schools till (the end of) September 2020, the situation is bound to worsen further,” it said.

The GCC has called for the restoration of 4G services so that the setback in learning can be made up through online classes.