Advertisement
Home / India / Jammu and Kashmir police detain 150 people, most of them from Jamaat-e-Islami

Jammu and Kashmir police detain 150 people, most of them from Jamaat-e-Islami 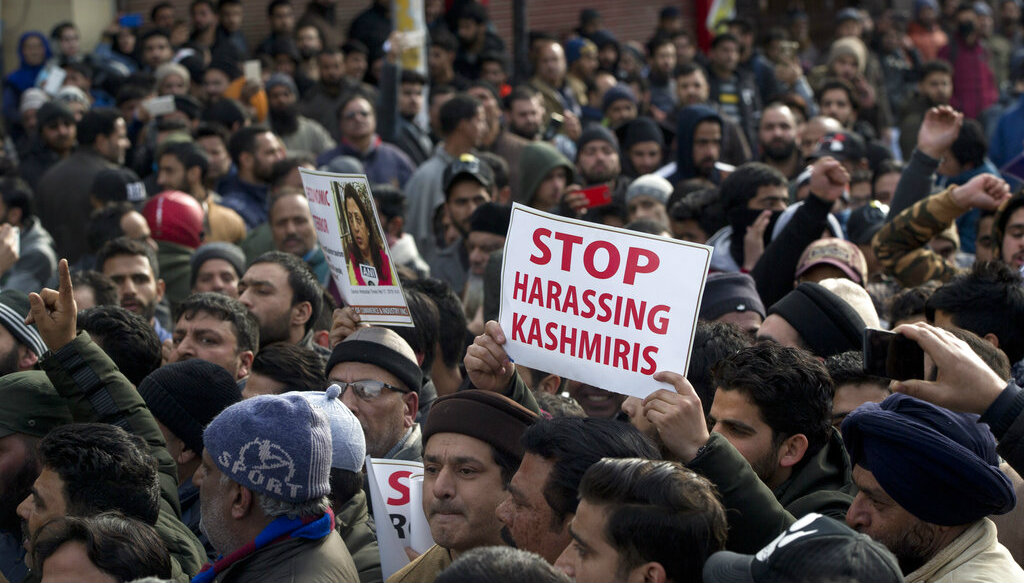 Srinagar, Feb 23 (PTI) Nearly 150 people, mainly from the Jamaat-e-Islami Jammu and Kashmir, were detained during the intervening night of Friday and Saturday as tension gripped the Valley ahead of a hearing by the Supreme Court on Article 35A of the Constitution.

Jamaat chief Abdul Hamid Fayaz was among those picked up by the police.

Although police termed the detentions as routine, saying leaders and potential stone pelters have been picked up in the past, officials privy to the developments said this is the first major crackdown on the Jamaat.

The hearing on Article 35A, which provides special rights and privileges to natives of Jammu and Kashmir, is likely to take place in the apex court on Monday.

The outfit has been touted to be the political wing of the Hizb-ul Mujahdeen, but the organisation has always maintained that it is a social and religious group.

There was palpable tension in the air, and people were seen grouping on streets even as security was tightened.

As many as 100 additional companies of the paramilitary (nearly 10,000 personnel) have been sent to the Kashmir Valley in the wake of a potential law and order situation.

Officially, no one has been able to provide reasons for such a massive deployment.

The Jamaat issued a statement condemning the detentions, saying: 'The move is a well designed conspiracy to pave way for further uncertainty in the region.'

The outfit claimed that during the intervening night of February 22 and February 23, police and other agencies launched a mass arrest drive and raided several houses in the Valley. Dozens of its central and district level leaders, including its chief Abdul Hamid Fayaz and spokesperson Zahid Ali, were arrested.

'The way forces personnel unleashed the spree of mass arrest and detained dozens of Jamaat members prior to the hearing seems something is hatching behind the curtains. Any attempt of eroding or tampering Article 35A is unacceptable for people of Jammu and Kashmir,' it said.

The action comes days after the Pulwama terror attack.

Reacting to the valley-wide crackdown, PDP president Mehbooba Mufti questioned the legality of the action, saying the 'arbitrary' move will only 'precipitate matters' in the state.

In the past 24 hours, Hurriyat leaders & workers of Jamaat organisation have been arrested. Fail to understand such an arbitrary move which will only precipitate matters in J&K. Under what legal grounds are their arrests justified? You can imprison a person but not his ideas.

Moderate Hurriyat Conference chairman Mirwaiz Umar Farooq also condemned Malik's detention and the crackdown on the Jamaat, saying 'force and intimidation' will only 'worsen' the situation.

'Strongly condemn the nocturnal crackdown on Jamat-e-Islami leadership and cadres and the arrest of Yasin Malik. Such illegal and coercive measures against Kashmiris are futile and will not change realities on ground. Force and intimidation will only worsen the situation,' he posted on Twitter.

The states illegal crackdown on socio religious organisations and leadership and the attempt to strangulate Kashmir media @GreaterKashmir @Kashmir_Reader to pressurise them,reflects the continuation of authoritarian and repressive mindset which has only proved counterproductive.

Leader of People's Conference, an ally of the BJP, Sajad Lone also said such crackdowns in the past have yielded no results.

'Gov (sic) seems to be on an arrest spree. Just a word of caution. Large scale arrests took place in 1990. Leaders were ferried to Jodhpur and many jails across the country. Things worsened. This is a tried tested and failed model. Please desist from it. It won't work.Things will worsen,' he tweeted.

BJP mum but its allies slam attacks on Kashmiris