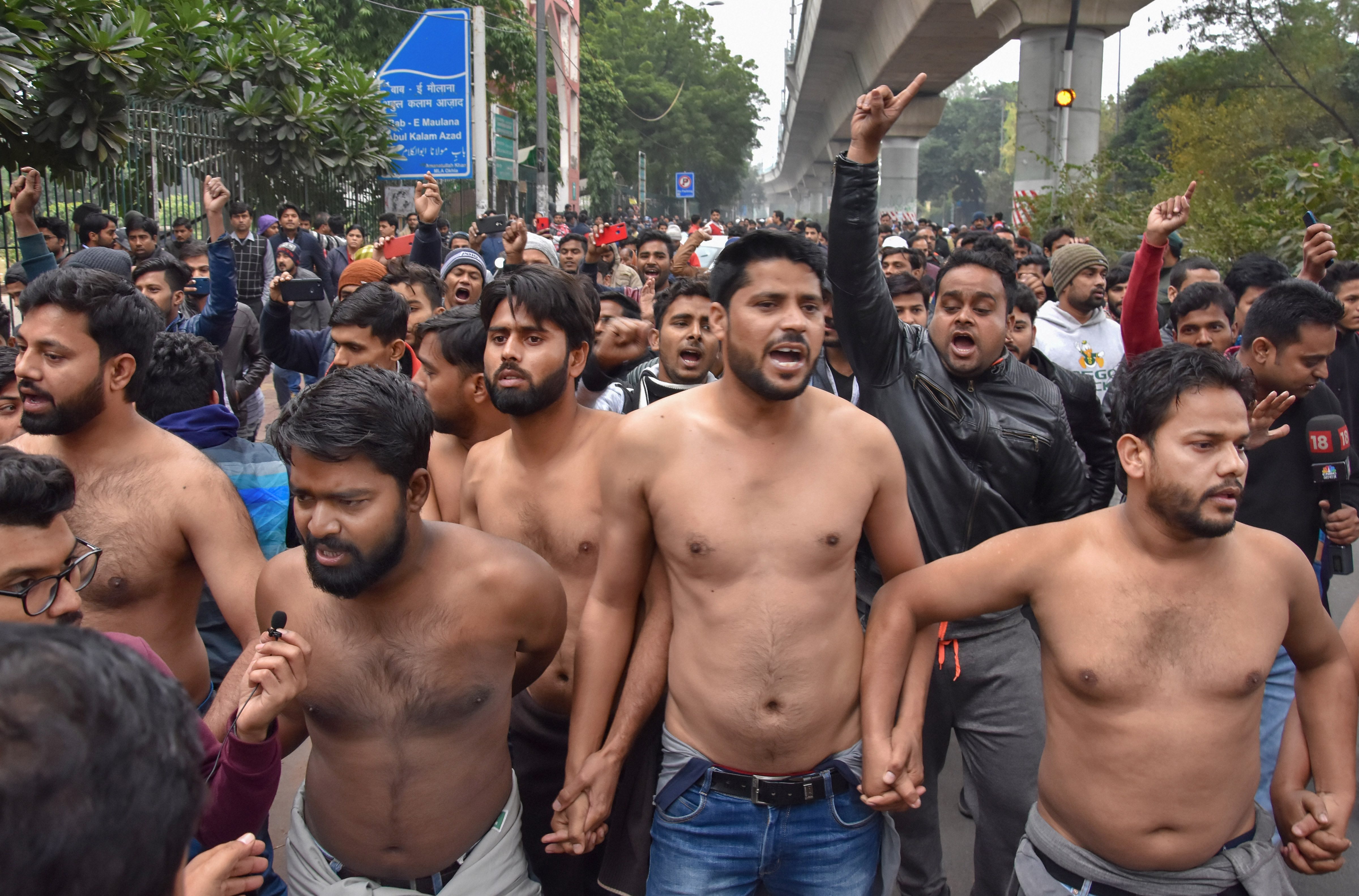 Students protest shirtless at the campus of Jamia Millia Islamia following the clashes that emerged between the students and Delhi police yesterday, in New Delhi, Monday, December 16, 2019
PTI
PTI   |   New Delhi   |   Published 16.12.19, 07:14 AM

A group of Jamia Millia students stood shirtless in the bone-chilling cold outside the university gates on Monday and formed a human chain to protest the police action against their colleagues a day earlier.

A group of about 10 students, shouting slogans of 'Inquilab Zindabad', accompanied by their fellow colleagues, took out a small march, demanding a CBI inquiry into the 'police brutality'.

The students carried a tricolour, clapped and raised slogans against the central government and the Delhi police.

'This government is anti-minority, anti-students, anti-poor. We won't tolerate this. Won't keep mum,' they said.

A group of students claimed that the police on Sunday damaged two mosques on the university campus, beat up the Imam and also a blind student, Arsalan (27), who was in the library.

The protesting students said a meeting will take place around 12pm to chart out the future course of action.

Anas Siddiqui, a student, added that the police called them 'terrorists' and dared them to come out of the campus and face them.

'Our colleagues have been beaten up badly. The policemen entered bathrooms, libraries and beat up girls. Our protest is against the goons called the Delhi police,' a research scholar, who did not want to be identified, said on Monday.

Delhi chief minister Arvind Kejriwal and university vice-chancellor Najma Akhtar did not even bother to visit the injured students, the protesters said.

Earlier, when a few women escorted an injured student to narrate their ordeal to the media, some people were seen asking them not to give any statements.

'We were inside the university when the police barged in. Around 20 policemen came from gate no. 7 and 50 others came from the rear gate. We told them we were not involved in the violence. They didn't listen. They didn't even spare the women,' Khanzala, who suffered injuries to the legs and abdomen, said.

A women broke down as Khanzala showed his injuries to the media.

Abdur Rehman, a student of the physiotherapy department, claimed that hospitals in the locality, barring Holy Family, denied treatment to the injured students.

Rakshanda, another student, alleged that the police failed to control the violence on Sunday and targeted them when they could do nothing about the actual culprits.

The protesters alleged two specially-abled students were also attacked during the police action, as they shared videos among themselves.

In the video, an MBA student Arsalan was seen claiming that he was beaten up inside the library.

A few students and locals were seen clearing the roads to allow smooth movement of vehicles.