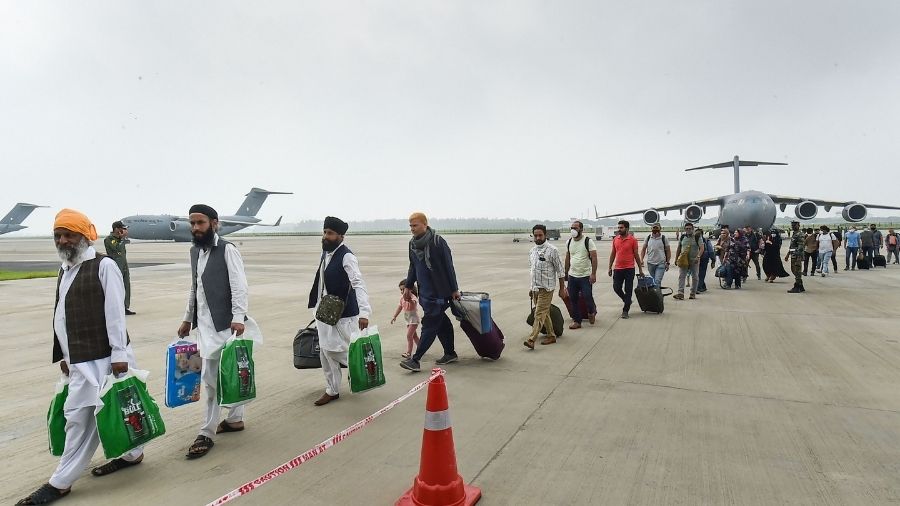 So far, India has evacuated over 800 people amid a deteriorating security situation in Kabul and scramble by various nations to rescue their citizens.
File picture
Our Bureau, PTI   |   New Delhi   |   Published 24.08.21, 02:35 PM

India's complex mission to evacuate its citizens and Afghan partners from Kabul after its swift takeover by the Taliban last week has been named as "Operation Devi Shakti".

The name of the operation was known when External Affairs Minister S Jaishankar mentioned it in a tweet on Tuesday while referring to the arrival of a fresh batch of 78 evacuees in Delhi.

India began the complex evacuation mission by airlifting 40 Indians from Kabul to Delhi on August 16, a day after the Taliban seized control of the Afghan capital city.

So far, India has evacuated over 800 people amid a deteriorating security situation in Kabul and scramble by various nations to rescue their citizens.

Thousands of Afghans have been crowding around the Kabul airport for over a week, in a desperate attempt to flee the country fearing the Taliban's brutality.

At a meeting of the Cabinet Committee on Security, Prime Minister Narendra Modi on August 17 directed officials to ensure the safe evacuation of all Indians from Afghanistan and provide refuge to Afghan Sikhs and Hindus wanting to come to India.

In the last few days, India stepped up its efforts to evacuate Indians and its Afghan partners from Kabul amid increasing hostilities by the Taliban.

After India evacuated the Indian embassy staff from Kabul on August 17, Jaishankar had described the mission as a "difficult and complicated" exercise.

On Tuesday, India brought back 78 people, including 25 of its nationals and a number of Afghan Sikhs and Hindus from Dushanbe, a day after they were evacuated from Kabul to the Tajik city.