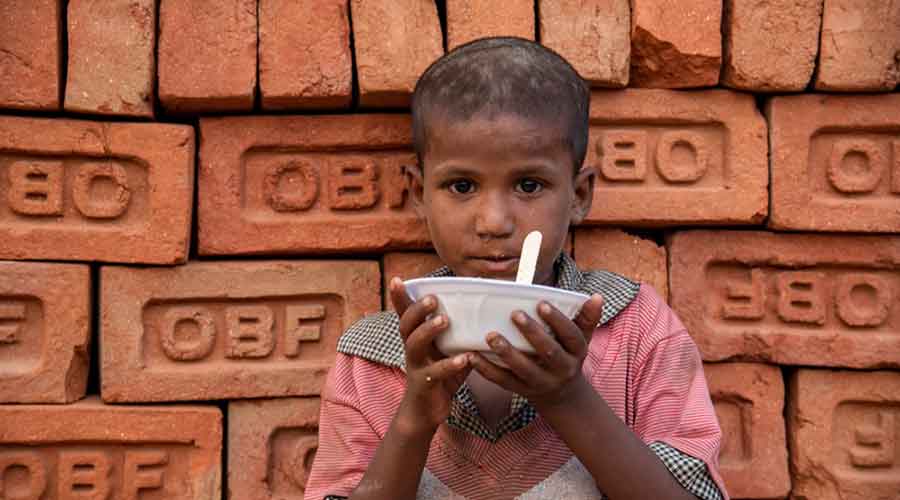 With a score of 27.5, India has a level of hunger that is serious, the report prepared jointly by Concern Worldwide and Welthungerhilfe states.
Shutterstock
Anita Joshua   |   New Delhi   |   Published 16.10.21, 02:12 AM

India has slipped seven notches on the Global Hunger Index 2021 released on Thursday, falling behind Pakistan, Bangladesh and Nepal and positioned at 101 among 116 countries ranked for the peer-reviewed annual report.

India responded sharply to the downgrade, questioning the methodology employed.

“It is shocking to find that the Global Hunger Report 2021 has lowered the rank of India on the basis of FAO (Food and Agriculture Organisation) estimate on proportion of undernourished population, which is found to be devoid of ground reality and facts and suffers from serious methodological issues,” the women and child development ministry said.

“The publishing agencies of the Global Hunger Report, Concern Worldwide and Welt Hunger Hilfe, have not done their due diligence before releasing the report,” the ministry added.

The response from the government followed a day of criticism over the sharp slide.

In 2014, when the Narendra Modi government took office, India was ranked 55.

With a score of 27.5, India has a level of hunger that is serious, the report prepared jointly by Concern Worldwide and Welthungerhilfe states.

The GHI is a tool for comprehensively measuring and tracking hunger at global, regional and national levels.

Data on undernourishment is collected from the UN Food and Agriculture Organisation (FAO), while that on wasting and stunting are collated from Unicef, WHO, World Bank and Demographic and Health Surveys Programme figures. The mortality numbers are taken from the United Nations Inter-agency Group for Child Mortality Estimation.

Based on the values of the four indicators, the GHI determines hunger on a 100-point scale, where 0 is the best possible score (no hunger) and 100 is the worst. Each country’s GHI score is classified by severity, from low to extremely alarming. The 2021 GHI scores include data from 2016-2020.

The women and child development ministry alleged that the methodology used by the FAO to prepare “The State of Food Security and Nutrition in the World 2021” report was faulty.

In the subcontinent, Sri Lanka ranks the highest at 65, followed by Bangladesh and Nepal who share the same rank at 76 with a score of 19.1, and Pakistan at 92. The countries below India include Afghanistan, the two Congos, Sierra Leone, Haiti, Liberia, Chad, Yemen and Somalia.