In the morning, an Orange alert was issued for 7 districts, including the four as well as Thrissur, Palakkad and Malappuram 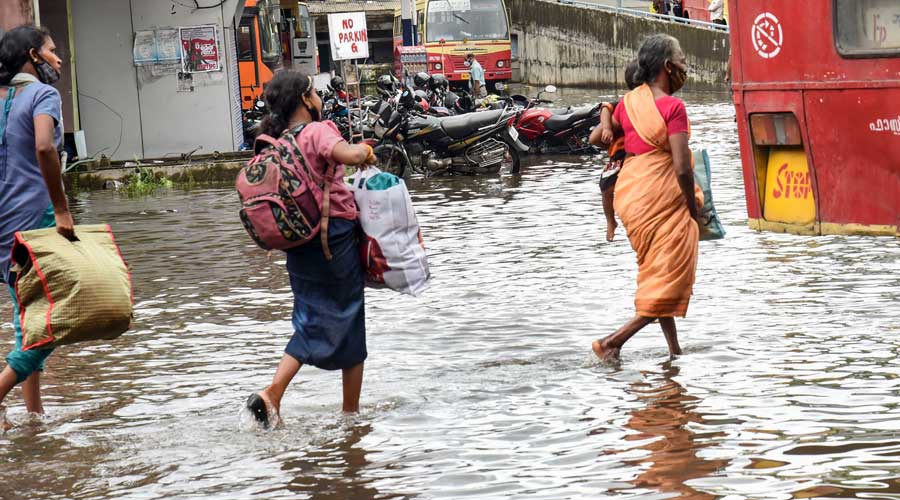 As heavy rains continued to lash several parts of Kerala, the India Meteorological Department (IMD) on Wednesday afternoon issued a Red alert in four districts of the state for the day, indicating extremely heavy rainfall.

The Red alert was issued in the northern Kerala districts of Kozhikode, Wayanad, Kannur and Kasaragod.

In the morning, IMD issued an Orange alert for 7 districts, including the four as well as Thrissur, Palakkad and Malappuram.

The Orange alert in Thrissur, Palakkad and Malappuram continues to be in effect.

An Orange alert was also issued by IMD in Kannur and Kasaragod for Thursday.

Various weather forecasting centres in the country have predicted isolated heavy rains across the state today.

The Kerala State Disaster Management Authority has predicted widespread rain in the state for the next 5 days with chances of isolated thunder, lightning and strong winds due to the cyclonic circulation in and around Kerala as well as a low pressure trough from north Kerala to Vidarbha region.

The Central Meteorological Department has predicted isolated heavy and very heavy rainfall showers in the state for the next 2 days and heavy rainfall on the 2 days after that.

Kerala has been experiencing heavy rainfall for the past few days and it has disrupted normal life in certain places of the state.

Considering the heavy rains even as the onset of Southwest monsoon is expected only by the end of this month, the state government had called a meeting of the district collectors and issued directions to deal with any eventualities.

The State Disaster Management Authority (SDMA) has asked people to stay away from rivers and other water bodies until the rains subside.

The SDMA have also advised people not to travel to hilly regions unless it's an emergency and to avoid night travel until the rain subsides.

The district administrations have also warned the people against staying near coastal areas of high tide.

The IMD has earlier predicted that the Southwest monsoon, which is also known as Edavapathy in the state, is likely to bring its first showers to Kerala by May 27, five days earlier than the normal onset date.