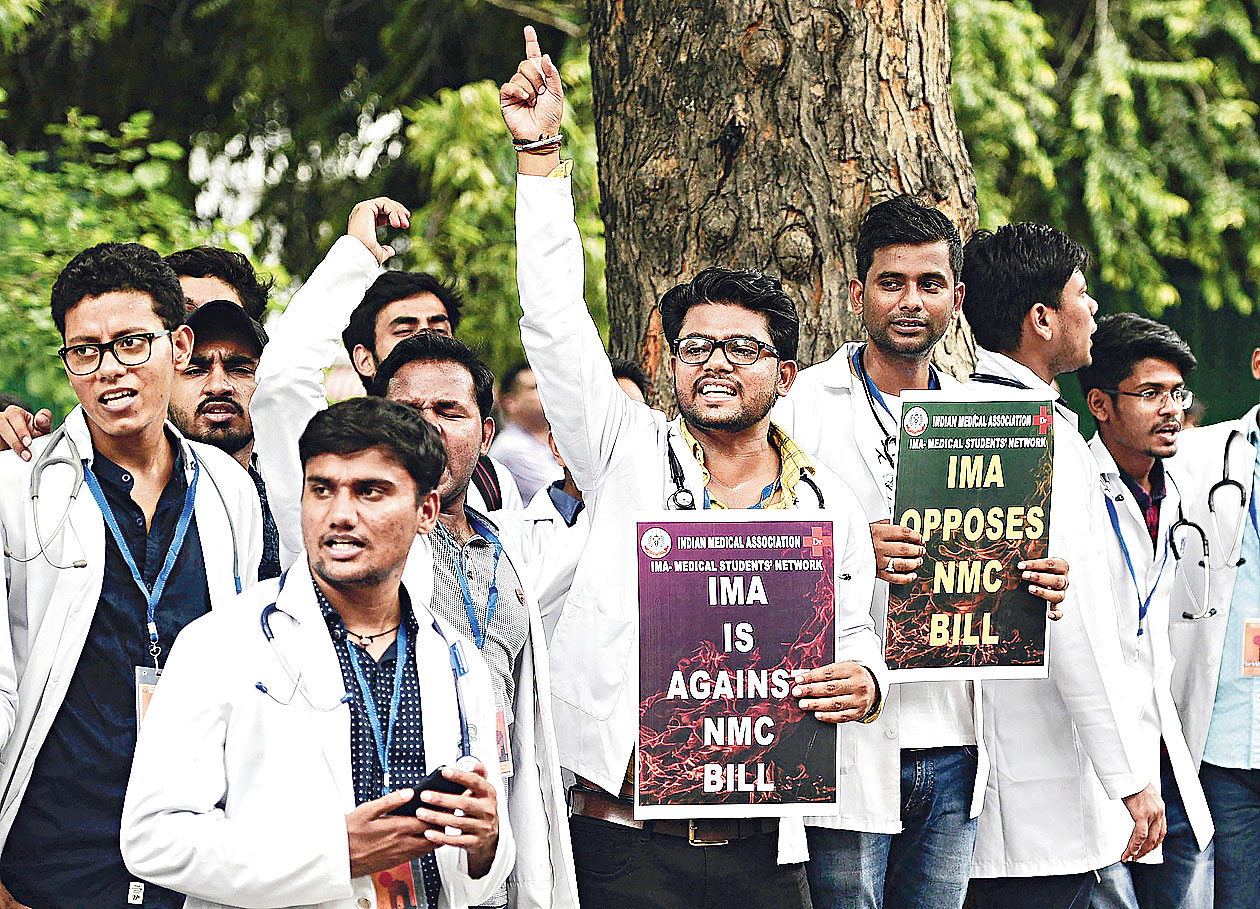 The Indian Medical Association (IMA) has issued a call for a nationwide withdrawal of all non-essential medical services on Wednesday in protest against proposed legislation that doctors fear will increase the cost of medical education and corruption in admissions.

The IMA, the country’s largest body of doctors, and medical students from across India are opposing the National Medical Commission (NMC) Bill, 2019, that was passed by the Lok Sabha on Monday and is awaiting approval by the Rajya Sabha.

The NMC bill seeking to establish a new regulatory structure for medicine has, among other provisions, proposed to regulate fees for up to 50 per cent of seats in private medical colleges and allow community health workers to deliver health care.

The bill also provides for a national-eligibility-cum-entrance-test (NEET) for entrance to all medical colleges and a national exit test (NEXT) to serve as a “licentiate exam” for entrance to postgraduate medical courses and a screening test for foreign medical graduates.

The IMA and sections of medical students have called for public demonstrations across the country on Wednesday to oppose the bill saying it will make medical education less accessible to the poor and middle-class populations.

Sections of health activists have condemned the strike called by the IMA.

“The IMA leaders have called another unlawful strike, putting patients’ lives in danger even while facing a contempt case in the Supreme Court,” said Kunal Saha, the founder of the People for Better Treatment.

Saha had filed a contempt petition in the apex court in response to a nationwide strike called by the IMA earlier this year opposing violence against doctors.

Saha has cited a 2014 Supreme Court ruling that says doctors should not go on strike.

“If this bill is passed, private medical colleges could charge whatever they want for half their seats,” said Harjit Singh Bhatti, vice-president of the IMA’s junior doctors’ network.

“The fees for seats available now for Rs 8 lakh or Rs 10 lakh per year in private colleges could rise to above Rs 20 lakh or Rs 30 lakh.”

Bhatti said students were also concerned that the coupling of NEXT and NEET would amplify opportunities for corruption, particularly during internal examinations in private colleges.

“Those with clout and money would be able to play the system — get extra in internal exams,” Bhatti said.

Aswin Surjit from Cochin and vice-chair of the IMA’s junior doctors’ network said the common NEET-NEXT might also prevent many doctors from pursuing postgraduate courses.

Medical colleges in India collectively offer about 38,000 postgraduate seats to about 68,000 MBBS graduates.

“Many students from poor and middle-class families work as residents for two or three years and then take up the PG exam,” Surjit said.

“A common NEXT-NEET would not give such students opportunities to take up PG studies.”

The IMA, which has also criticised the fee proposals in a statement released on Tuesday, expressed concern about the bill’s provision to licence community health providers after some training to practice elements of modern medicine.

The IMA said it would further intensify its agitation if the government continued to display indifference to the concerns raised by doctors.

“We will never allow the licensing of unqualified non-medical persons to kill our patients,” the IMA said in a statement.

“Thousands of doctors and medical students will be on the streets tomorrow (Wednesday),” Bhatti said.

“Even existing undergraduate medical students are worried. What if private colleges decide to increase fees midway through the five-year course?”