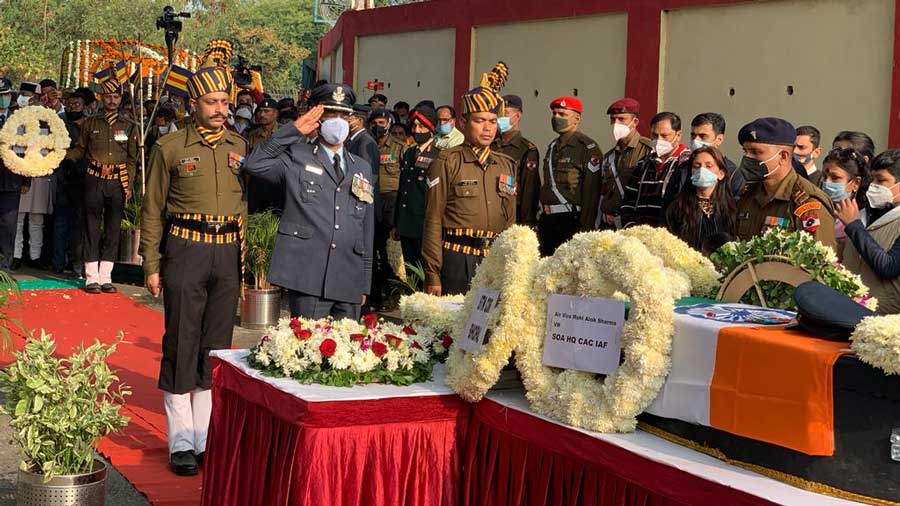 The mortal remains of Group Captain Varun Singh, who succumbed to his injuries after surviving last week's helicopter crash in Tamil Nadu, were consigned to flames with full military and state honours in Bhopal on Friday.

Wrapped in a tricolour, the mortal remains were brought to the cremation ground in Bairagarh area here from the Military Hospital here in a flower-bedecked Army truck with people raising slogans of 'Bharat mata ki jai' and 'Group Captain Varun Singh amar rahe'.

As the mortal remains reached the cremation ground, a ceremonial guard of honour was given by the defence forces personnel, after which the senior services officers paid their tributes by laying floral wreaths on the coffin of the Group Captain.

After the rituals were performed by a priest and the family members, his younger brother, a Lieutenant Commander in the Indian Navy, and his son lit the funeral pyre amid the slogans of 'Group Captain Varun Singh amar rahe' raised by the people.

Singh's wife and daughter, his father Colonel K P Singh (retd), mother Uma besides, other close relatives were also present there and bid a teary-eyed farewell to him.

The air warrior was conferred with the Shaurya Chakra, India's third highest peacetime gallantry award, in August this year for displaying exemplary composure and skill when his Tejas aircraft developed a technical snag during the sortie.

The 39-year-old officer, who was known to be an excellent test pilot, is survived by an 11-year-old son, an eight-year-old daughter and his wife. His younger brother Tanuj Singh is posted as Lieutenant Commander in the Indian Navy.

The Group Captain's family originally hails from Ghazipur in Uttar Pradesh. He was admitted to a hospital in Wellington in Tamil Nadu with severe burn injuries following the helicopter crash. A day later, he was shifted to the Command Hospital in Bengaluru, but after battling for life nearly a week he succumbed to his injuries on Wednesday.

On Thursday, CM Chouhan had announced that the Madhya Pradesh government will give Rs one crore 'Samman Nidhi' to the kin of the officer.

"The state government will give Rs one crore Samman Nidhi to the family of the martyred Group Captain Varun Singh and in consultation with them, install his statue, name an institution after him and also offer a job to his kin in the state government as per the laid down practices," he had told reporters.