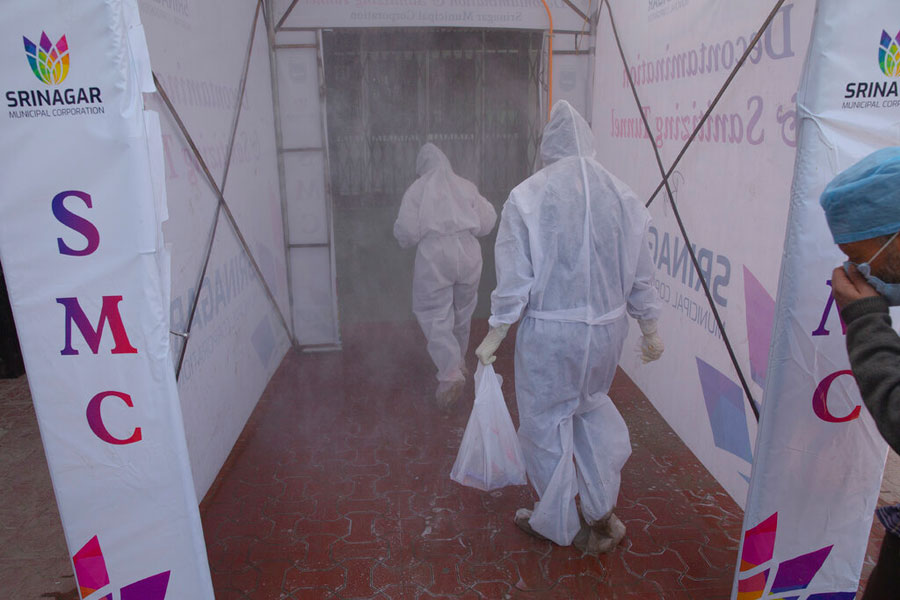 Medical staff wearing protective gear walk inside a disinfecting tunnel outside a hospital where most coronavirus patients are being treated in Srinagar
(AP)
Muzaffar Raina   |   Srinagar   |   Published 09.04.20, 10:57 PM

Hundreds of people defied the government’s ban on social gatherings in a South Kashmir town on Wednesday to join the funeral of a local Jaish-e-Mohammad militant, adding to the worries of an administration battling the rapid spread of the coronavirus in the Valley.

Police have registered a case against the mob.

Sajjad Nawab Dar, 23, had died in a gunfight in Sopore earlier in the day.

Gunfights have escalated in the Valley over the past 10 days, leaving 10 militants and five army men dead. One CRPF man also died in a militant attack.

But it’s militant funerals that are also becoming a major worry for the Jammu and Kashmir administration. Last week, scores of residents had joined the funeral of four militants killed in a gunfight in South Kashmir.

On Wednesday, hundreds of people, including women, joined Dar’s funeral, ignoring the ban on social gatherings. Videos that have gone viral show the agitated mob shouting pro-azadi slogans as they take Dar’s body for burial, many of them recording the event on their mobiles. Most of them didn’t wear masks.

The police said they had registered a case late on Wednesday evening against the people who participated in Dar’s funeral, ignoring the Covid-19 advisory.

It was not clear whether any arrests had been made but police sources said they had identified some men who took part in the funeral.

“Dar’s next of kin had given a written undertaking to adhere to social distancing when his body was handed over to them. An investigation has started and the offenders will be dealt with strictly as per the law,” a spokesperson said.

The Valley has been under a complete lockdown for the past three weeks since the first coronavirus case surfaced in Srinagar. The number of positive cases has since swelled to 152. In Jammu, the number has risen to 32.

Four people have died, three in the Valley and one in Jammu. Two persons have tested positive in Sopore.

People in the Valley have for the past three decades joined funerals of militants in large numbers but the crowds had thinned a little following the clampdown that followed the government’s August 5 move to scrap the then state’s special status under Article 370.

The state has since been split into two Union Territories.

Such incidents have been an eyesore for the administration as they show support for militants in the Valley. This time the authorities are doubly worried as large gatherings can derail the effort to contain the spread of the virus.

Earlier this week, two families from South Kashmir had claimed that at least two militants who died in a recent gunfight in Keran, Kupwara, were their kin.

Five members of the army’s elite special forces and five militants had died in a gunfight in Keran on Sunday.

The bodies were not handed over to the families and the police have collected DNA samples to verify the claims of the two families.

The police said two local militants had disappeared earlier and might have gone to Pakistan for arms training. It is suspected that they were returning as part of the group killed in the Keran encounter.