Thousands of people in 38 districts came out waving national flags, party signs, banners and placards and assembled neatly on major roads and thoroughfares 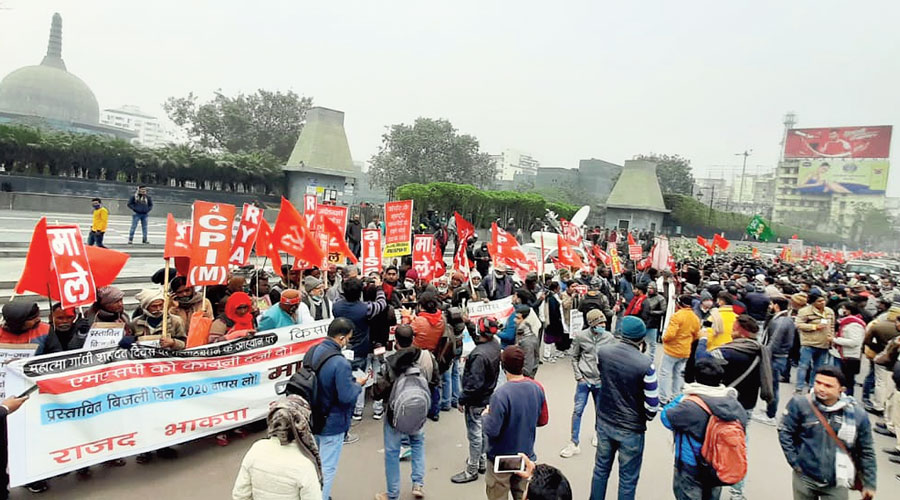 A large number of people braved icy winds and chilly weather across Bihar on Saturday on Mahatma Gandhi’s death anniversary (Martyrs’ Day) to come out and form a human chain to express solidarity with the farmers protesting against the three controversial farm laws in Delhi.

The Opposition Grand Alliance of the Rashtriya Janata Dal (RJD), the Congress, the CPI-ML, the CPI and the CPM had given a call to form the human chain in support of the protesting farmers.

Apart from their workers and supporters, the parties had also appealed to the common people to participate in the human chain to protect farmers, agriculture and the country.

Thousands of people in all 38 districts of the state came out waving national flags, party signs, banners and placards and assembled neatly on major roads and thoroughfares, including national highways. They shouted slogans against the central government and the new farm laws.

At many places farmers came with bullock carts and tractors to participate in the human chain, disrupting the movement of normal traffic, but the short time of half-an-hour from 12.30pm ensured that the commuters did not suffer much.

The farmers spoke about the poor condition of agriculture in Bihar and demanded that their produce be bought at MSP (minimum support price). The state government officially procures paddy and wheat at MSP, but the benefit seldom trickles down to the farmers.

Top Opposition leaders participated in the event with their supporters in Patna and asserted that their struggle will continue till the three farm laws are repealed.

“The central government has planned to hand over the land of the farmers to the capitalists. It is making the jawans (soldiers) and kisans (farmers) fight with each other so that the nefarious plan to favour its fund-givers succeeds,” RJD leader Tejashwi Prasad Yadav, who joined the human chain in Patna, said.

CPI-ML general secretary Dipankar Bhattacharya thanked the people of Bihar for standing in support of the farmers’ protest. He said that the agitation will now attain greater heights.

“The BJP was publicising that there was no protest in Bihar. Its leaders should see how the people have come out to form a human chain against the black farm laws. The demand for giving legal guarantee on the MSP and bringing back the Agriculture Produce Market Committee (APMC) Act is also becoming stronger,” Bhattacharya said.

The Congress leaders and supporters also participated in the human chain across the state.

AICC in-charge for Bihar, Bhakta Charan Das, joined the protest near Bhitiharwa Ashram that was established by Gandhi in West Champaran district, while other senior leaders participated in the human chain formed outside the state Congress headquarters at Sadaquat Ashram in Patna.