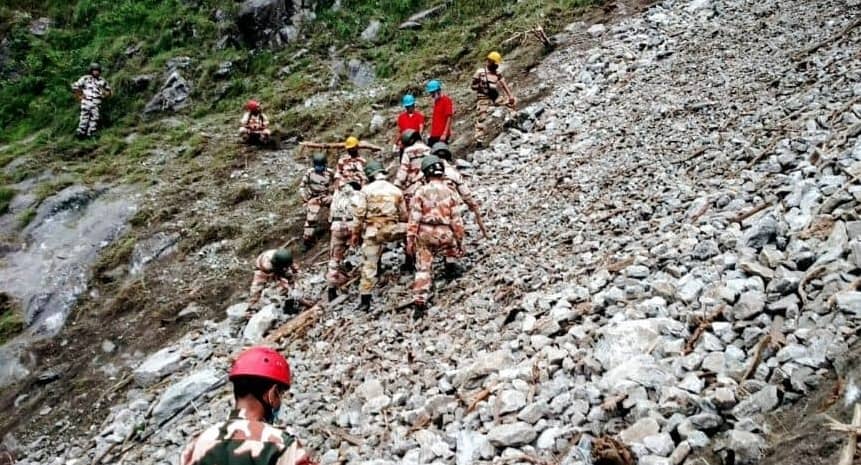 Six more bodies were recovered from the site of the landslide in Himachal Pradesh's Kinnaur district, taking the death toll to 23 on the fourth day of rescue and search operations on Saturday, a senior official said.

The search and rescue operation for the rest of the nine missing persons is underway, he added.

Meanwhile keeping in view the continuous falling of shooting stones at the sliding point, Nichar Sub-Divisional Magistrate (SDM) Manmohan Singh ordered to restrict all type of vehicles at this point for the safety of public from 9 pm to 9 am.

In his order issued on Thursday, he stated that the station house officer of Bhawanagar police station would ensure deputing of police force at both ends of the site.

On Friday evening, two people were injured after stones falling down a mountainside hit their bus near the area.

In the meantime, Mokhta said search and rescue operations, which had been suspended on Friday night, resumed again on Saturday around 6 am.

An SUV and its passengers feared buried under the rubble could not be traced so far, he said, adding that it might be possible that the vehicle rolled down with the debris.

The rescue operation is being carried out jointly by the National Disaster Response Force (NDRF), Indo-Tibetan Border Police (ITBP) and members of local police and home guards.

On the day of the incident, 10 bodies were recovered and 13 people rescued.

Earlier on Wednesday, eight bodies were found trapped in a Tata Sumo taxi during the search and rescue operation.

Two cars had also been recovered in damaged condition on Wednesday, but no one was found in them.

Earlier on Thursday, four bodies were found from the landslide site, while three were taken out on Friday.

Chief Minister Jai Ram Thakur had informed the state assembly after visiting the spot on Thursday that 16 people were still missing.

After that, six bodies have been recovered so far. At least nine people are still missing, officials said.

An HRTC bus, which along with other vehicles, was buried under the debris, was found in a badly damaged condition on Thursday.

A truck was also found, which had rolled down towards a riverside due to stones falling down a mountainside, and the driver's body was recovered.