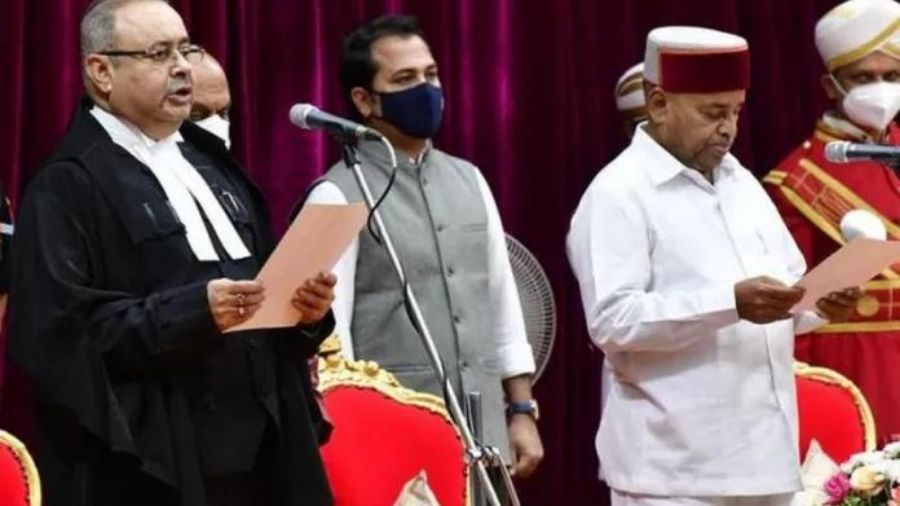 A case has been lodged against some unknown people for allegedly threatening the Chief Justice of the Karnataka High Court Ritu Raj Awasthi over its verdict on the hijab row in the state, reports ndtv.com.

In the FIR, lawyer Umapathi S said he had got a WhatsApp video message that openly threatened murder murder to Awasthi.

According to the lawyer, the video may have have originated from Tamil Nadu (perhaps Madurai district) in an open public meeting, where the speaker refers to the murder of a Judge while he was strolling in Jharkhand.

Karnataka High Court had earlier upheld the ban on the hijab in classrooms, ruling that wearing the headscarf is not an essential religious practice in Islam and uniform is a reasonable restriction on the freedom of speech and expression.

Dismissing the petitions filed by six students, a bench of Chief Justice Ritu Raj Awasthi and Justices Krishna S. Dixit and J.M. Khazi said the government was within its rights to issue an order empowering schools and colleges to prescribe uniform for students.

"The way hijab imbroglio unfolded gives scope for the argument that some 'unseen hands' are at work to engineer social unrest and disharmony. Much is not necessary to specify," the three-judge bench headed by Awasthi said in the order.

The court, however, made it clear that it was not commenting on the ongoing police investigation.

During the course of the hearing, some counsels had brought to the notice of the court the alleged involvement of the Campus Front of India (CFI) and other organizations in inciting the Muslim students.

When the court sought to know, Advocate General Prabhuling Navadgi handed over a letter in a sealed cover to the bench.

"We have perused and returned copies of the police papers that were furnished to us in a sealed cover. We expect a speedy and effective investigation into the matter and culprits being brought to book, brooking no delay," the bench noted.

The judges observed that all was well with the dress code since 2004.

"I was shocked to see the video and its content. That's why I immediately approached the (high court) Registrar," the lawyer told NDTV.

In a letter to the Registrar, the lawyer said, "I received WhatsApp video message around 9:45 am from my contacts. The said video message is in Tamil language and after listening the same I was shocked to know the open threat of murder and target Hon'ble Chief Justice of Karnataka High Court and others in the wake of recent judgment of Hon'ble High Court of Karnataka banning of hijab."

A plea was filed in the Supreme Court challenging the Karnataka High Court verdict which dismissed pleas seeking permission to wear a Hijab inside the classroom, saying Hijab is not a part of the essential religious practice in the Islamic faith.

The petition was filed in the apex court by a Muslim student against the high court judgement.

Next in ‘secular’ classroom: Gita