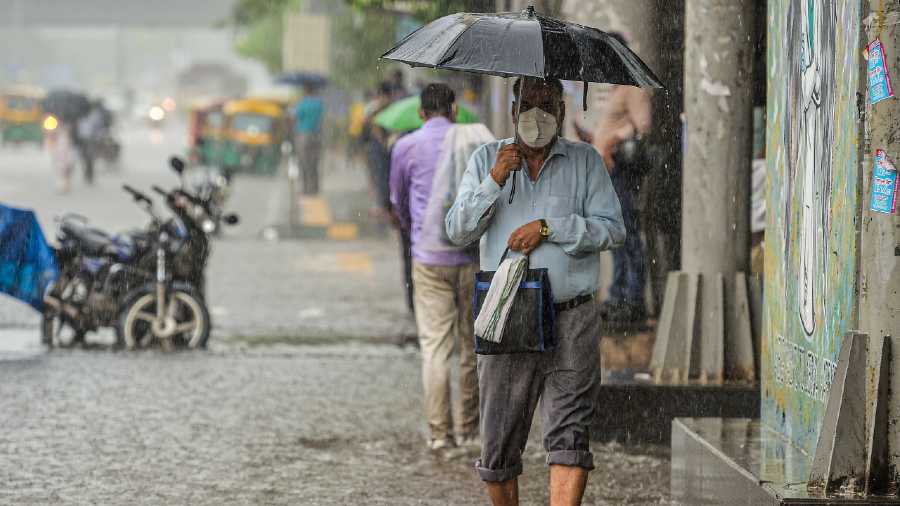 The rains also led to waterlogging and traffic snarls at many places of the national capital.

The minimum temperature recorded at the Safdarjung observatory was 24 degrees Celsius, three notches below normal, the IMD said.

The weatherman has predicted "generally cloudy sky with moderate rain" on Friday. The maximum and minimum temperature would be 25 and 32 degrees Celsius, respectively, it added.

The IMD had predicted thunderstorm with light to moderate intensity rain over entire Delhi and adjoining areas.

It had tweeted at 3.44 pm that thunderstorm with light to moderate intensity rain would occur over Delhi and adjoining areas including Faridabad, Ballabhgarh, Mahendergarh, Narnaul, Kosli, Charkhi Dadri, Jhajjar, Nuh, Sohna and many other places.

MeT department officials on Wednesday had said Delhi is in for a week-long spell of "light to moderate" rain with the monsoon trough passing through the region.

The monsoon, which arrived in Delhi on July 13 making it the most-delayed in 19 years, is now drenching Delhi, flooding low-lying areas and causing long traffic snarls.

Many Delhiites took to Twitter and complained about waterlogging and traffic jams due to the fresh spell of rainfall.

CA Kanj Goel tweeted, "Is it the Paris, which you talked about during election campaign @ArvindKejriwal @msisodia @raghav_chadha @aajtak @ZeeNews @ndtv @republic @Republic_Bharat This is hauz khas what about backward Colony God knows.#rain #delhi #waterlocking".

Delhi's air quality was in the 'satisfactory' category on Thursday evening. Data from the Central Pollution Control Board (CPCB) showed the hourly air quality index (AQI) at 5 pm at 64.