Heated exchanges in Rajya Sabha during debate on farm bills

As Reddy accused the Congress of promoting "middlemen" and some other remarks, Congress members created uproar 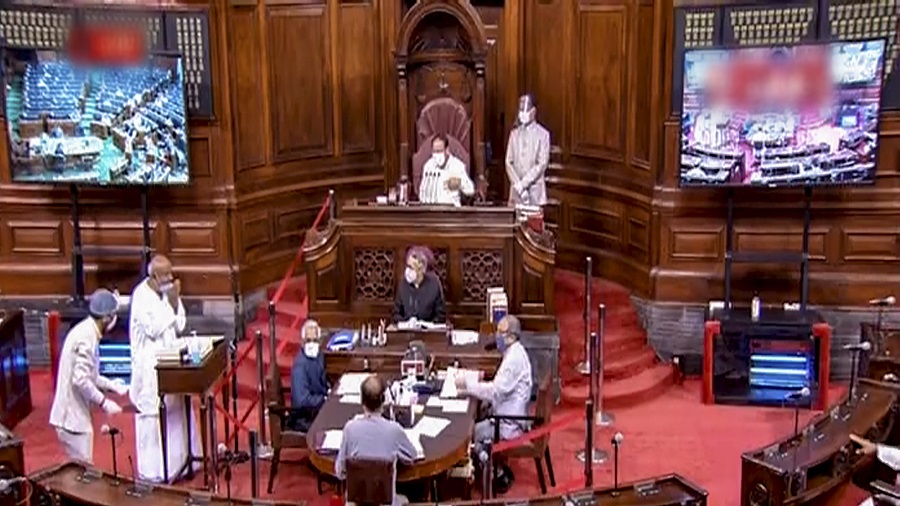 Rajya Sabha on Sunday witnessed heated exchanges between Congress and YSRCP members during the debate on the farm bills after an MP of the ruling Andhra party made some remarks against the grand old party, prompting them to demand an apology.

There was uproar in the House after V Vijaysai Reddy (YSRCP), while speaking in support of the bill, accused the Congress of "hypocrisy" as the bill contained the promises made by the Congress in its Lok Sabha poll manifesto.

As Reddy accused the Congress of promoting "middlemen" and some other remarks, Congress members created uproar.

Anand Sharma (Cong) said the member's conduct has not been as per the traditions of the House and he should retract his statement and apologise.

L Hanumanthaiah, who was in the chair at the time, said he would look into the records and expunge any objectionable remarks made. "If there is anything objectionable it will be taken off the records," he said.

The din continued for sometime in the House with YSRCP and Congress members engaged in heated arguments.

Reddy said the bill was in favour of the farmers as it promoted contract farming that would ensure sale of his produce and free him from the clutches of middlemen.

He asked why tobacco is not included under the purview of the bill and demanded so.

He also accuses the Congress of being hypocritical as it had promised the same in its manifesto.

"What is this hypocrisy. Why they are opposing these bills. They are nothing but.....," he said that led to uproar.

Ram Gopal Yadav (SP) said the BJP should ensure that it doesn't do anything that the future generations should hold them guilty of.

He said it was difficult to believe that these bills are being put forth by the son of a farmer.

Yadav alleged that there seems to be some compulsion that the ruling party does not want to discuss or debate on any of the bills, as it was rushing through these bills without discussion.

"You did not consult anyone before bringing these ordinances during the pandemic. You should have at least consulted the Bharatiya Mazdoor Sangh," he said.

T K S Elangovan (DMK) said the two Bills are an insult to farmers and were not necessary.

"This government has no right to bring these bills, as agriculture is a state subject. This bill also repeal the ordinance and the promise of this government to implement M S Swaminathan Committee's recommendations," he said.

K Keshava Rao (TRS), while opposing the bill, said the Agriculture Minister claimed that this is a Bill for new-age agriculture, but was against it.

Alleging that this bill seeks to change the very character of the country, he said, "you have made an agricultural country into a corporate country".

He said farmers will not have a level playing field as the bills seek to put the poor farmers against the traders.

"This government has set out to kill the golden goose," he said, accusing the government of not discussing the issue with states and people.

He also alleged that these Bills are an assault on state rights and the Constitution.

Ram Chandra Prasad Singh (JDU), while supporting the bills, said it is for the first time that a farmers' policy has come after a long time. He said in 1991 when the country saw liberalisation, it missed bringing agriculture reforms.

He cited the example of Bihar where the Nitish Kumar government has abolished the APMC Act in 2006 and yet farmers are getting good price for their produce through MSP and farmers are producing more.

He said farmers will get different options after the bills are passed. "I urge the Agriculture minister, both these bills are good tasks and agriculture will benefit from it. Please also do research to help increase the farmers' income," he said.