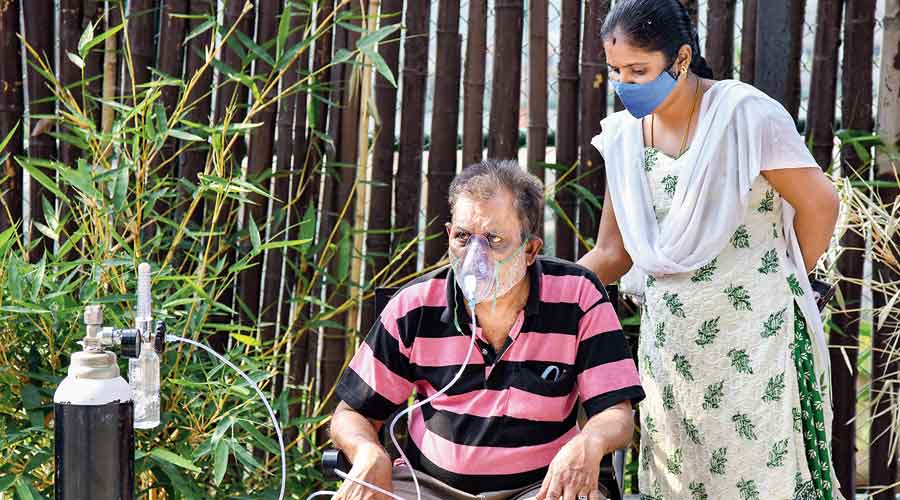 On June 4, the court had issued notice to the Centre and Delhi government on the plea which contended that the cause of death of the patients was respiratory failure due to insufficient supply of oxygen and not comorbidities as stated by a Delhi government committee
File picture
Our Bureau, PTI   |   New Delhi   |   Published 23.08.21, 02:36 PM

The Delhi High Court Monday granted additional time of six weeks to the Centre and Delhi government to file replies on a plea seeking CBI probe into the death of 21 COVID-19 patients at Jaipur Golden Hospital here in April allegedly due to oxygen shortage.

The court, which was hearing the plea filed by the families of some patients who died on the intervening night of April 23 and 24, also permitted the petitioners to file a rejoinder to the governments' responses.

By that time things will be clearer. We will see. You have approached the MM (Metropolitan Magistrate) also, said Justice Rekha Palli as the matter was listed for further hearing on December 9.

Senior advocate Rahul Mehra and standing counsel Kiritman Singh, appearing for Delhi government and the Centre respectively, sought to file their responses to the petition.

The aspect of criminal investigation was pending consideration before a magisterial court, Mehra said.

Advocate Utsav Bains, appearing for the petitioners, said that the aggrieved families before the high court and the magisterial court were not the same.

Singh said the Supreme Court was also seized of the issue of granting ex gratia compensation.

"File your counter. I'm not passing any interim order anyway," the judge said.

On June 4, the court had issued notice to the Centre and Delhi government on the plea which contended that the cause of death of the patients was respiratory failure due to insufficient supply of oxygen and not comorbidities as stated by a Delhi government committee in its report.

The petitioners claimed that the committee came out with an "erroneous" report that those who died did not suffer suffocation due to lack of oxygen supply.

The petition thus sought quashing of the committee's report and a direction for a probe by CBI or an independent agency into the deaths "so that the truth can be brought to light and justice be given to the deceased persons and their families" and they be provided compensation.

The plea alleged that the incident took place "due to deliberate inaction and failure of the respondents (Centre, Delhi government and the hospital) to provide adequate oxygen to the patients despite knowing that any shortage of oxygen supply would lead to their immediate death.

"As a result, the respondents herein have rendered themselves not only liable to pay compensation to the families of the deceased victims but also for criminal prosecution" for culpable homicide, the plea has said.

The petitioners also contended that the hospital did not even inform the family members about the shortage otherwise they would have arranged for at least high flow oxygen cylinders and this would have saved the life of their loved ones who died as the pressure in the cylinders was low.

It has contended that the Centre, Delhi government and the hospital "were under a legal and moral obligation to ensure no-one dies due to non-supply of oxygen".