However, the police have registered an FIR against unidentified people for ‘spreading false rumours about religious conversions’ 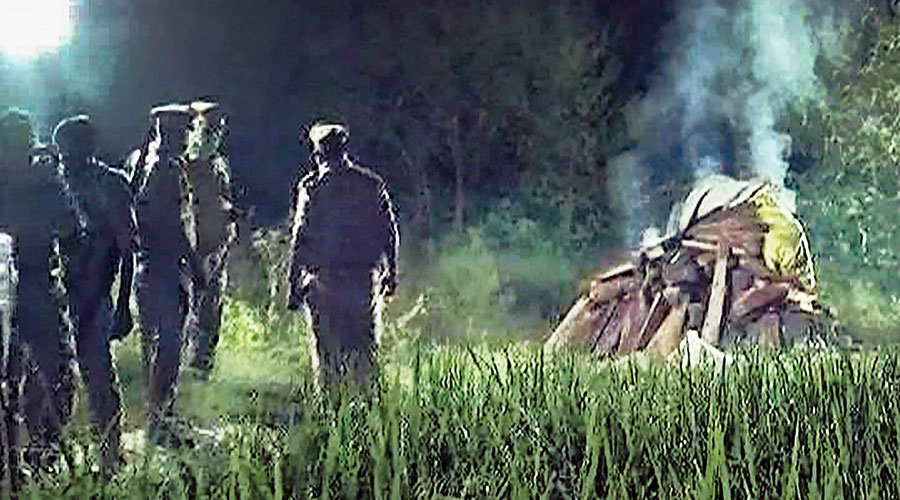 The Dalit girl died at a Delhi hospital on September 29 amid allegations that the police had refused to file rape charges for eight days and made no effort to get her the best possible treatment
File picture
Piyush Srivastava   |   Lucknow   |   Published 23.10.20, 01:07 AM

More than 200 Dalits in Ghaziabad have converted to Buddhism in protest against the Uttar Pradesh government’s treatment of the Hathras gang-rape-and-murder victim who belonged to their Valmiki caste, several Dalits from the area said.

However, the police on Thursday registered an FIR against unidentified people for “spreading false rumours about religious conversions”, and Ghaziabad additional district magistrate Ajay Shankar Pandey told reporters the “rumour” was being probed.

Rajratna Ambedkar, Bhimrao Ambedkar’s great-grandnephew and president of the Buddhist Society of India, had on October 16 tweeted pictures of the purported October 14 event.

He had written in Hindi: “A historic moment for the Valmiki community as they receive diksha (initiation) in Buddhism and the 22 vows (prescribed by Babasaheb Ambedkar for his followers).”

Accounts of the purported event, however, became widely known only on October 20 when a video was circulated on WhatsApp. It appeared to show people receiving diksha and then holding up a certificate from the Buddhist Society of India.

A member of the Valmiki caste who claimed to have adopted Buddhism at the event told reporters the way the state government had tried to protect the Rajput accused and bullied the Hathras victim’s family “made us feel that we don’t belong to the Hindu community”.

He said Rajratna had imparted diksha to the converts.

Another avowed convert was quoted as saying: “We held a meeting on October 14 at village Karhera in the Sahibabad area of Ghaziabad that was attended by 236 members of 50 Valmiki families from the neighbourhood. They were hurt that the police had initially refused to register a gang-rape case in Hathras and later burnt the victim’s body without the presence of her family. We embraced Buddhism at the meeting.”

While Indian law permits religious conversions, governments and the police have been known to harass converts and proselytisers by using the bogey of “forced conversion”.

A 19-year-old Valmiki girl was allegedly gang-raped and brutalised by four Thakur youths at her village in Hathras on September 14. She died at a Delhi hospital on September 29 amid allegations that the police had refused to file rape charges for eight days and made no effort to get her the best possible treatment.

The police then allegedly hijacked her body, took it to her village, locked the family up at their home and burnt the body after dousing it with a liquid from a jerry can, the forced and perfunctory “cremation” triggering outrage.

The police have claimed in a court affidavit that the girl was cremated in the presence of her family, without specifying who these family members were.

“Police and administrative officials bullied the family and journalists when they tried to tell the truth. It couldn’t have happened without the state government’s support,” one of the purported converts said.

He stressed, as the girl’s father had done, that the police’s act was “un-Hindu” since tradition requires unmarried Hindus to be buried rather than cremated after death.

“The entire episode made us feel that we don’t belong to the Hindu community. There was no point staying in the religion; so we decided to embrace Buddhism.”

He added: “The Thakurs of Hathras and adjoining areas kept holding panchayats in support of the rapists and killers for many days while Section 144 (which bans the assembly of five or more people) was in force. However, the police beat up those protesting the atrocity on the girl.”

The police said they had registered the FIR against “rumour mongers” on Thursday on a complaint from Montu Valmiki, a Sahibabad resident.

Nand Kishore Gurjar, local MLA from the BJP, said: “I have sent a complaint to chief minister Yogi Adityanath to probe the rumour of religious conversions. I believe that Delhi chief minister Arvind Kejriwal and Pakistan’s intelligence agency are behind this rumour.”

Resident doctors at Aligarh Muslim University’s Jawaharlal Nehru Medical College have demanded the reinstatement of two colleagues, who were allegedly sacked for speaking to reporters about the Hathras atrocity, PTI reported.

AMU authorities have denied any sackings and said the two doctors had been engaged “on a temporary one-month vacancy from September 9”, and the period had now ended.

The order ending the two doctors’ contracts was issued on October 20, a day after the CBI team probing the Hathras case visited the hospital, where the victim had been treated for a while.

Death of conscience: Rule of law and Hathras