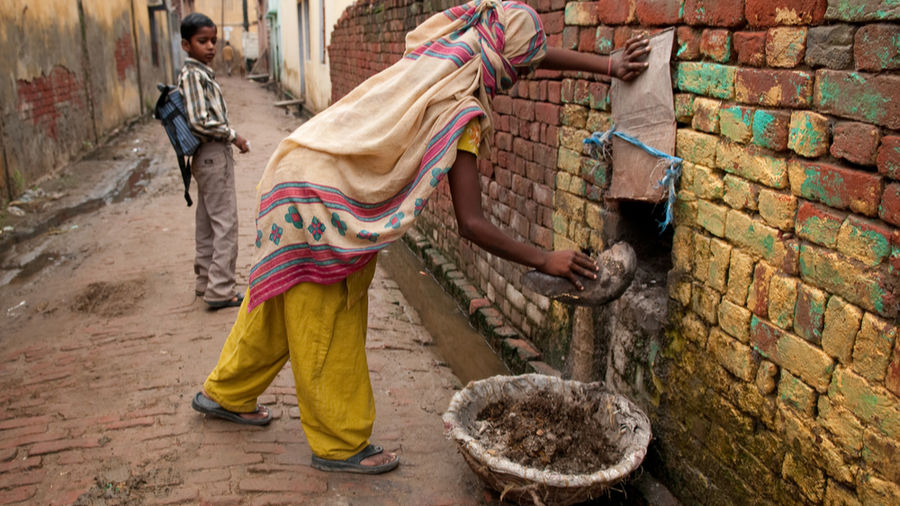 It is that time of the year again when Durga, the mother goddess, returns home. This year, Durga, the manifestation of strength (shakti), peace (shanti) and wisdom (buddhi), returns to take the place of a young Dalit girl — nineteen — perhaps a few years younger than her. The girl had gone to the fields in the Hathras district of Uttar Pradesh to cut grass which she would use to feed cattle, whose milk would be sold by her family to make ends meet. She was attacked, grievously wounded, denied immediate medical treatment and died two weeks later. In death, as in life, she was denied dignity, being cremated hurriedly in the middle of the night without most of her family around. Four upper-caste boys were arrested for her gang rape and murder.

Shakti in Hathras isn't the strength of character that Durga represents, but the strength of one's caste. In the aftermath of the incident, sordid stories of caste divisions have emerged from Boolgarhi village where the incident took place. According to ground reports, Dalit elders in Boolgarhi still customarily stand up when upper castes pass; Dalit children in school are expected to clean the premises as well because of which many of them do not go to school at all; shopkeepers frequently tell Dalit customers to stand apart; cremation grounds are separate; temple entry, despite the solemn promises of the Constitution, is often prohibited for Dalits. To be Dalit is to be deprived of strength — to read books, to buy groceries at the local store, to pray to god in a temple, to be human.

Shanti, in Hathras, is premised on this unequal social compact — of caste lines that cannot be crossed, hierarchies that must remain unchanged, and order that must be maintained, by violence if necessary. For the Uttar Pradesh government, this compact is maintained by the barrel of a policeman's gun. This is a time-tested script that privileges the need for order, retribution and security over dignity, empathy and humaneness. The threat to seize the property of anti-CAA protesters for voicing their dissent to a law, the 'encounter' killing of the gangster, Vikas Dubey, casting aside any illusion of the rule of law, and obstructing media persons and Opposition leaders from visiting the victim's family are telltale signs of a government that believes in the possibility of peace only by brute force.

The Uttar Pradesh government is a particularly egregious example of a government that seems indifferent to the rule of law, choosing instead to do 'whatever it takes' to preserve the social compact. But it would be myopic to think that it is the only one. Such examples abound across the political spectrum in various states. The underlying factor, that makes such methods commonplace, is a design choice in the Constitution itself.

The Constitution, as Sandipto Dasgupta has observed, may be usefully seen as a document drafted from the perspective of facilitating the management of conflicts by an administrative State. Consequently, an overriding concern of the drafters of the Constitution, discernible through many of their debates and reports, was the need to ensure law and order. This is why a chapter on fundamental rights of individuals has a detailed provision authorizing preventive detention of individuals; why widely-worded emergency provisions from the colonial-era Government of India Act, 1935 continue to find place in the Constitution while the document is conspicuously silent on trammeling wide powers of the police to search, seize and arrest individuals. The UP government may often defy the protections the Constitution has for citizens, but it is, like governments before and after it, the child of a Constitution that has special reverence for a strong State that ensures law and order.

In Hathras, as in Hyderabad last year, and in Delhi in the aftermath of the rape and murder in 2012, it is the institutions of constitutional modernity — a free media and an impartial judiciary — that have often come up short. These institutions, which manifest the buddhi of India's constitutional vision, were the checks and balances that were supposed to tether lawless governments to the rule of law.

But today, lengthy judicial processes appear anachronistic in an age of instant judgment. The tardiness of the regular criminal processes  — the Allahabad High Court under whose jurisdiction Hathras falls has 1,89,649 criminal appeals pending (and increasing every day) — means that in high-profile cases, the court can rarely do its own job of determining guilt expeditiously, let alone pull up shoddy investigation by a recalcitrant police. Even the most thorough investigation and expedited court process as seen in the Delhi gang rape case took over six years to be completed. In the Hathras case too, it is unlikely that the judicial process will be completed any quicker. This is simply not good enough today.

At the same time, the challenges for the judiciary are not restricted to mitigating delays alone. No matter how quickly a criminal trial can be completed, it will never be quick enough to satiate public angst. What is needed instead is judicial decisiveness, demonstrating to the country that justice is being done. For a judicial system traditionally shy of publicity and used to operating in the opacity offered by legalese, this is an existential challenge. Particularly in cases with wide public interest, courts will have to think of writing judgments in simple language, translating judgments into vernacular languages, issuing official media summaries, and demonstrating a firm commitment to judicial rectitude through hearings. These are only indicative suggestions that it cannot remain business-as-usual. Courts will have to think long and hard on how to speak truth to State power under difficult circumstances.

Such introspection is also the need of the hour for the media. With social media privileging hate and sensationalism over balance and nuance, mainstream media has largely taken the cue to become shriller and louder. In the Hathras case too, social media was rife with conspiracy theories on how the victim was in a covert relationship with one of the accused; several mainstream media channels alleged their own political conspiracies all of which have made the victim a political football to be kicked about for petty partisan gain. In this environment, no news appears to be an objective assessment of the facts any more. This leads to a further sealing of echo chambers that make truth-telling itself appear like a motivated enterprise.

The rule of law is founded on the rule of facts. But when every fact the media puts out appears partisan, when courts are too slow and often timid, and when governments think of the death of a girl first and foremost as a political issue, the rule of law is dead. We might as well give it a dignified cremation, which would be more than what the victim received.

I had ended my column last month with a question: "would Abhagi, a Duley , (from Saratchandra’s "Abhagir Swarga") have been able to fulfil her simple last wish of a cremation with dignity in our modern constitutional republic?" I had hedged my response saying there wasn't an easy answer. Only a month later, it's become crystal clear that I was wrong. Durga is Abhagi today. Let us bow our heads this year, not in reverence, but in shame.