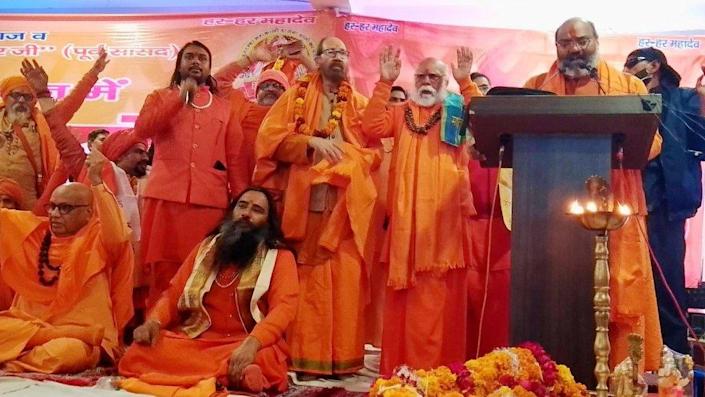 The Supreme Court Thursday expressed concern over the holding of events like Dharam Sansad at various places which allegedly is disturbing communal harmony.

"Before they ask to sensitise others they have to sensitise themselves first. They are not sensitised. This is something which is spoiling the whole atmosphere," observed a bench of Justices Ajay Rastogi and Vikram Nath.

The bench observed while seeking a response from the Uttarakhand government on a bail plea filed by an accused concerning the Haridwar Dharma Sansad case involving alleged inflammatory speeches made against Muslims.

The notice was issued to the state government and others on the bail plea filed by Jitendra Narayan Tyagi alias Waseem Rizvi.

Senior advocate Sidharth Luthra, appearing for Tyagi, said he has seen the videos where people in "Bhagwa" clothes got together and gave speeches.

Luthra submitted that Tyagi had been in custody for almost six months now and he is suffering from ailments.

He said the maximum sentence was three years in the case filed against Tyagi.

The counsel for the complainant opposed the plea and said Tyagi was trying to send out a message that he is not afraid of the law.

Tyagi had approached the top court after the Uttarakhand High Court dismissed his bail plea in March this year.

The case against Tyagi and others had been lodged on the complaint of Nadeem Ali, a resident of Jwalapur Haridwar at Haridwar Kotwali on January 2, 2022.

He had alleged in his complaint that Dharma Sansad/Religious Parliament was organised in Haridwar by Hindu sages from December 17 to 19 and in the garb of this event, the participants were instigated to wage a war against Muslims.

Objectionable words were used against the holy Quran and Prophet Mohammad, Ali had said in his complaint, adding these provocative statements had later gone viral on social media.

These videos were circulated by Wasim Rizvi alias Jitendra Narayan Tyagi, Yati Narsinghanand, and others, he had alleged.

The FIR also alleged that an attempt was made by Prabodhanand Giri to spread violence against the people living in Haridwar's mosques.