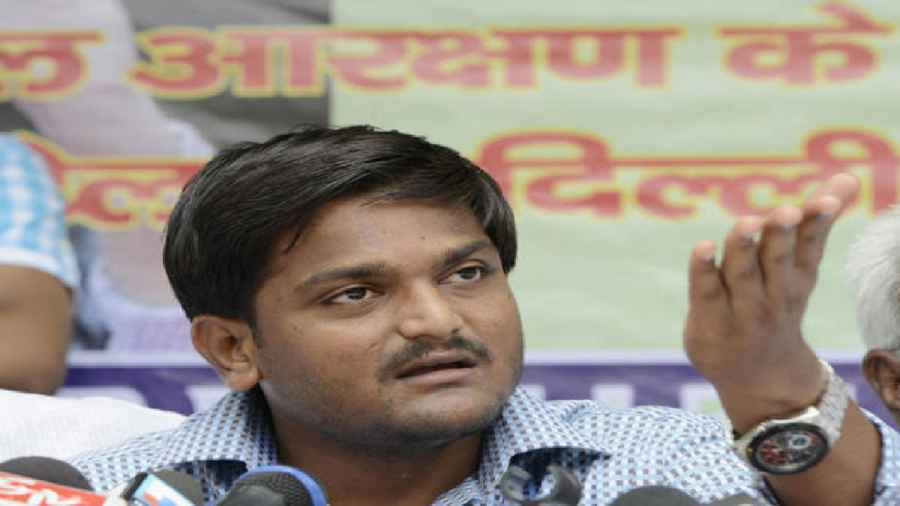 Gujarat Congress working president Hardik Patel on Monday removed his designation and party poll symbol of 'hand' from his Twitter profile amid mounting speculation that he may leave the opposition party ahead of the Assembly polls due later this year.

The removal comes days after Patel expressed displeasure over the functioning of the state party leadership. The firebrand leader, who spearheaded the Patidar community agitation in Gujarat for reservation in jobs and education, has described himself as a "Proud Indian patriot" in his new profile on Twitter.

Patel is miffed with the state leadership of the Congress and has been publicly voicing his displeasure over its functioning in Gujarat, where assembly polls are due by the year-end.

"Hardik (Patel) tweeted yesterday. As soon as I learnt about his tweet, I called him immediately and said, 'we came to know about your grievances from the media. Let us sit down and talk about whatever complaints you have'," Thakor told reporters here.

The Gujarat Congress president said he has reached out to Patel over the phone every time he came across his statement against the party, asking him to meet and discuss the matter.

Thakor said Patel has assured to meet him as soon as he is free from his prior engagements.

"I called him last week, and again yesterday. Last time he said he was busy with the death anniversary of his father. Later, he said he was in Surat, and he will meet as soon as he is free," he said.

"Dialogue is the best way to resolve differences, this is what we and the high command believe in," Thakor further said.

Recently, Patel, a prominent Patidar leader who spearheaded a statewide agitation demanding reservation in jobs and education for his community, went public with his praise for the working style of the BJP and criticised the state Congress leadership.

On Tuesday, he tweeted, "I am in Congress currently. I hope the central leaders find a way so that I continue to remain in the Congress. There are others who want Hardik to leave the Congress. They want to break my morale."

A few days back, Patel had told the media, "We will have to acknowledge that recent political decisions taken by the BJP show that it has a better political decision-making capacity. I believe that without praising it, we can at least acknowledge the truth. If the Congress wants to become strong, it will have to improve its decision-making capacity."

The Gujarat Congress working president has, however, clarified he had no complaints against party MP Rahul Gandhi and his grievances were only with the state leadership and that he was not quitting the party.

In a tweet, he had said, "I am not joining any other party. I am not angry with Rahul Gandhi. State leadership and in-charge are ignoring thousands of party loyalists like me, which is harming the future of Congress and Gujarat." The Patidar leader had joined the Congress ahead of the 2019 Lok Sabha elections and was later made the working president of the party's state unit.