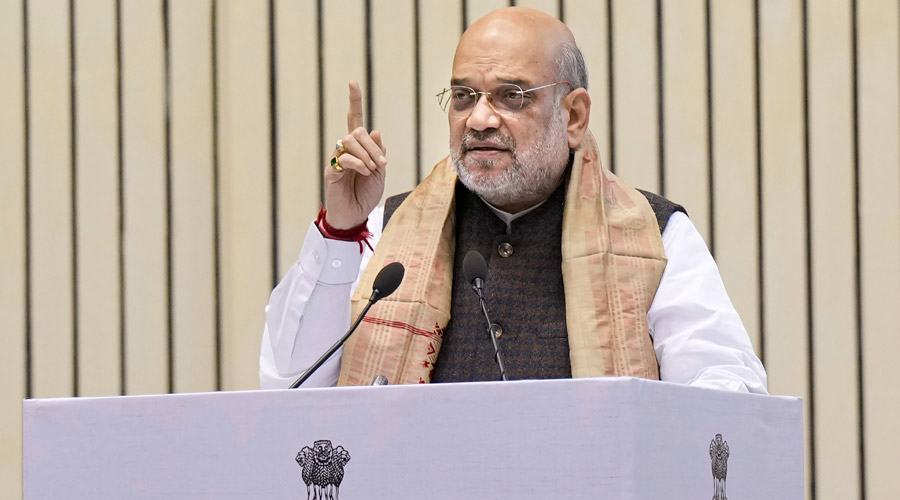 The Election Commission has sought the opinion of the chief electoral officer of Gujarat after multiple complaints, including from a former Union economic affairs secretary, against Union home minister Amit Shah for his “permanent peace” speech on the riots of 2002 on the campaign trail last week, a source said.

“The complaint is under process in the zonal division concerned,” the source at the Election Commission told The Telegraph on Monday, adding that the panel was in touch with Gujarat’s chief electoral officer, P. Bharathi.

E.A.S. Sarma, the former economic affairs secretary at the Centre, had asked the commission to investigate Shah for violating the Model Code of Conduct and defer the polls scheduled on December 1 and 5 in the state.

Shah’s statement, “if it is found to be true, violates the Model Code of Conduct in force, especially with reference to the following clause, ‘There shall be no appeal to caste or communal feelings for securing votes’,” Sarma had written to the commission.

On November 25, the PTI news agency had quoted Shah as saying: “Through such riots, the Congress strengthened its vote bank and did injustice to a large section of society. But after they were taught a lesson in 2002, these elements left that path (of violence). They have refrained from indulging in violence from 2002 to 2022. The BJP has established permanent peace in Gujarat by taking strict action against those who used to indulge in communal violence.”

The Nanavati and Mehta commission had counted 1,025 casualties in the Gujarat riots. No Congress leader was charged. Former Congress MP Ehsan Jafri was among those murdered in his home by rioters. Several Sangh parivar sympathisers, including BJP minister Mayaben Kodnani, were convicted. Kodnani’s conviction was later overturned by Gujarat High Court.

The CPM and the All India Majlis-E-Ittehadul Muslimeen, too, had condemned the Union home minister’s remarks. Besides Sarma, the founder of the poll watchdog, Association for Democratic Reforms, Jagdeep Chhokar, had complained to the EC.

CPM general secretary Sitaram Yechury had tweeted on Saturday: “This is brazen justification of murders of innocents. Proudly upholding incendiary criminal acts means prejudicing ongoing legal proceedings against criminals. This is done to cynically sharpen hate during elections.EC, as is its practice these days, is a silent spectator.”

On the same day, Sarma asked the EC to investigate Shah. “Shri Shah’s statement needs to be viewed by the Election Commission in conjunction with the reported fact that it was the Union Home Ministry that cleared the release of the eleven rape convicts in the Bilkis Bano case, directly related to the infamous Godhra incidents in 2002, which triggered the shameful sequence of events that shook the nation’s conscience.”

Sarma added: “By token penalties imposed, the Commission may not be able to undo the considerable damage that would have already been caused, in which case, the only course of action left to the Commission is to consider deferment of the elections, till such time that the environment becomes conducive to conducting elections freely and fairly.”

He questioned the EC’s silence on the recent amendment to allow a fresh sale of electoral bonds, and its declaration of the Gujarat polls three weeks after Himachal Pradesh’s. The delay in declaring the polls, he said, “indirectly (perhaps coincidentally!) gave licence to the local authorities in Gujarat to go ahead with premature inauguration of the dangerous, incompletely restored Morbi bridge” — the collapse of which claimed over 130 lives.

In his complaint, Chhokar quoted Sarma’s complaint and additionally alleged that the speech “attracts section 8 of the Representation of the People Act, 1951, and... is in violation of section 153A of the Indian Penal Code…” (promoting enmity between different groups on ground of religion, race, place of birth, residence, language and indulging in acts prejudicial to maintenance of harmony).

He demanded the deferment of the polls as well as an FIR against Shah.