The affidavit filed on Friday was based on a confidential statement recorded earlier by Swapna Suresh, a key accused 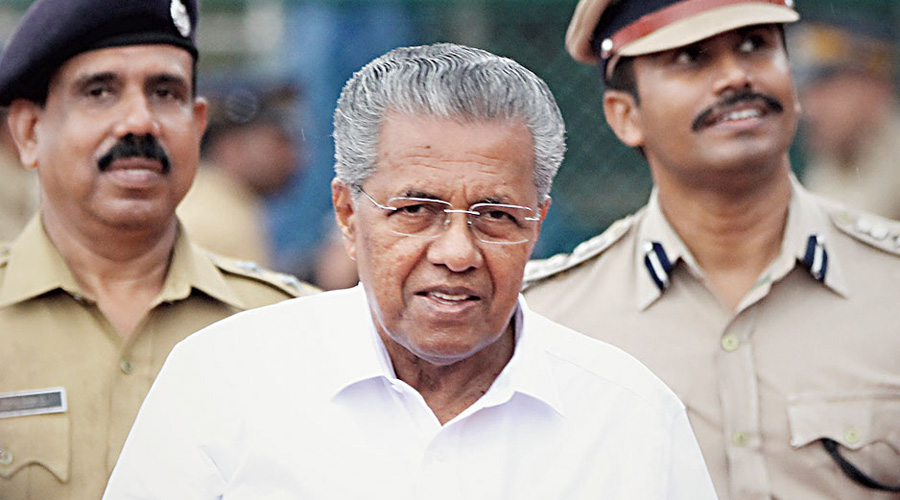 The customs department has informed Kerala High Court that a key accused in a gold-smuggling case has named chief minister Pinarayi Vijayan, among others, for their close connections with a UAE consul general and “illegal money transactions.”

The affidavit filed on Friday was based on a confidential statement recorded earlier by Swapna Suresh, a key accused in the gold-smuggling case.

“She (Swapna) has made shocking revelations about the chief minister’s close connections with the previous Consul General of the UAE and illegal money transactions carried out,” customs commissioner Sumit Kumar said in a statement filed before the court.

“She has also stated with clarity about the smuggling of foreign currency at the instance of Hon’ble Chief Minister, and Hon’ble Speaker with the help of the Consulate. She has also clearly stated about the improper and illegal activities of 3 Hon’ble Ministers of the state cabinet and the Hon’ble Speaker,” the statement told the court.

While Speaker P. Sreeramakrishnan was already under fire for his friendship with Swapna, who used to be a secretary at the UAE consulate, the statement did not name the three ministers.

Swapna is a key accused in the attempt to smuggle 30kg of gold valued at Rs 14.82 crore in a diplomatic parcel addressed to the attache of the consulate general of the UAE in Thiruvana­nthapuram. The airport customs had busted the attempt in July 2020.

The alleged smuggling of US dollars is related to a kickback scam involving a local builder and some consulate officials who were entrusted by Emirates Red Crescent to build new homes for victims of the 2018 floods in Kerala.

They had allegedly smuggled the dollar bills from Thiruva­nanthapuram to a Gulf country.

With just a month to go for the April 6 state elections in which the ruling Left Democratic Front is widely forecast to win a second consecutive term in office, the statement instantly revived the debate around the gold smuggling and related scandals.

The customs statement cited Swapna as admitting that she was privy to the discussions between those named in her statement and the UAE consulate official since she was the interpreter of the conversations that transpired in Arabic and Malayalam.

But the statement made it clear it had no concrete evidence and only Swapna knew what transpired.

“It may kindly be noticed that most of the facts revealed in the statement are matters which are exclusively within the personal knowledge of the 1st respondent (Swapna) and can be tendered as evidence in appropriate proceedings only by her.”

While the customs had subjected her to various spells of custodial interrogation, she revealed the alleged involvement of the high-profile leaders during the last interrogation from November 25, 2020. Subsequently, she recorded the statement before a magistrate.

This was just days after an audio clip leaked on November 19, 2020, with the voice purportedly that of Swapna lamenting how some officials of a central agency were coercing her to name the chief minister in the scandal in exchange of being made an approver.

In the 35-second audio clip that found way to the media, Swapna was heard saying:  “They did not allow me to read the statements since sixth (not clear which month)…(but) asked me to sign after quickly scrolling (the pages).”

“They (investigators) are asking me to ratify that (statement in court) to make me an approver. When I said I will never do that, I was told they will come to jail and force again,” she had said sparking a massive outcry against the conduct of the agencies.

Leader of the Opposition Ramesh Chennithala of the Congress wasted no time in demanding the chief minister’s resignation. “This is a shocking revelation. The contents of this affidavit clearly shows how relevant were our earlier demand that the chief minister should resign. The chief minister does not have the right to continue in power even for a minute. This chief minister has committed treason.”

But the ruling LDF came down heavily upon the customs for trying to cover up the overall failure of three central agencies in unearthing solid evidence against anyone.

Convener of Left Democratic Front A. Vijayaraghavan slammed the customs department for trying to discredit the chief minister and the state government ahead of the election.

“The customs has taken over the political campaign of the BJP and UDF (Congress-led United Democratic Front),” he said informing that the LDF would march to the customs offices on Saturday.

“The objective of filing a statement in the high court citing a confidential statement by one of the accused is as clear as day light…Central agencies have degenerated to being mere tools of election campaign,” the CPM state secretariat said in a statement.