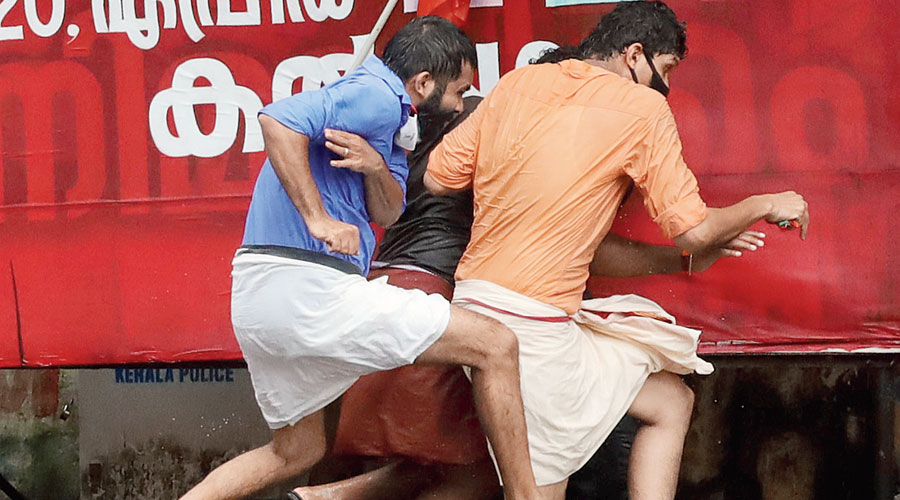 The BJP, which has been targeting the Left government in Kerala over a high-profile gold smuggling case, has begun to face unpalatable questions itself over the controversy.

Sandeep Nair, a Thiruvananthapuram resident named in the FIR filed on Friday by the National Investigation Agency, has been linked to the BJP. O.G. Hari Raj, a cargo clearing agency owner who has been questioned by customs officers on the suspicion that he had tried to get a “diplomatic baggage” with 30kg of smuggled gold cleared at Thiruvananthapuram airport last Sunday, has also been sympathetic to the Sangh ideology on social media, his posts suggest.

The Facebook page of Sandeep, who has been named by prime suspect P.S. Sarith and who is absconding, has a picture of him hugging veteran BJP leader Kummanam Rajasekharan. The BJP had said the politician had merely posed with a citizen and denied any link with Sandeep.

However, the party suffered a setback when Sandeep’s mother told reporters on Thursday that he was an active member of the BJP.

Raj, who had sent a text message to a customs official who had held back the baggage at the airport, has been linked to the RSS-affiliated Bharatiya Mazdoor Sangh by CPM leaders, a charge he and the BMS have denied.

“I had sent a message to the joint commissioner to know why the baggage was delayed. I contacted the officer in my capacity as the president of the Customs Clearing Agents Association. I did not know that the baggage was held back and it contained gold,” Raj had told a Malayalam channel.

“I am neither with the BMS nor with the BJP. This is a political game,” he added.

The NIA, which was on Thursday mandated by the Union home ministry to probe the smuggling case, has contradicted the statement issued by V. Muraleedharan, minister of state for external affairs and a BJP leader from Kerala, who had said it was not a diplomatic baggage. The minister had said the baggage was meant for a diplomat, which was not the same as “diplomatic baggage”.

“The aforesaid consignment was found camouflaged in diplomatic baggage from the UAE that is exempted from inspection as per the Vienna Convention,” the NIA said in its FIR.

“We also want to know what prompted Muraleedharan to call it an ordinary parcel and not a diplomatic baggage? Now that the NIA has confirmed it as one, he should explain why he tried to alter the description of the baggage that contained contraband,” Rajesh added.

He said a lawyer who appeared for Swapna Suresh, one of the accused, was the Ernakulam district president of the Hindu Economic Forum. “What made a lawyer from such a group represent a person charged under the UAPA? What I want to know is whether it is fine for the BJP and the Sangh parivar to have their man represent a person accused in such a case,” the CPM leader added.

The NIA has registered the FIR in the gold smuggling case under sections of the Unlawful Activities (Prevention) Act, an agency spokesperson said. Former employees of the UAE consulate, Sarith and Swapna; Fazil Fareed, another accused; and Sandeep have been named in the FIR.

Sources said the brother of a prominent leader of an Opposition party in Kerala was allegedly involved in the trading of smuggled gold under the cover of his textile shop in Kozhikode.