Global chorus in support of farmers

On Tuesday, 75 organisations from the US and elsewhere brought out a full-page advertisement in The New York Times bearing a solidarity message 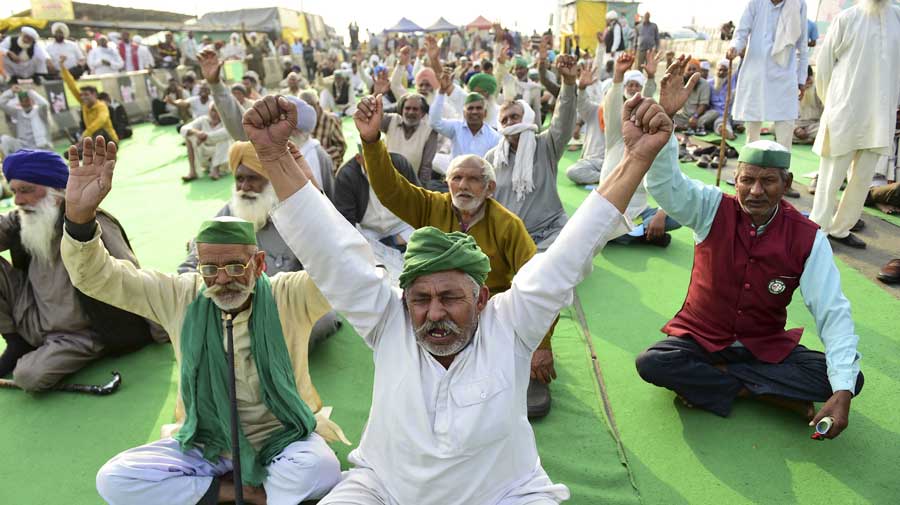 Farmers during their agitation against the three farm laws at Ghazipur border in New Delhi on Monday.
PTI
Our Special Correspondent   |   New Delhi   |   Published 18.02.21, 01:27 AM

India’s official effort to silence condemnation from overseas of the farmers’ protests by telling critics to keep off the country’s “internal matters” does not seem to have drawn the desired result going by the continuing chorus of support for the peasants.

On Tuesday, 75 organisations from the US and elsewhere brought out a full-page advertisement in The New York Times newspaper bearing a solidarity message for the farmers.

Paid for by the Ohio-based Justice for Migrant Women, the advertisement is essentially a solidarity statement of activists, farmers and civil society that also urges “all people who champion human rights — in the United States and around the world — to join us and condemn the abuses against farmers, labourers, and protesters in India”.

Providing details about the protests, the advertisement further urges readers to “use your voice to call on India to respect the core principles of democracy, including the rights of all people to protest peacefully, demand accountability, and envision a safer, healthier, and more just future for all people on the planet”.

The advertisement seeks to draw attention to the Indian government response to the protests that have remained largely peaceful despite their prolonged nature.

“Yet they have faced violence, persecution, and retaliation by the government. The protest sites, at times, have been cut off from water, aid, and electricity. Internet services have been strategically suspended to silence dissent. Media outlets have been censored and threatened. Protesters, activists, and journalists have been arrested, assaulted, and held in indefinite detention.”

Earlier on February 3, after Barbadian singer Rihanna and climate change activist Greta Thunberg tweeted in support of the farmers, the external affairs ministry had issued a rather political statement asking people not to rush to comment on such matters without ascertaining the facts and a proper understanding of the issues at hand.

This has not silenced voices overseas. If anything, the subsequent actions of the government, including the arrest of Bangalore-based climate activist Disha Ravi, have only served to keep the focus on India as is evident from the detailed article on her arrest in the international pages of The New York Times on Tuesday.

A sustained critic of the government’s response to the farmers’ protests and its subsequent actions is Meena Harris, niece of US Vice-President Kamala Harris.  On Tuesday she tweeted about Disha’s arrest and said: “What is happening in India is terrifying. Please pay attention.”

Explaining the rationale for initiating the letter of support for farmers, the founder-president of Justice for Migrant Women, Monica Ramirez, said in a statement: “India’s response to these peaceful demonstrations run counter to the fundamental values shared by all democracies — among them freedom of expression, protest, and the press, as well as the fundamental dignity of all people — and it is time that we all lend our voices to speak against this unjust treatment with those who are fighting for their lives and livelihoods.”