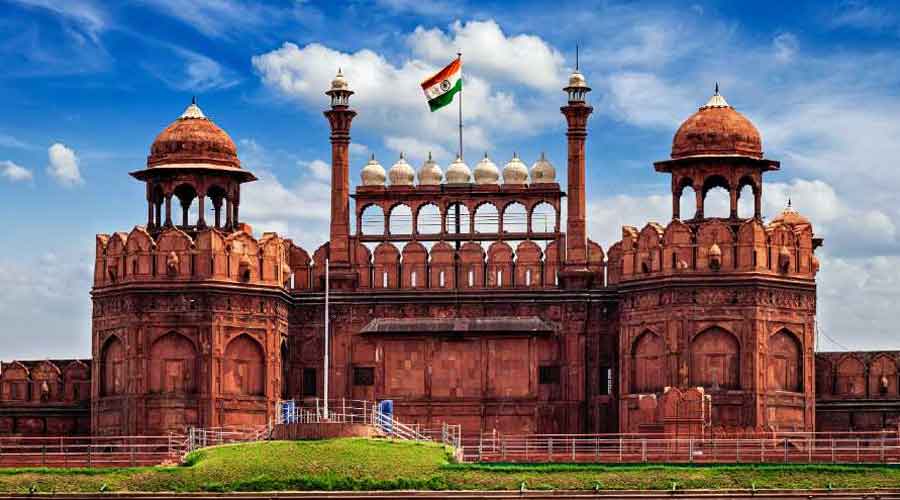 A giant mural on Mahatma Gandhi and other freedom fighters along with thematic artworks depicting India's military might, technological achievements and cultural heritage was on display at the main gate of the Red Fort here for the 75th Independence Day celebrations.

The makeshift wall of shipping containers was set up for security reasons but artists had turned the stacked metallic containers into eye-catching canvases with a strong patriotic theme.

It was for the first time that such a temporary fortification was done on the occasion of Independence Day, a move that came after farmers protesting against three central agri laws had stormed the Mughal-era monument, which is also a UNESCO heritage site, on Republic Day and hoisted a religious flag.

The organisers had ensured that the dull industrial objects served as a backdrop for creating appealing artworks.

The face of the towering stack of containers, opposite the 17th-century fort's magnificent front wall was adorned with a mega mural depicting freedom fighters -- Mahatma Gandhi, Sardar Vallabh Bhai Patel, Netaji Subhas Chandra Bose, Bhagat Singh, Rani Laxmibai, and scores of other unsung heroes who made the supreme sacrifice for the country's freedom from the British Rule.

The slogan 'Rashtra Pratham' (in saffron letters), Sadaiv Pratham'(in green letters)' had been mounted in huge size on top of the stack.

On the side facing the main street (Netaji Subhas Marg), the middle section had a fabric canvas with thematic artwork printed depicting the cultural heritage and diversity of India, with 75th Independence Day embossed on it.

The stack of containers facing the street and flanking the middle section was coloured in saffron-white-green, depicting the tricolour, in succession vertically, and a smaller blue container was kept on top of both the left and right sides.

On the front wall of the fort, a decoration was mounted with two peacocks on either side and the numeral 75 adorned on it, marking the 75th Independence Day.

The multi-layered security ring, including NSG snipers, elite SWAT commandos, kite catchers, canine units and sharpshooters on high-rise buildings, were placed around the Mughal-era fort, and social distancing norms were in place as last year due to the Covid-19 pandemic.