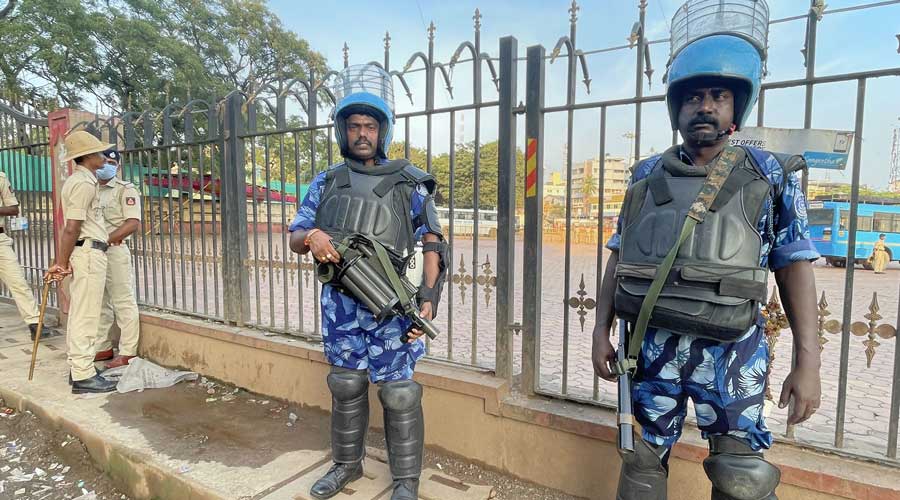 Ganesh Chathurthi was celebrated at the Idgah grounds at Hubbali on Wednesday amid tight security arrangements, hours after the Karnataka High Court gave the go ahead  by noting that a Supreme Court freeze on celebrations at the Bangalore Idgah  was not applicable.

Amid chants of vedic hymns, Sriram Sena chief Pramod Muthalik along with his supporters installed the idol of Lord Ganesha and offered prayers on the occasion.

"We performed the prayers within the legal framework. Some miscreants had attempted to stop us but we performed our puja, which is not only a matter of joy for the people of Hubballi but also across north Karnataka," Muthalik told reporters at the puja pandal in Hubbali.

Muthalik termed the day as 'historic' as the long-cherished dreams of the Hindu community were fulfilled.

According to him, the district administration has granted permission to conduct pooja for three days at the site. Elaborate security arrangements were made at the Hubbali Idgah ground to avert any untoward incident.

In a late-night hearing on Tuesday, the High Court upheld an order of the Dharwad municipal commissioner allowing the Ganesh Chaturthi festival to be held at the Idgah maidan in Hubbali.

Justice Ashok S Kinagi held that the property belonged to the Dharwad municipality and Anjuman-e-Islam was only a lease holder for a period of 999 years at a fee of Re 1 per year.

Anjuman-e-Islam had claimed that the property in question was protected under the Places of Worship Act, 1991, which says no religious place of worship can be converted. The high court said in the case of the property in question, it was not a religious place of worship and was allowed for prayers only during Bakrid and Ramzan. During other times, it was used for purposes like a marketplace and a parking lot.

The Supreme Court order of status quo in the Bengaluru Idgah Maidan at Chamrajpet was also not applicable to this case, the high court said.

The Chamrajpet issue involves a dispute about the ownership of the property, whereas the Hubballi ground belongs to the municipality, which Anjuman-e-Islam has also acknowledged, the court pointed out.

It had said if there was a Supreme Court order on the Bangalore Idgah issue, the same could be mentioned before it.

The apex court ordered for status quo in the Bangalore issue and the Ganesh Chaturthi festival set to be celebrated by the state government had to be withheld.

The matter was mentioned in the Hubballi case. Justice Kinagi heard the matter at his official chamber at 10 pm. After hearing the parties, including the state government advocate, he dictated the orders at 11.15 pm on Tuesday.

SC: No Ganesh Puja at Idgah