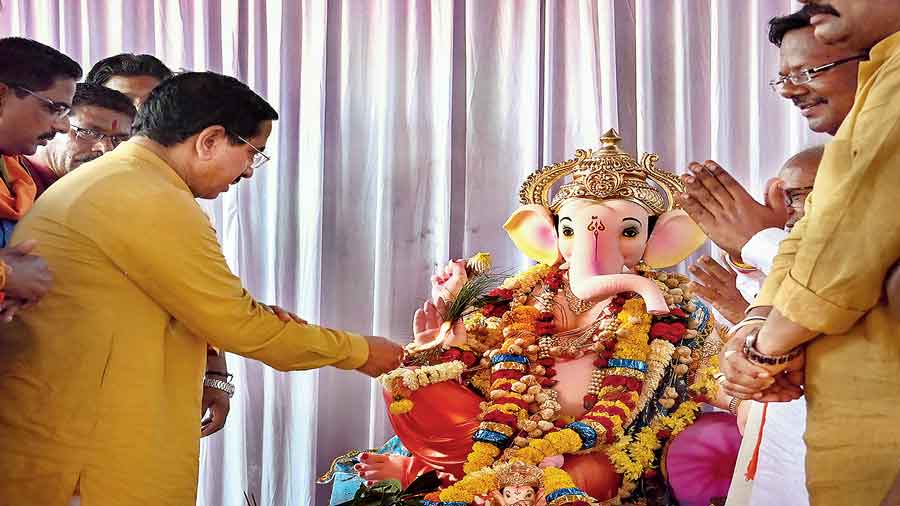 Union minister Pralhad Joshi was among those who offered prayers to Lord Ganesha when Ganesh Chaturthi was celebrated for the first time on the Idgah Maidan at Hubli in BJP-ruled Karnataka on Wednesday.

Karnataka High Court had late on Tuesday night paved the way for the performance of the Ganesh Chaturthi rituals on the ground, which has an Idgah and where Id has traditionally been celebrated for decades.

Some described the day as “historic” and said it marked “new-found freedom”.

Joshi, the Union parliamentary affairs and coal and mines minister who represents Hubli’s twin city Dharwad in the Lok Sabha, advocated peace but referenced a tragic incident that took place 28 years ago.

“Today, an idol of Ganesh has been installed here after a long struggle. But exactly three decades ago, a movement to hoist the national flag was started here. On that day (the Independence Day of 1994), there was a lathi-charge here. Six persons had sacrificed their lives on that day. I want to make only one request, let us celebrate this peacefully,” Joshi said.

The six had died in police firing. Strife was brewing in the aftermath of the Babri Masjid demolition when BJP politics had made a breakthrough and the Maidan had become one of the many staging fields of its activities.

B.S. Yediyurappa, who later went on to become Karnataka chief minister, and Uma Bharti had led the agitation for “their right to hoist the Tricolour” at the Idgah Maidan. They were among the 21 party leaders booked for arson, rioting and attack on public servants in 10 different cases. A local magistrate’s court had then declared Uma a “proclaimed offender” for not honouring summons.

She resigned as Madhya Pradesh chief minister in August 2004 to appear before the court in Hubli, which had issued a non-bailable arrest warrant for ignoring repeated summons.

The Congress government helmed by S.M. Krishna had in 2002 applied to withdraw all the cases considering the emotive nature of the issue.

On Tuesday night, Karnataka High Court, hearing a plea by the educational and social organisation Anjuman-e-Islam, refused to stay the permission granted by the Hubli-Dharwad municipal commissioner to some Hindu organisations to perform Ganesh Chaturthi rituals at the Idgah Maidan.

The order by Justice Ashok S. Kinagi came around 11.30pm, hours after the Supreme Court had held a special hearing beyond usual working hours to reverse the Karnataka government’s decision to allow Ganesh Chaturthi celebrations on another Idgah Maidan, in Bangalore’s Chamarajpet, where only Id and Ramzan-related rituals have been held for 200 years.

The Idgah Maidan in Hubli has witnessed a protracted legal battle between the Anjuman-e-Islam and Hindu groups for over two decades.

The municipal commissioner’s decision was based on a 2012 Supreme Court verdict that upheld the municipality’s claim on the land. The apex court had, however, allowed Muslims to continue to use it to offer prayers on Id-Ul-Fitr and Id-Ul-Zuha every year.

Other than these religious rituals, which the Anjuman-e-Islam says have been taking place there since the pre-Independence period, the Idgah Maidan has been used only to hoist the national flag on Independence Day and Republic Day in civic body-sponsored events. During other times, the land is used as a parking lot and a marketplace.

The high court noted that the property belonged to the local municipality and the Anjuman-e-Islam was only a licencee allowed to perform prayers on the two Id days every year. The court rejected the petitioner’s submission that the Idgah Maidan fell under the purview of The Places of Worship (Special Provisions) Act, 1991, and cannot be used for rituals of another religion.

Equipped with the high court order and under heavy police protection, a group named the Rani Chennamma Maidan Gajanana Utsava Samithi installed a Ganesh idol at the Maidan at 7.30am on Wednesday, marking the first-ever Hindu festival on the property.

Samithi president Sanju Badskar told The Telegraph that thousands of people visited the Maidan for the Ganesh puja.

“Some 3,000 people, mostly youths, arrived by noon today to participate in the Ganapati festival. It was like new-found freedom for them,” said Badskar, who is also the Hubli-Dharwad president of the Vishwa Hindu Parishad.

Amid chants of vedic hymns, Sriram Sena chief Pramod Muthalik and his supporters also offered prayers at the Maidan.

“We performed the prayers within the legal framework. Some miscreants had attempted to stop us but we performed our puja, which is not only a matter of joy for the people of Hubli but also across north Karnataka,” Muthalik told reporters at the pandal.

Muthalik termed the day “historic”, claiming that a long-cherished dream of Hindus had been fulfilled. According to him, the district administration has granted permission to conduct puja for three days at the site.

Badskar said the Samithi had no plans to hold the Dussehra festival in early October at the Maidan, but did not rule out other outfits doing so.

“Our objective was to celebrate Ganapati festival and we have no plans to hold Dussehra festivities here. But other organisations could seek permission since it is the property of the municipality, which can permit anyone to organise any event on their land” he said.

Anjuman-e-Islam president Mohammed Yusuf Savanur said he would file an appeal before a two-judge bench of Karnataka High Court to stop the municipality from granting permission for non-Muslim festivals at the Maidan.

“We will be filing an appeal in three or four days and file a case against the municipal commissioner for violating The Places of Worship (Special Provisions) Act,” he said.